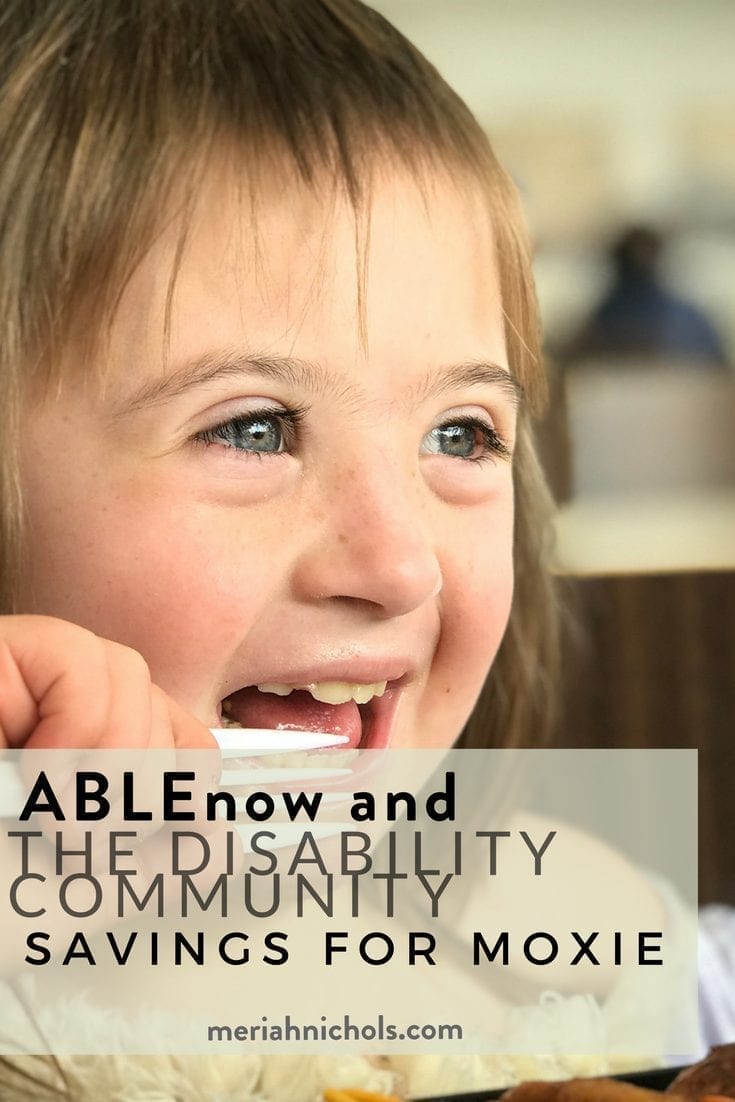 This is a sponsored post written by me on behalf of ABLEnow. The fact that they are sponsored this is icing, because I was writing this post anyway. I’ve set up an account with them because I wanted to; all opinions in this post are my own.

Legend has it that some parents from the Down syndrome community were sitting around a kitchen table one night, talking about the future of their children, SSI and pitfalls of the system. Most all parents of a person with Down syndrome can relate to this type of informal round-table conversation. Heck, most anyone living with a disability in the United States can relate to this type of conversation, because SSI (Supplemental Security Income) is, after all, the major financial safety net for people with disabilities living in the US, is closely linked to Medicaid, and comes with rigidly-enforced and rigorous caps to financial savings and assets.

The system is a nightmare

If you are a parent of a child with Down syndrome or other Intellectual Disability, it’s a nightmare you are forced to navigate if you want to make sure your child will be financially secure after you pass away.

Back to that group of parents sitting around the table, talking. 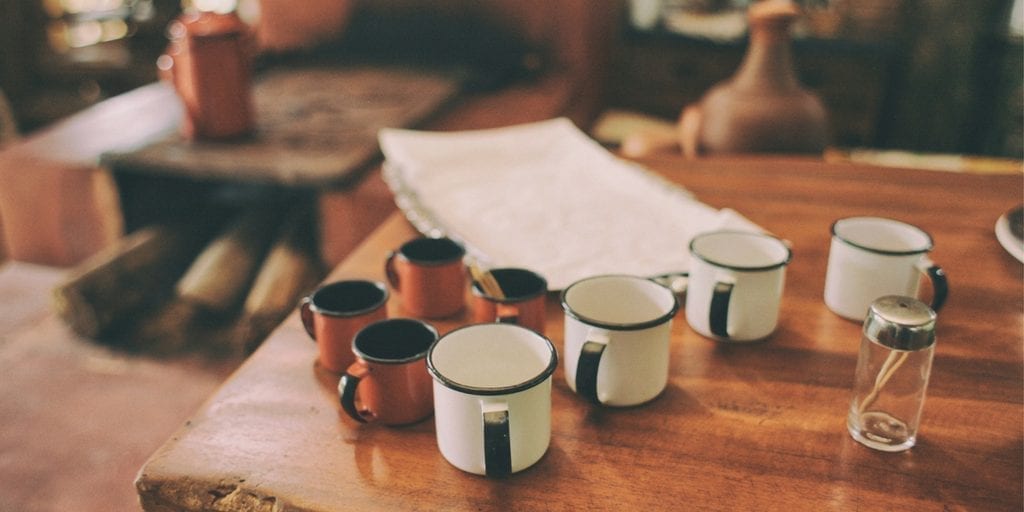 They were led by Steve Beck, and talked about the system and preparing for their children’s financial future, about the SSI and the $2,000 savings caps, and what on earth could be done about any of it.

Steve Beck went ahead and pulled together a plan under the current 529 savings plan, whereby individuals with disabilities and their families could save money to be used for education, medical and dental care, job training, housing, transportation, and other expenses. Contributions to the account would grow tax-free and withdrawals for disability expenses would also be tax-free.

That plan, which is now known as the Stephen Beck Jr., Achieving a Better Life Experience Act of 2014 – better known as the ABLE Act – became a law in 2014, with individual states running their specific ABLE program, which vary per state. You do not need to be a resident of the state in which your ABLE account is.

ABLEnow is one of the fastest-growing ABLE programs in the country, with accounts in all 50 states.  It’s administered by Virginia529, the largest college savings plan in the US (which now has an expanded mission to meet the needs of individuals with disabilities).

What does this mean in real-speak?

It means it’s easy to set up an account with ABLEnow, and it means that since California does not yet have ABLE accounts available, I headed on over to ABLEnow to set up an account (first for my daughter who has Down syndrome, then for my self: being d/Deaf does count as a disability, as I was deaf before the age of 26, I am qualified to open an ABLE account).

Below is a slideshow of screenshots of the entire process. 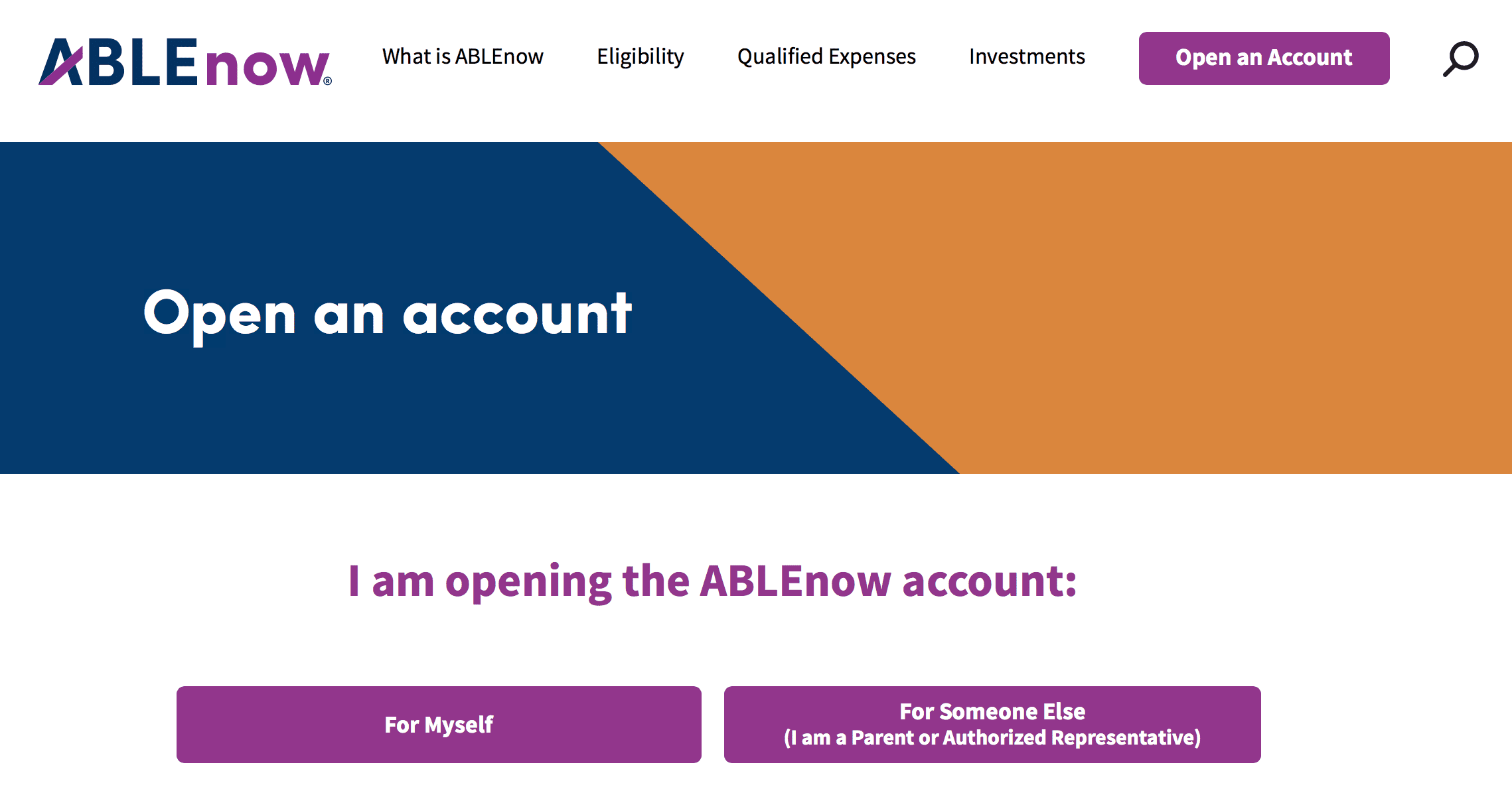 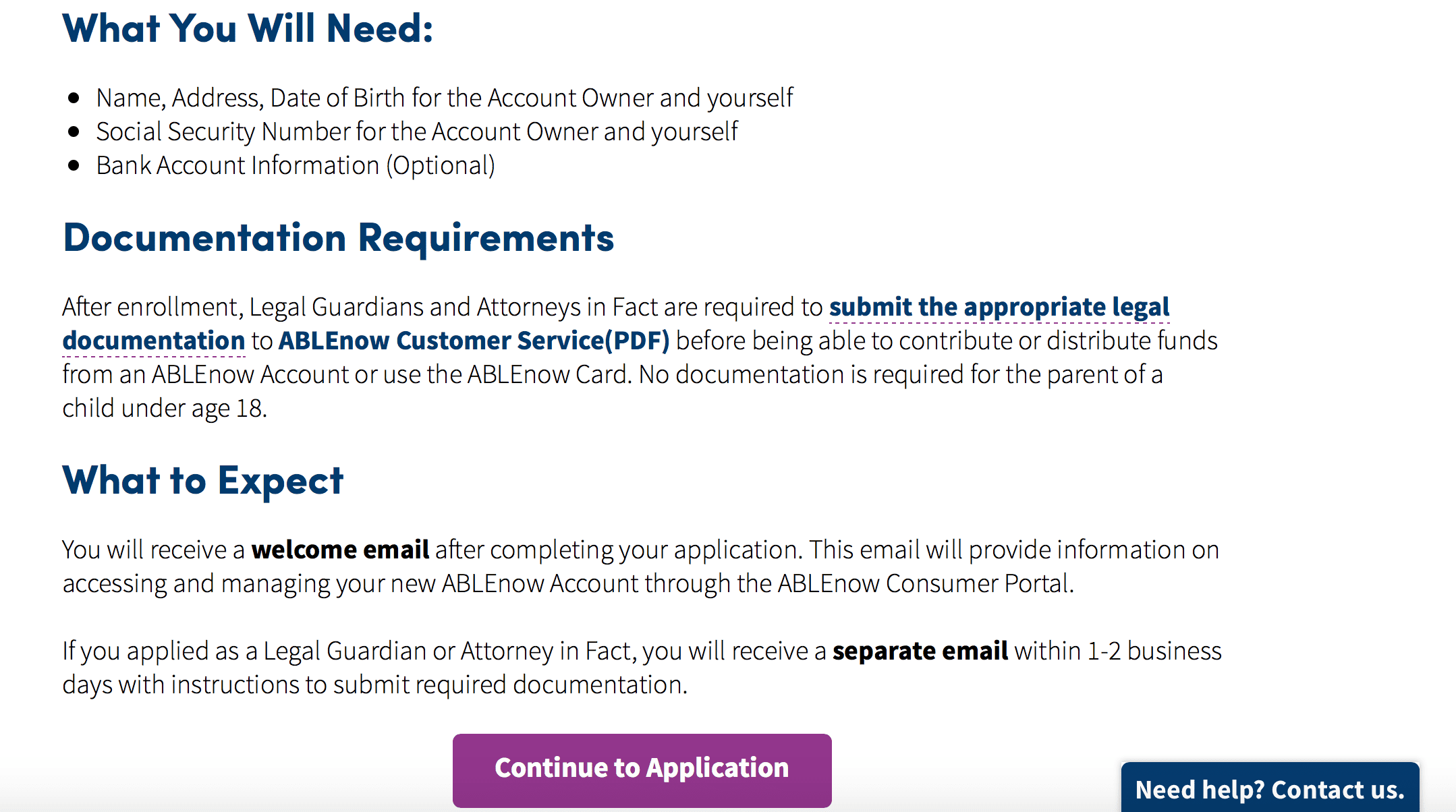 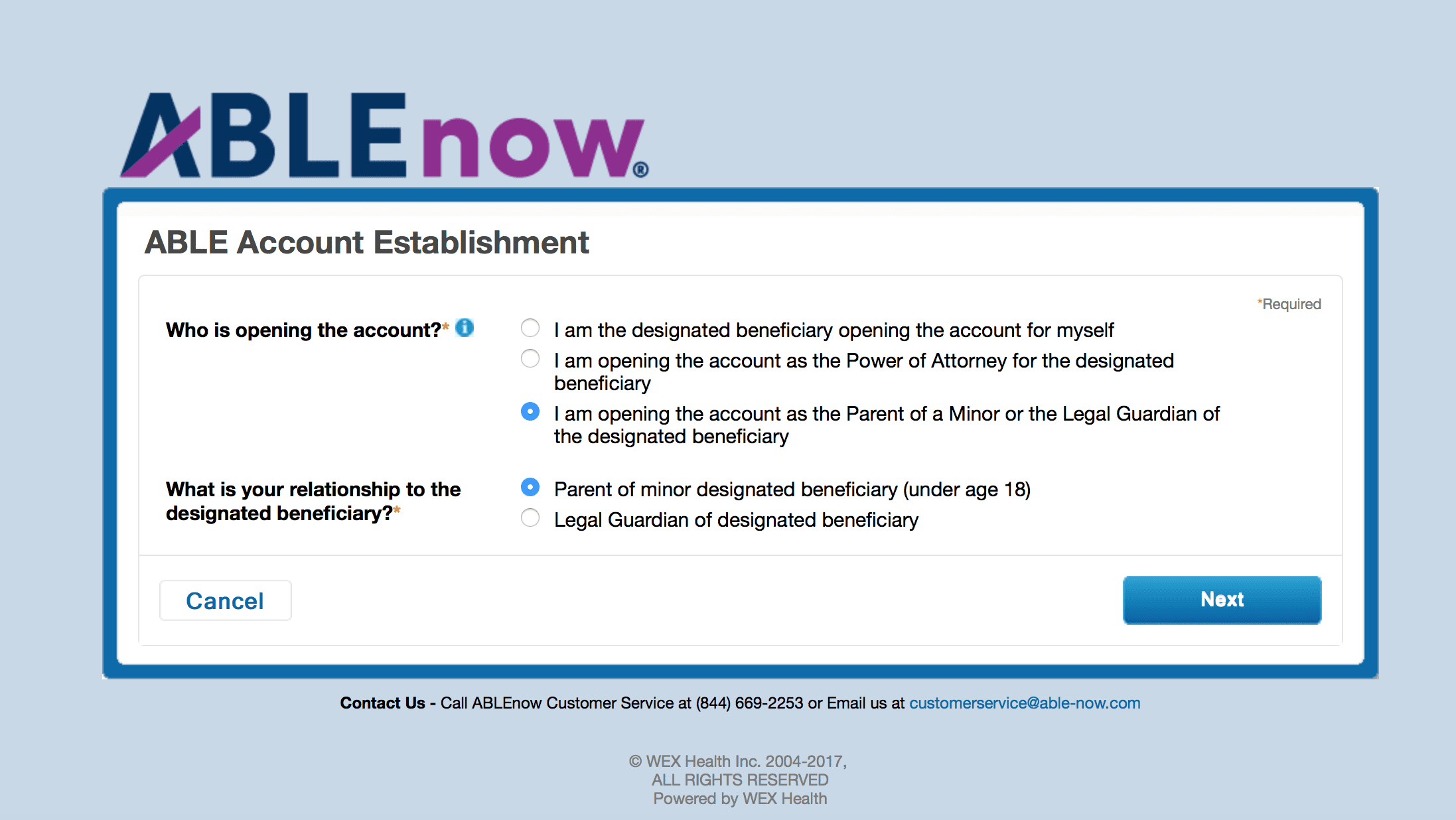 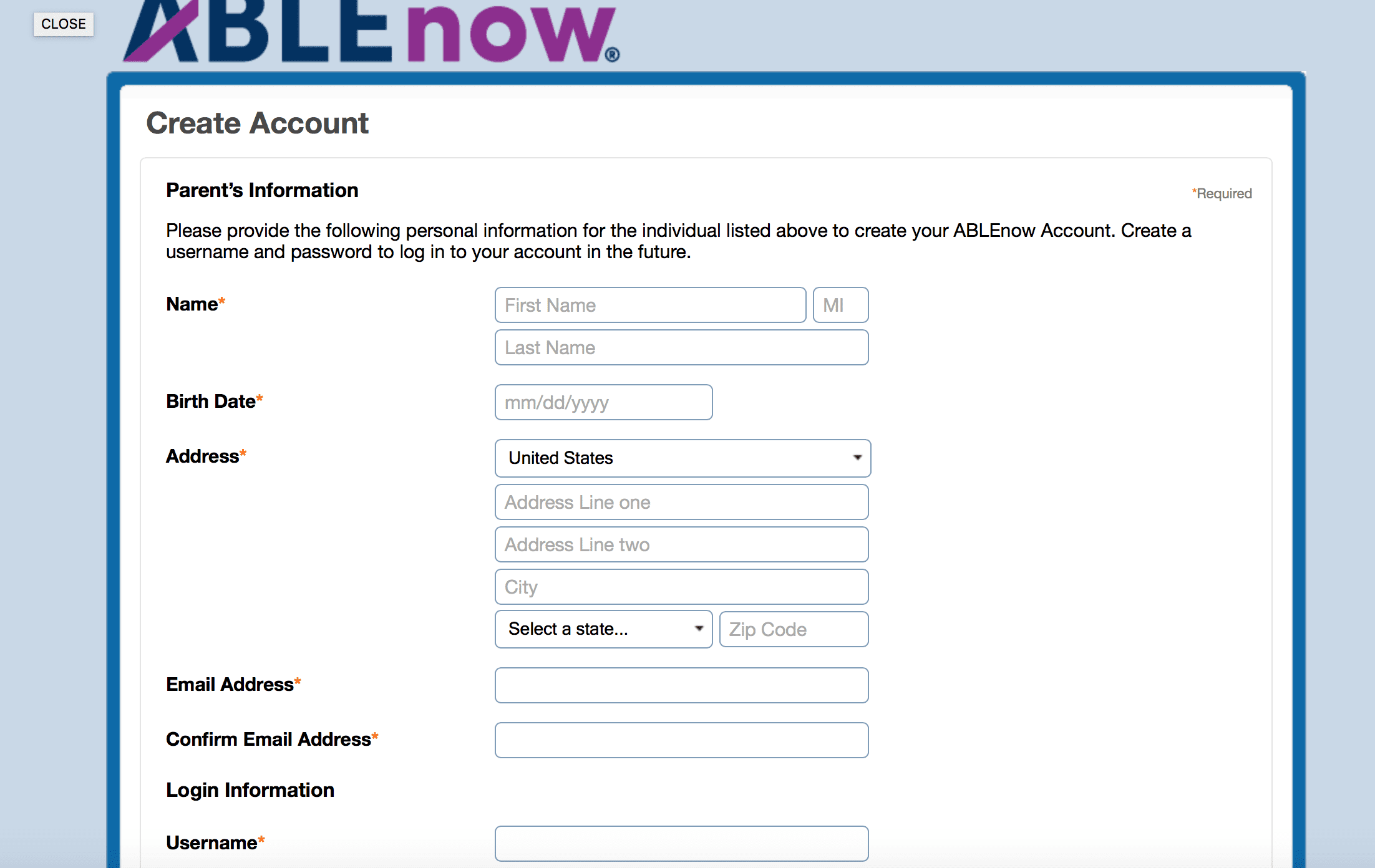 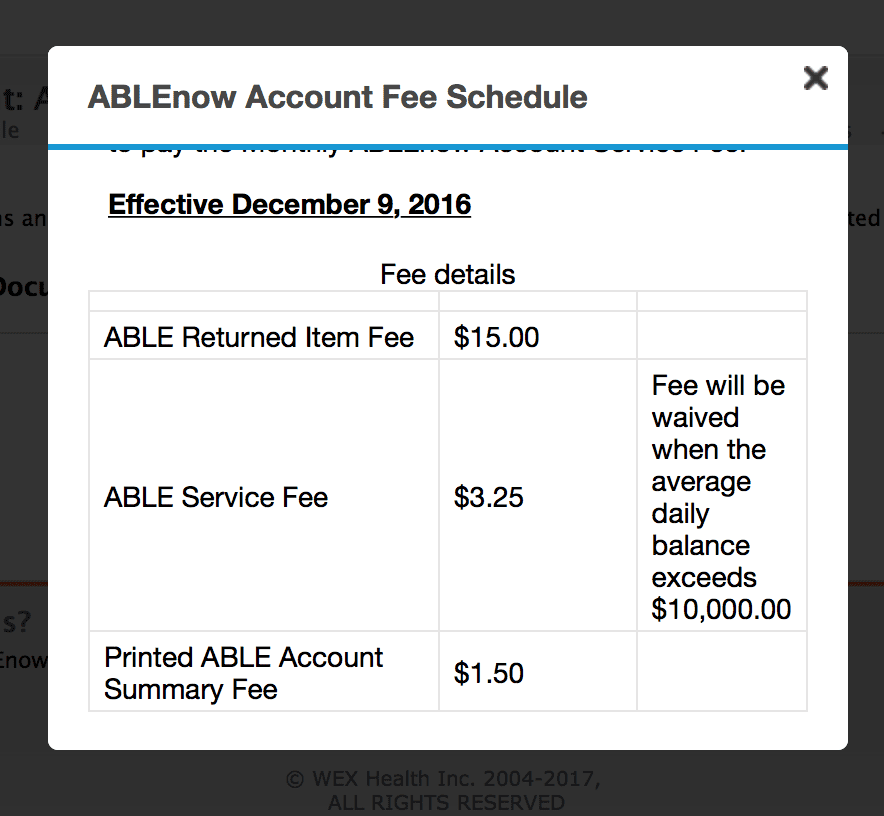 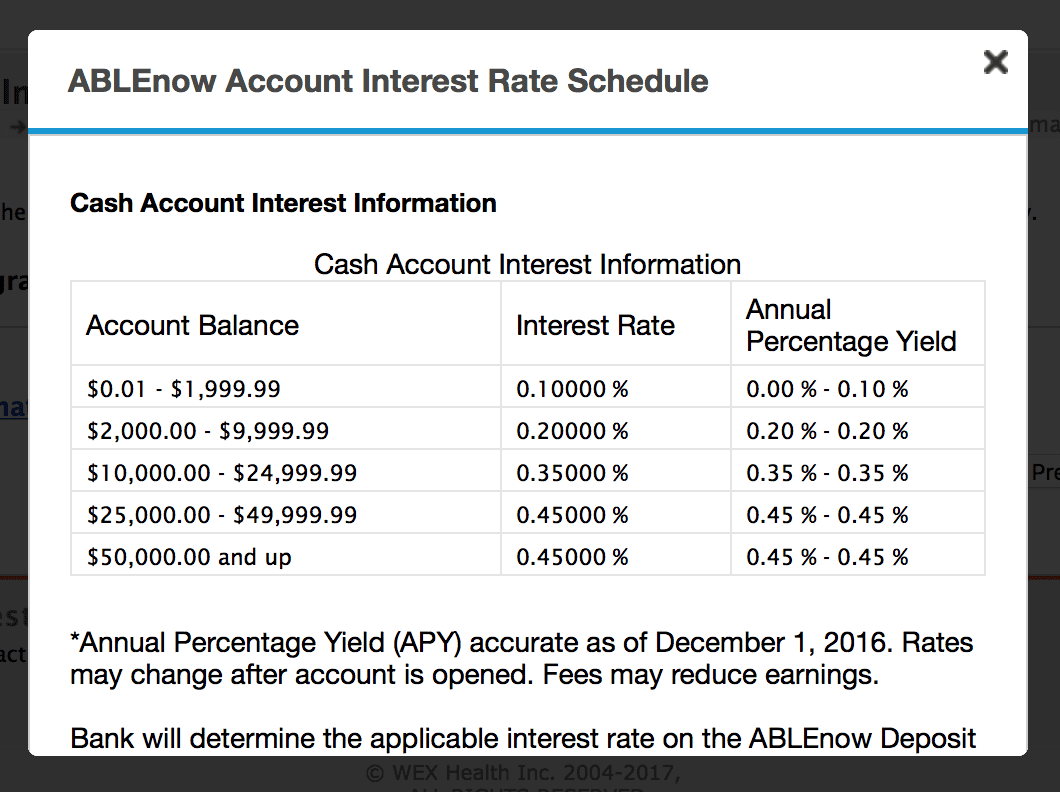 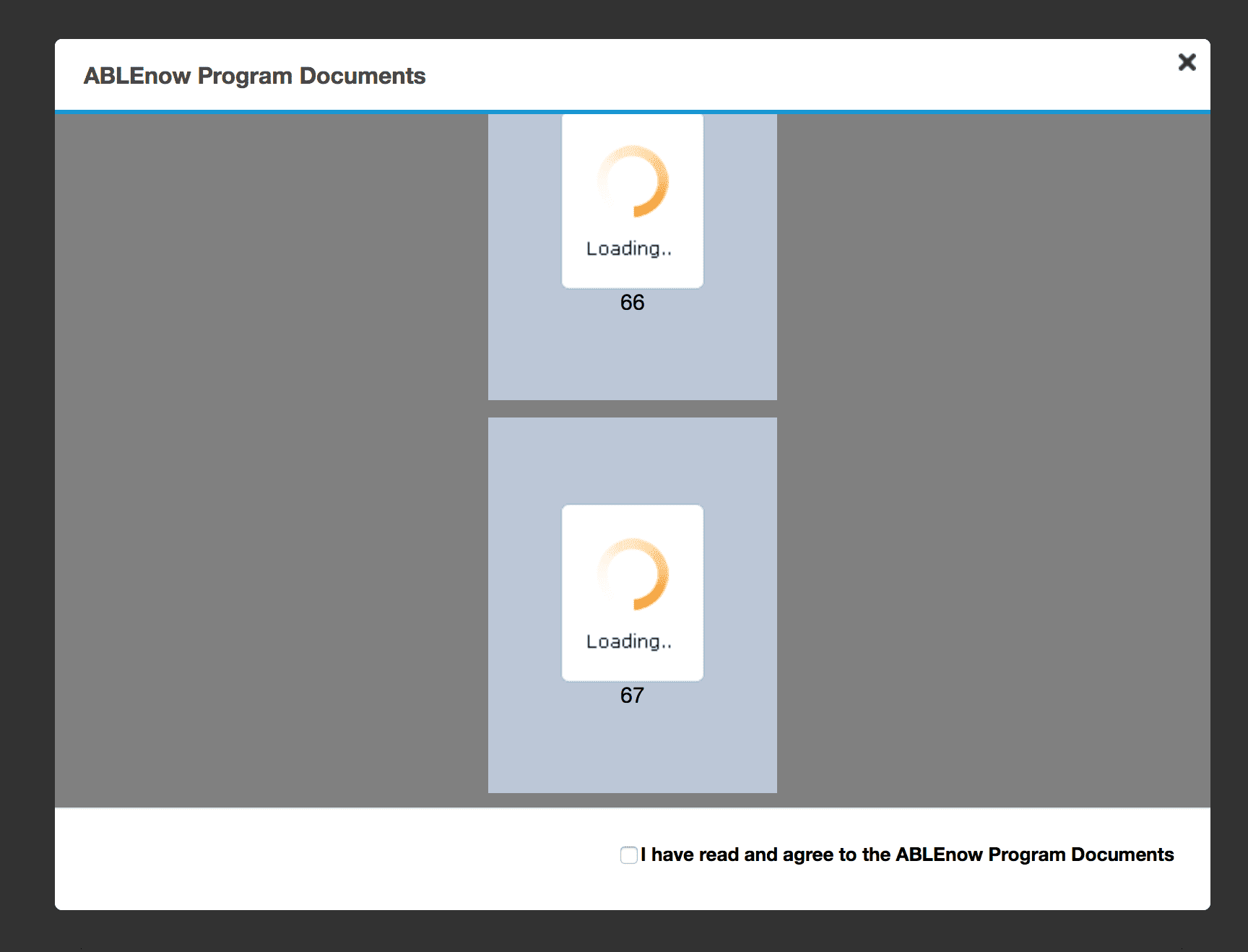 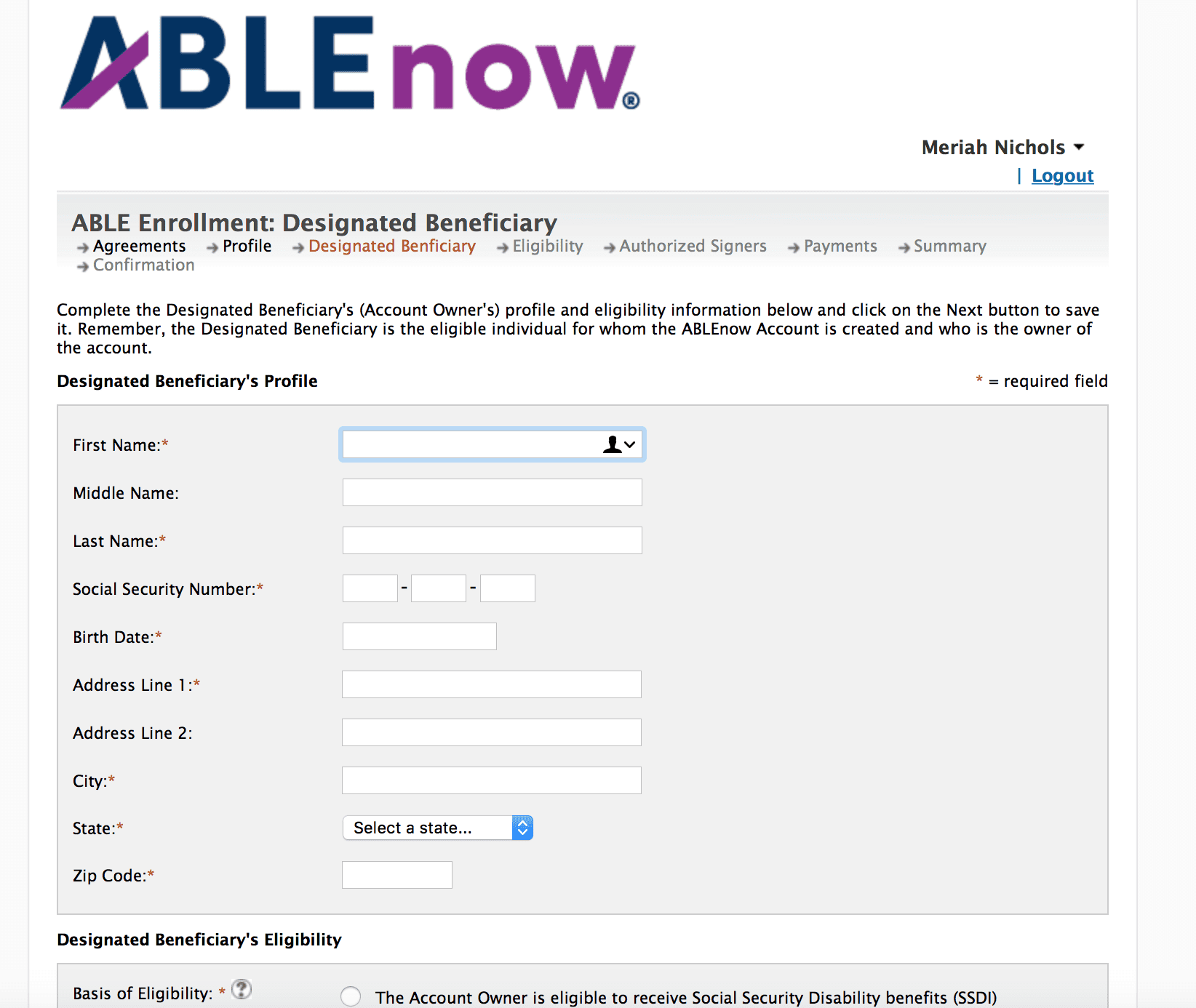 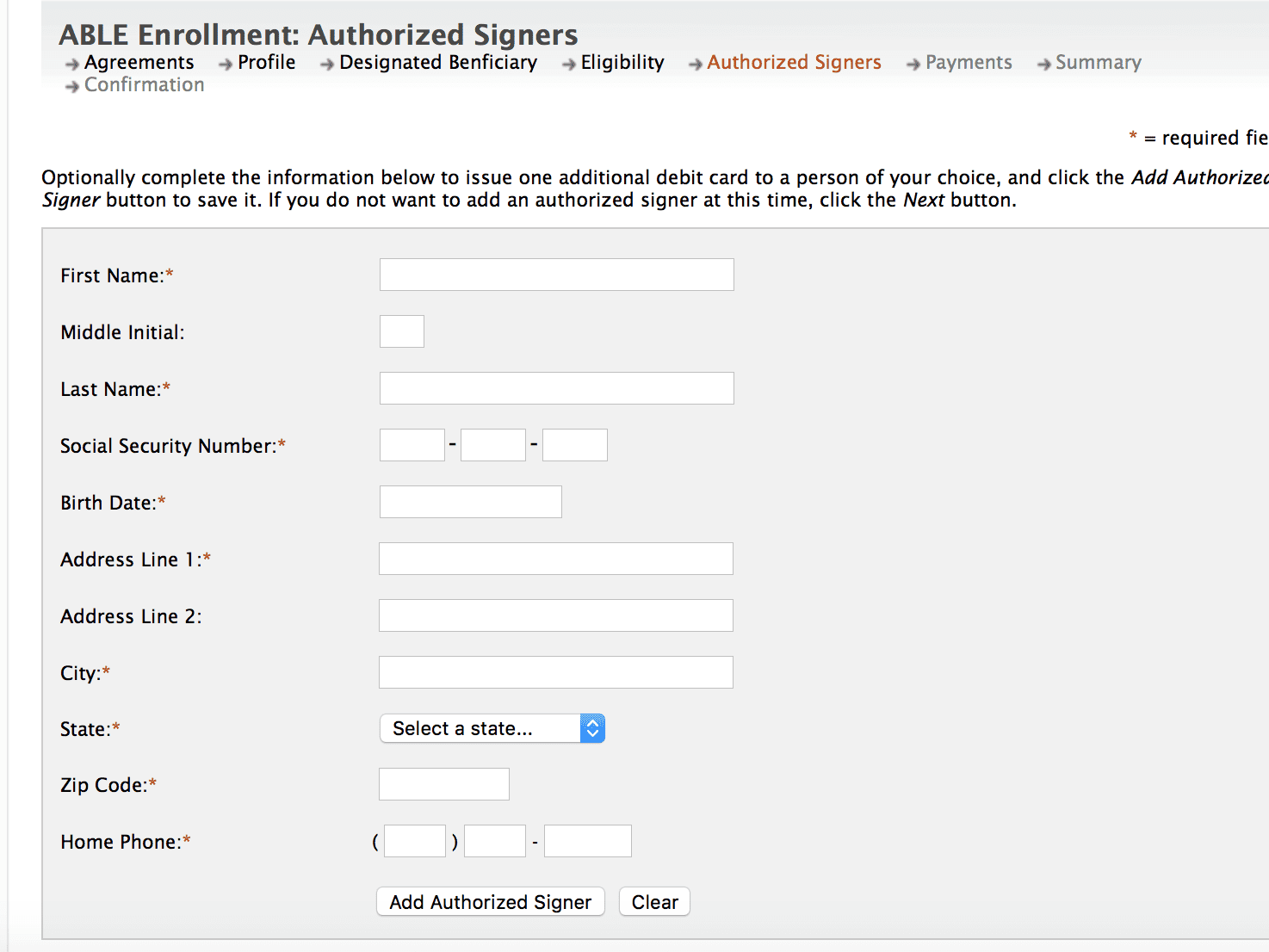 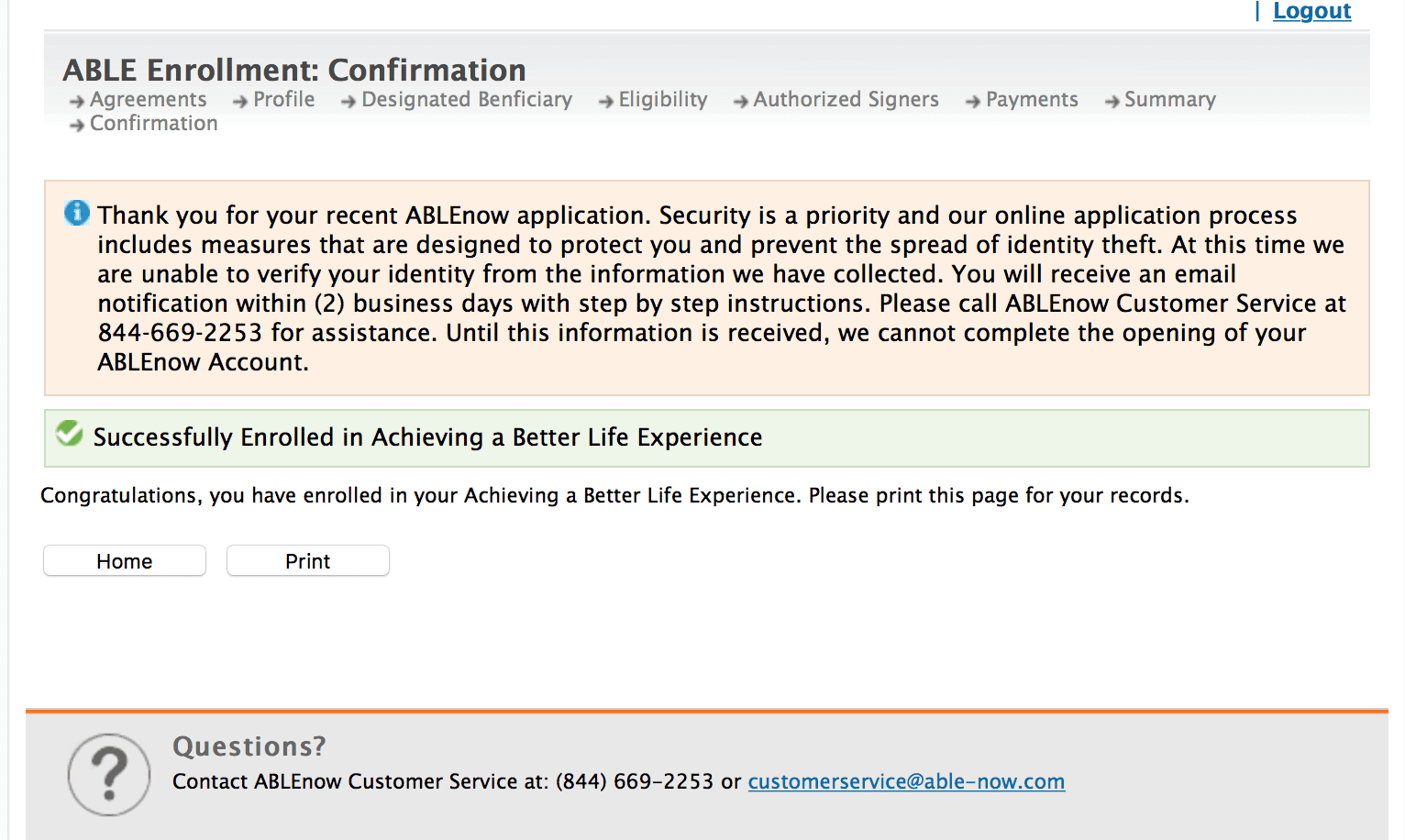 I literally clicked a few times and within 15 minutes (or, while my coffee was still hot), had it set up.

Moxie’s new ABLEnow account comes with a debit card, and it’s linked to my own bank account. This means that I can transfer money over to her account for savings, and I can maintain a regular budget for her disability-related expenses, and use the account debit card to pay for those expenses.

For more information on what counts as an expense, click here.

Like all parents, I care deeply care about my children’s future financial well-being. As a parent of a child with Down syndrome, my care runs even deeper, knowing that the system is not stacked in the favor of my child. As a deaf single mom, that concerns threads through my marrow, knowing firsthand exactly how that can affect my child, and knowing that I am the only one my child can count on to set up an ABLE account for her and plan for her future financial security.

These accounts are real game changers: they make planning, saving and disability-related spending for our kids (or ourselves, if we also have a disability) easy. They help prepare our loved ones (and/or ourselves) for a future that has a little less worry, and a lot more fun.

This is a sponsored post written by me on behalf of ABLEnow. I wrote this post because I believe this is a fantastic avenue through which we can save money for ourselves (if we have a disability) or our kids (with disabilities).

Thank you for this detailed information! I am helping my 34 yr old son (he was approved for SSI and Medicaid benefits in June). My question is: Can his Medicaid benefits (his only source of medical insurance) be discontinued with funds being deposited into an ABLEnow account or does Medicaid strictly look for the account balance in his bank account? Our journey has been a complex one and it will continue to be that way in the future. Thank you

Hi Elizabeth, First of all, I wanted you to take a look at this post too on ABLE accounts, because I just recently switched our accounts from ABLEnow to another (better) ABLE account. This post has info on how to research the various accounts: https://www.meriahnichols.com/why-i-switched-from-my-able-now-account/

Definitely visit the resource center (that's linked in that post) for all the professional free help they offer.

In a nutshell though, NO, funds that are in your ABLE account are NOT counted against Medicaid or SSI benefits. That's the beauty of the program, the reason why it was set up. It's a way to save beyond the $2k and still keep benefits.

Is there a cap on the amount of money that can be saved in this account for the future. Our son is a high functioning individual with autism, he receives no SSI, he works part time and lives at home with us. We are getting close to retirement and would like to begin putting money away for him in the future and he can put money in the Able account too. So, my question is how much money can be accrued in the Able account?

It depends on the state in which the ABLE account is set up - some states have higher limits, others; lower. Check out the National ABLE Resource Center for complete information: http://www.ablenrc.org/

Will SSI see how much money that I have in my ABLE account???

Please email me back at kylienb5@comcast.net

You won't get penalized by having more than 2k in your ABLE account - that's the beauty of the accounts. It's a way to save money LEGALLY even if you have SSI

Hello I’d like to know more about how this works. My child has autism and receives social security disability. I was told that we weren’t allowed to save any money, i am trying to understand exactly how this program that you speak of works. Are you saying that it is possible to save money and not be penalized for it?

that's EXACTLY what I'm saying. This program was designed for exactly your situation. Please visit www.ablenrc.org - the national resources center, for more information and specifics

God Loves Laughter: A Short Story About the Universe Poking Fun at Me

[…] (my car won’t start!), and then another call to Fidelity (I’m wondering about their ABLE accounts) – and then made a note to write a post about how I can make phone calls now, thanks to […]