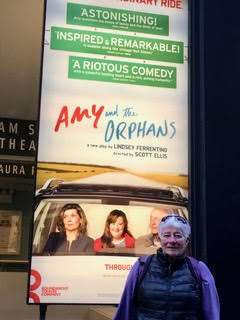 Linda and Amy and the Orphans Billboard

I’m not a big fan of cities, including “The Big Apple,” but when I read the reviews for the Off-Broadway show, Amy and the Orphans, produced by the Roundabout Theater Company, I knew this was something I had to see.  And so on Friday, April 20th, my wife Sue and I boarded a plane in Seattle and flew across the country. We had tickets for the Saturday evening performance, one day before the closing show.

Written by Lindsey Ferrentino, the play tells the story of three siblings in their mid to late fifties who reunite after the death of their father and last living parent – hence they are now “orphans.” What made the story so compelling to me is that one of the siblings, Amy, was born with Down syndrome. Her role is played by actress Jamie Brewer, who makes history by becoming the first person with Down syndrome to appear in a Broadway show.  And given her performance, I know others will follow.

Playwright Ferrentino grew up with a real-life Aunt Amy, a woman she remembers as “loud and funny, someone who loved movies, Michael Jackson and calling people ‘meatball.’” But contact with her aunt was limited since when Amy’s parents were told their baby, and third child,  was a “Mongoloid idiot” they followed the doctor’s advice and placed her in an institution. This occurred in the early 70s . When her aunt died in 2014, Ferrentino was left wondering about her family’s relationship with Amy – a relationship colored by her grandparents’ life-long guilt and pain regarding the decision they made so long ago.

Those of you who follow my blog will understand why I titled this entry “Art Imitates Life – Or Not.” Like the child born to Ferrentino’s grandparents, my son Steve was labeled a “Mongoloid idiot” by our pediatrician.  I corrected him on his use of this inappropriate term.  As a teenager, Steve worshiped Michael Jackson and could lay down a mean moonwalk. He also loved movies, especially sci-fi classics and horror flicks and assigned the nickname  “Meatball” to one of his teachers. How uncanny! But unlike the real-life Amy, Steve was raised at home with his two younger brothers who not only taught him much but also learned from Steve.  In Roundabout’s Upstage Guide, the section titled “Family Perspectives of Down syndrome” includes the following quote: “Siblings of children with Down syndrome often display higher levels of maturity, acceptance and social literacy than their peers.” Given the men that Steve’s brothers are today, I wholeheartedly agree. 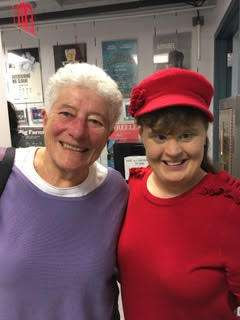 When Lindsey Ferrentino decided to write a play about her family’s relationship with her aunt, she contacted Gail Williamson, an agent who represents actresses and actors who happen to have Down syndrome. Williamson is employed by the talent agency KMR. She is also the founder of Down Syndrome in Arts and Media (DSiAM). It was through Ms. Williamson that Ferrentino met Jamie Brewer.

Steve loved the theater and after each performance he saw, he unfailingly expressed a desire to go backstage and meet the actors. Once we had booked tickets for Any and the Orphans I wrote a letter to Ms. Brewer telling her that I would be in the audience on Saturday evening. In the letter, I also told her a bit about Steve and said I hoped to be able to meet her after the performance but would understand if she was too busy. To my delight, I received a text inviting both Sue and me backstage after the show. Somewhere I know Steve was cheering!

Meeting Jamie Brewer, along with several of the other cast members and behind-the-scenes folks, was both a thrill and instructive. In her mid-thirties, Ms. Brewer is an articulate spokesperson and advocate for people with disabilities. She told me that she became involved with the theater in middle school and never looked back. She enjoyed hearing about Steve and some of the similarities he shared with her character Amy. But she was especially excited about the bands I handed out to her and the others I met backstage – a pink rubber bracelet with the words, “What am I – chopped liver?” 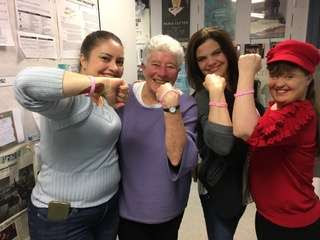 Linda and Cast of Amy and the Orphans

Amy and the Orphans concludes with Ms. Brewer’s character, Amy, standing alone at the front of the stage lit by a single spotlight.  Amy’s monologue uses quotes from some of her favorite movies to review her life and was an emotional highlight for me and many others in the sold-out theater. It was at this point that I understood the significance of the “Chopped Liver” bracelet. Steve’s favorite color was pink. He often recalled quotes from movies and knew just when to use them for the greatest impact.  We called these quotes “Steve-isms” and after his death, I had the bands made in Steve’s honor. I never imagined how much these tokens would connect with the play we saw in NYC two and a half years later.

For now, given its limited engagement March1-April 22, the lights have gone out for Amy and the Orphans. I hope a traveling company will pick up this show and make it available to a wider geographical audience. I would see it again in a heartbeat. Meanwhile, I know this play reached many thousands, not just those in the audience, but everyone connected with the production of the play. I am grateful to the talented Lindsey Ferrentino for her vision and courage in sharing a very personal family story. As for Jamie Brewer? First off, I am going to figure out how to watch her in “American Horror Story,” where she appeared in four seasons of the TV series. Also, in addition to continuing her acting career, she told me she has some other goals on her bucket list. These include obtaining her Bachelor of Fine Arts degree and someday living in her own home. She has the gumption and grit to make these goals become reality.

Meanwhile, I will keep my eyes peeled for the opportunity to purchase a copy of the script of Amy and the Orphans. And I will continue to champion the notion that actresses and actors of ALL abilities deserve to be seen on both the stage and in films.