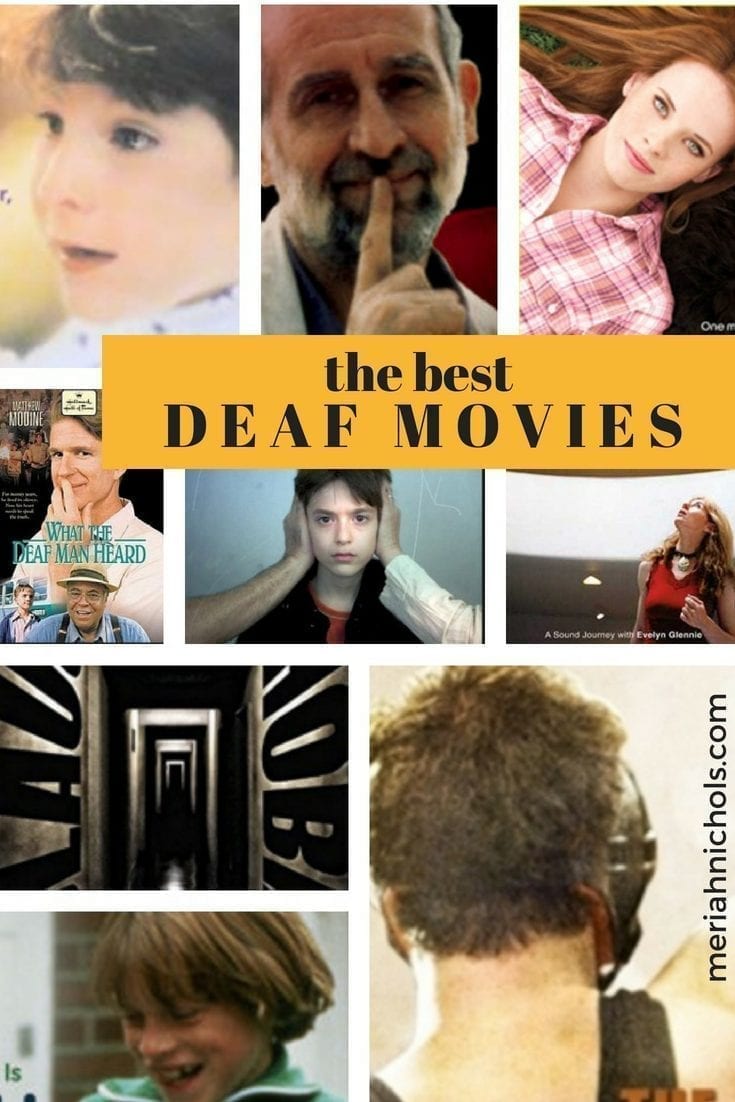 Affiliate links are in this post! That means that if you buy something using a link in my post, I’ll get a percentage of the profit from Amazon (thanks Jeff!), but you pay no more. It’s a great way to support the work I do, so thanks!

This post is a collection (list post) of the best deaf movies – including deaf narrative movies and ASL movies – as well as the best deaf documentaries. I am deaf myself, but this post was compiled by the input from the deaf community on Facebook.

Movie links below are with Amazon. They are available for purchase, but many of them are also available through Amazon Prime Video. If you don’t have Prime membership, get a month trial here: Amazon Prime Free One-Month Trail. There is a student special membership – get the 6 month trial membership (and only $6.49/month after the trial expires, and also an EBT and Medicaid Card Holder’s in which you can get Prime for $5.99/month- find out more by clicking here.

See What I’m Saying (English Subtitled) – This award-winning documentary follows four extraordinary Deaf entertainers – an actor, comic, drummer and a singer – over the course of one year, giving viewers a rare and powerful glimpse into the lives of Deaf artists. New York Times Critics’ Pick.

Sound and Fury – Two families, one deaf and one hearing, make decisions about cochlear implants for their children

Through Deaf Eyes – “Interwoven throughout the film are six short documentaries produced by Deaf media artists and filmmakers. Poignant, sometimes humorous, these commissioned stories bring a personalized sense of Deaf life in America to the film. Through first person accounts and the film as a whole, Through Deaf Eyes tells the story of conflicts, prejudice and affirmation that ultimately reaches the heart of what it means to be human.

Nowness – free movie based online (the link will lead you there) – Christine Sun Kim is a Deaf performance artist working to reclaim the world of sound for herself. Todd Selby is a blind filmmaker.

– In the Land of the Deaf – documentary features hearing-impaired people of all ages and from all walks of life, focusing on the students and teachers in a French school for deaf children and exploring the personal lives of some of the pupils and various adults, including an actor, a sign-language teacher, and an engaged couple.

– Beyond Silence – French CODA story of a young woman’s battle for independence and her deaf parents’ struggle to understand her gift for music.

– Children of a Lesser God – the story of a relationship between a hearing special education teacher and a  deaf woman.

– No Ordinary Hero: The Superdeafy Movie – SuperDeafy must reveal the man behind the cape to find true love and inspire a young deaf boy to believe in himself

– A Quiet Place – terrifyingly suspenseful thriller in which  a family must navigate their lives in silence to avoid mysterious creatures that hunt by sound.

– The Legend of the Mountain Man DVD movie in ASL – The Legend of the Mountain Man, set in picturesque Montana, features a typical, dysfunctional family of five. The father, who has been at odds with his parents for many years, decides to send his three children to his parents’ ranch for the summer. The children unexpectedly encounter a creature, one that has never been seen nor recorded in history books.  American Sign Language, No audio.

– Claustrophobia – a young deaf man lives in the country with his girlfriend and everything in his life seems absolutely perfect until something knocks on his door. Horror movie.

– And Your Name Is Jonah – Jonah is a lonely deaf child who has been misdiagnosed as mentally challenged. Jonah’s mother and father struggle to establish communication from their withdrawn son

– See No Evil, Hear No Evil – Dave is deaf, and Wally is blind. They witness a murder, but it was Dave who was looking at her, and Wally who was listening..

– Mr. Holland’s Opus – “Heartwarming tale about the importance of following your passion”.

Zoom Focus, The End: British Sign Language free film (click the link) Drama: What happens to the Deaf world when deafness is ‘cured’?

Zoom Focus, Reverberation : British Sign Language free film (click the link) In 2167, the Government wipes out deafness. A young Deaf time traveller travels to 2018 to try to change the future.

– Listen to Your Heart – A struggling NYC songwriter becomes enamored with a wealthy hearing-impaired girl from Connecticut who tragically cannot hear the music she inspires him to write. After falling in love against the wishes of her controlling mother, Ariana becomes torn between hanging onto the shelter her controlling mother provides and fighting for a love that, if given the chance, might just change her life.

– The Family Stone – an uptight, annoying girlfriend is introduced to her boyfriend’s family. Her boyfriend has a deaf brother and the family knows ASL. The deaf/hearing piece is the most interesting part of this holiday movie!

– A Silent Voice: The Movie (Region A Blu-ray) (Japanese Language 日本語. Cantonese 粵語配音 Dubbed / English & Chinese Subtitled) Japanese Animation aka Koe no Katachi / 聲の形 / 聲之形 – Shoya Ishida, who is afraid of being bored, is curious about Shoko Nishimiya, a hard of hearing transfer student in his class. Later Shoya leads the class in bullying Shoko as she brings troubles to the class. Eventually, when the class is forced to take responsibility for bullying Shoko, the class turns to bullying Shoya to shift the blame. Until years later, when Shoya, tormented over his past, decides he must see Shoko once more?

ASL Films: a wide variety of films in ASL, free and not. Check it out by clicking the link.

– What the Deaf Man Heard – In response to childhood trauma, a man pretends not to hear or speak for twenty years while living in a small town.  He eventually needs to tell the truth in order to save people he loves.

– Love Is Never Silent – a classic CODA (child of a deaf adult), about deaf parents and their hearing daughter and her life with them.

– Mourning (Soog) (English Subtitled) – A deaf couple keeps a tragic secret from their nephew, debating the child’s future in a language not as private as they believe, whilst on a road trip home to Tehran.

– Bridge To Silence – After her husband is killed in a car accident, Peg, who is deaf, has a nervous breakdown. Her mother assumes custody of Peg’s daughter Lisa but after Peg recovers, Peg’s mother refuses to let her daughter take back custody,

– The Hammer – A coming of age drama following the life of Matt Hamill, the first deaf wrestler to win a National Collegiate.

TV Shows with a Deaf Character or Deaf Person

There are a hell of a lot of good movies that relate to us deaf in some way. There is also a hell of a lot of appropriation out there, with hearing people acting in ASL-driven roles. This frankly really gets my goat; I can’t stand it.

Some of those types of movies are included in this post. I thought they might  provide fodder for discussion.

My best loves here are the ASL ones and the ones that I had an impossible time finding links for – ones made by the super talented people over at the Rochester Institute of the Deaf. Art films or independent movies are my favorites. They can be hard to find. When I do though, better believe I’ll come on back and update this post so that it will REALLY include all the best deaf movies!

In the meantime, I hope you find new content here that will stimulate discussion, provoke thought, make you feel something and do all the great things that great movies do.  I know I have.

Reminder About Amazon Prime & there Ways to Watch the Best Deaf Movies for Free or Cheap:

I just have to write this reminder, because I don’t want money or not being able to afford to buy a movie to come in the way of enjoying great deaf movies.

Library: Check out your local library and if they don’t have the movies, request them. Most libraries will order content that you want, sometimes for $1 and sometimes for free.

Netflix: If you have a Netflix subscription, some of these titles are available via DVD or streaming. I’m currently catching up on the super awesome Switched at Birth that way.

Love and Disability in the Movies: 9 Disabled Love Movies for You!

I'd wondered if THE TRIBE would be on the list, as it really impressed me.

And so do the Zoom Focus two.