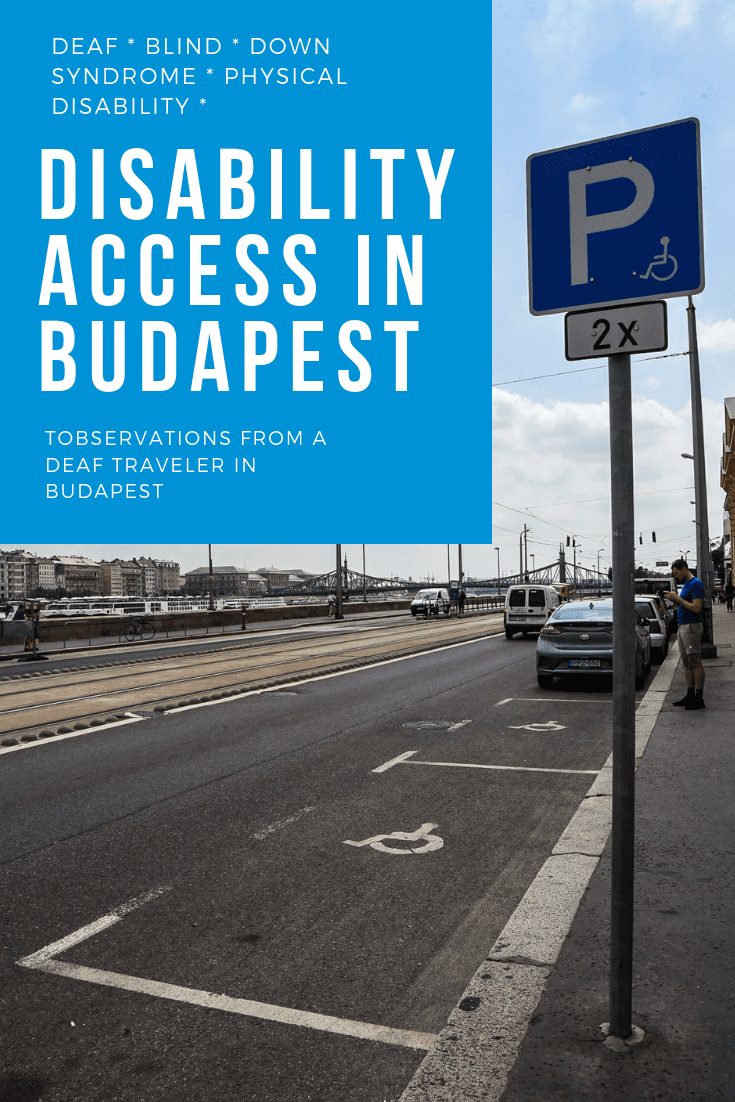 Budapest was a real shock for me after the Netherlands, because one country (- the Netherlands) is the absolute best country I’ve ever seen for every kind of disability access.

Budapest, while not the worst, has a long way to go to become accessible.

I don’t know how someone would be able to use a wheelchair and be able to access Budapest. 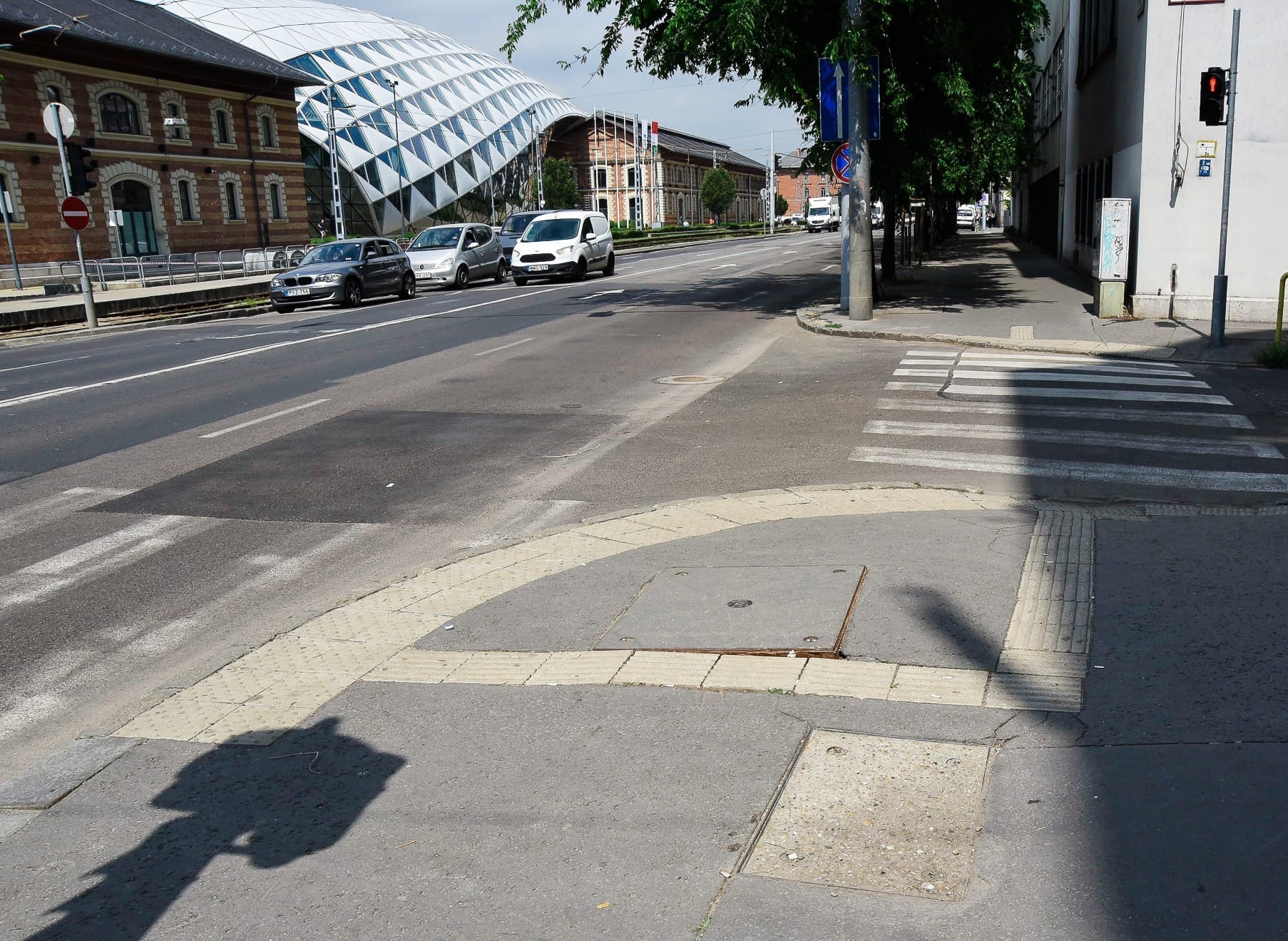 You just don’t know when it’s going to be great or when you’ll hit stairs, super narrow sidewalks (with cars parked on it), flower planters in the way or something. My double BOB stroller -which is the exact size of a wheelchair – was too much for me to navigate after the first day. I gave up and left it at Susie’s Place (the Air B n’ B).

I counted the number of people that I saw using a wheelchair in the week that I was in Budapest. 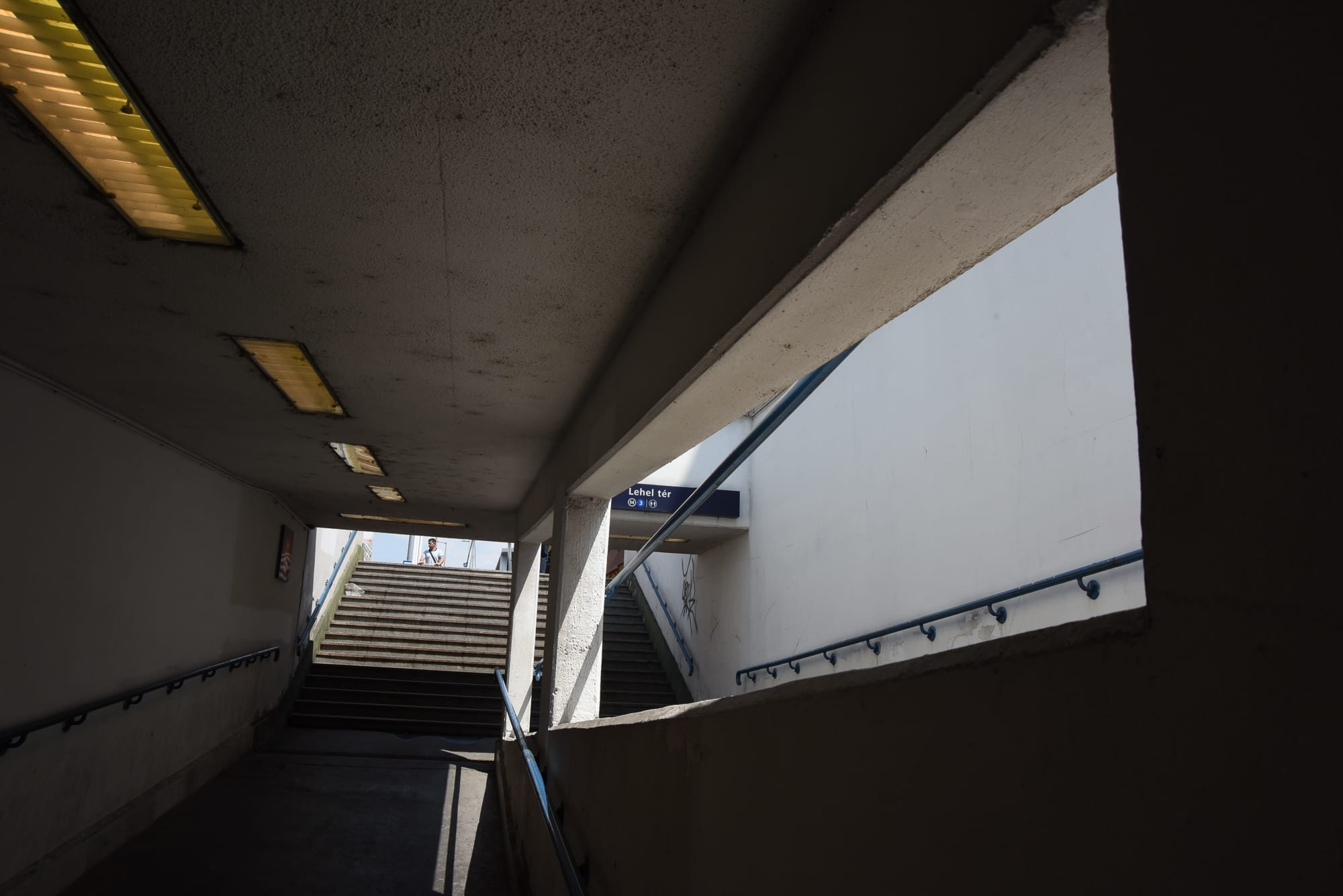 I also saw one woman, whom I will never forget – she was struggling with her crutches to walk a short distance which would have been easy to cover had it been accessible and had she had the right tools.

They say that the Metro line 4 is completely accessible, as is the Tram Line 2 (see the notes below), but – really?!! 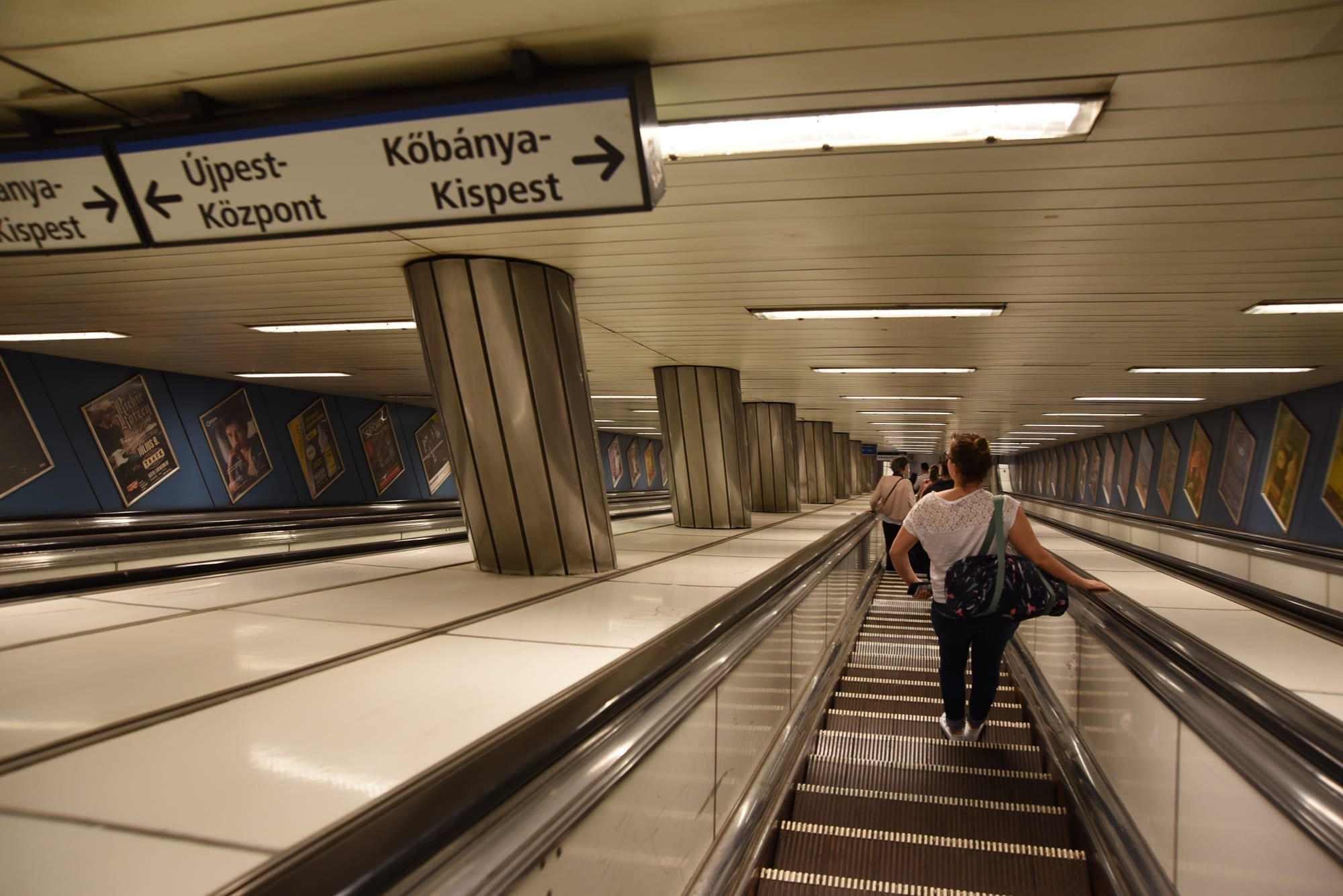 I was always looking for elevators and never once found one that went to the actual train platforms.

Furthermore, the escalators would cause major issues for anyone with balance issues.

Some of the trams were more accessible than others: 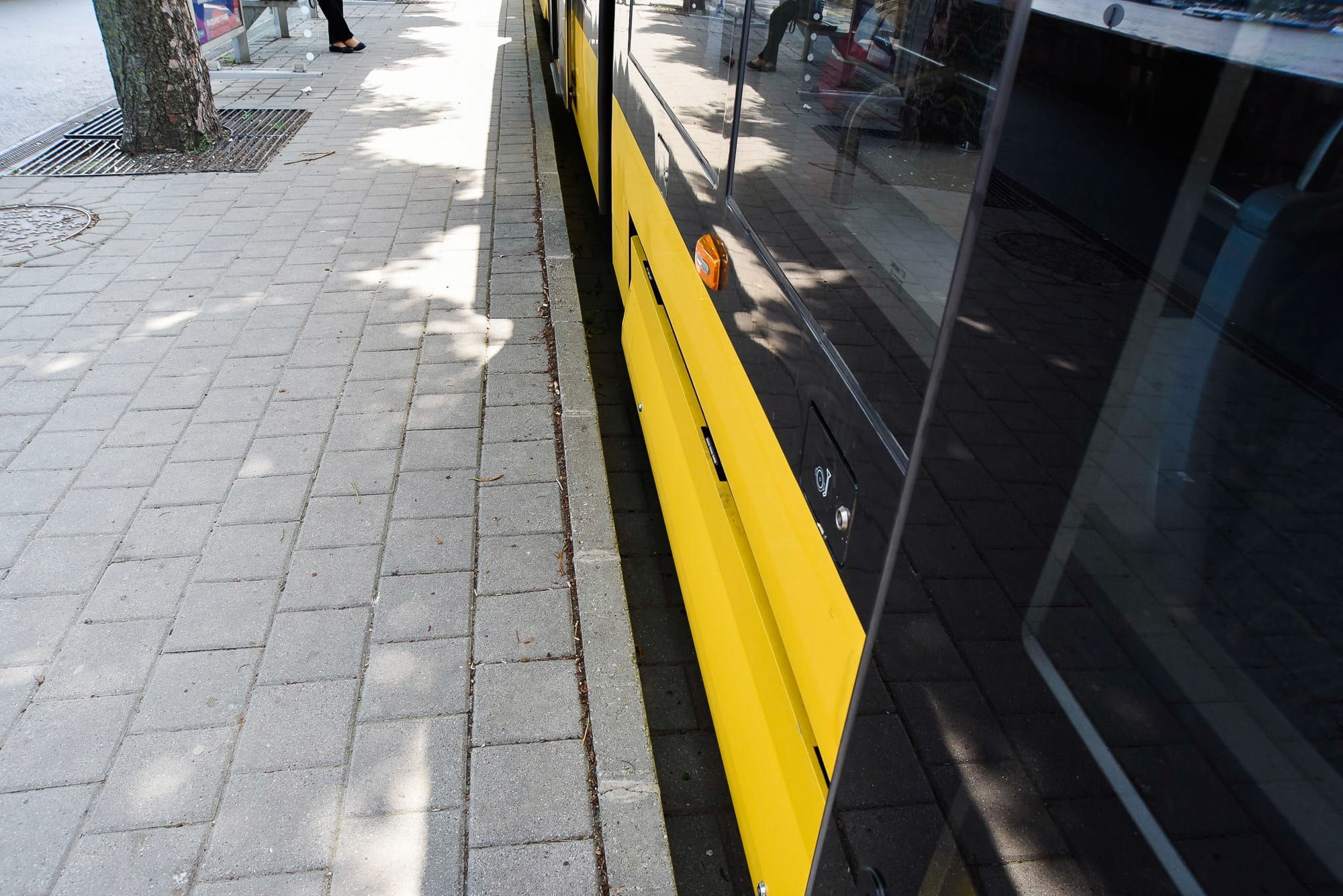 While the door came close to being flush with the platform, I didn’t see any trams that were without stairs.

Maybe there are some cars on the Number 2 line that are specifically marked and don’t have stairs? I’m not an expert on this; I just didn’t see any that were really fully physically accessible, so I kept my stroller (which is the exact size of a wheelchair) at home the entire time.

I was really wondering before I came to Budapest how accessible their famous baths are. 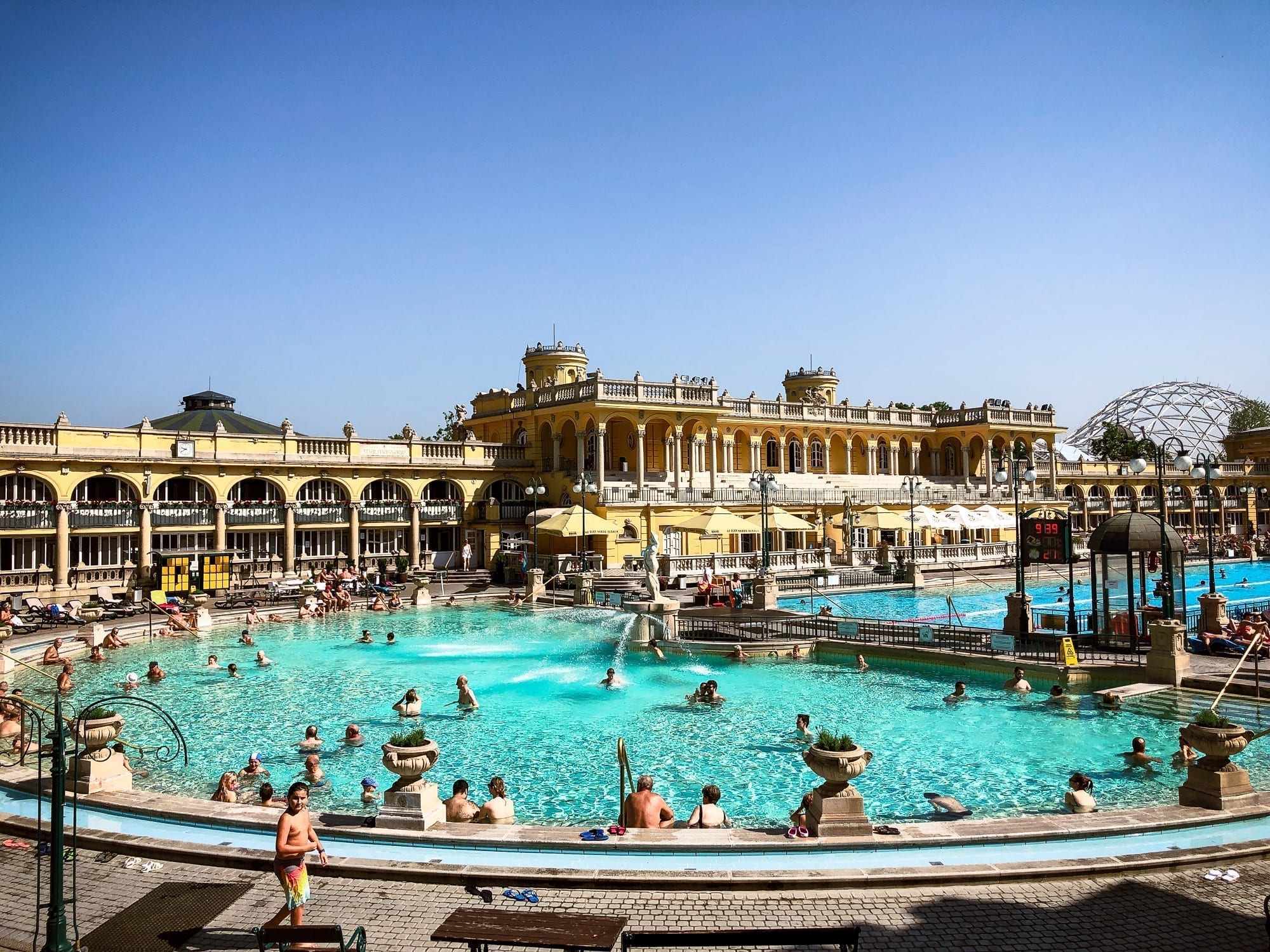 While their signs tout disabled access, I saw no people with physical disabilities in any of them, nor did I see ramps or lifts into the water. None of the lockers were accessible, nor were the toilets, showers, changing rooms (called “cabins”).

I’m willing to wager that “bathing disabled access” in Budapest might mean that an attendant would carry someone with a disability into the water.

There might be another secret to the access (a back entrance? a hidden ramp?), but I don’t know what it is.

Budapest for the Deaf

I think Budapest is pretty accessible for us d/Deaf.

All of the trams and trains have visual displays for the stops, clearly reading what is coming next and so forth. Maps are everywhere, not many people speak English anyway, so it’s pretty easy to figure out what is going on through our Deaf Skillz. 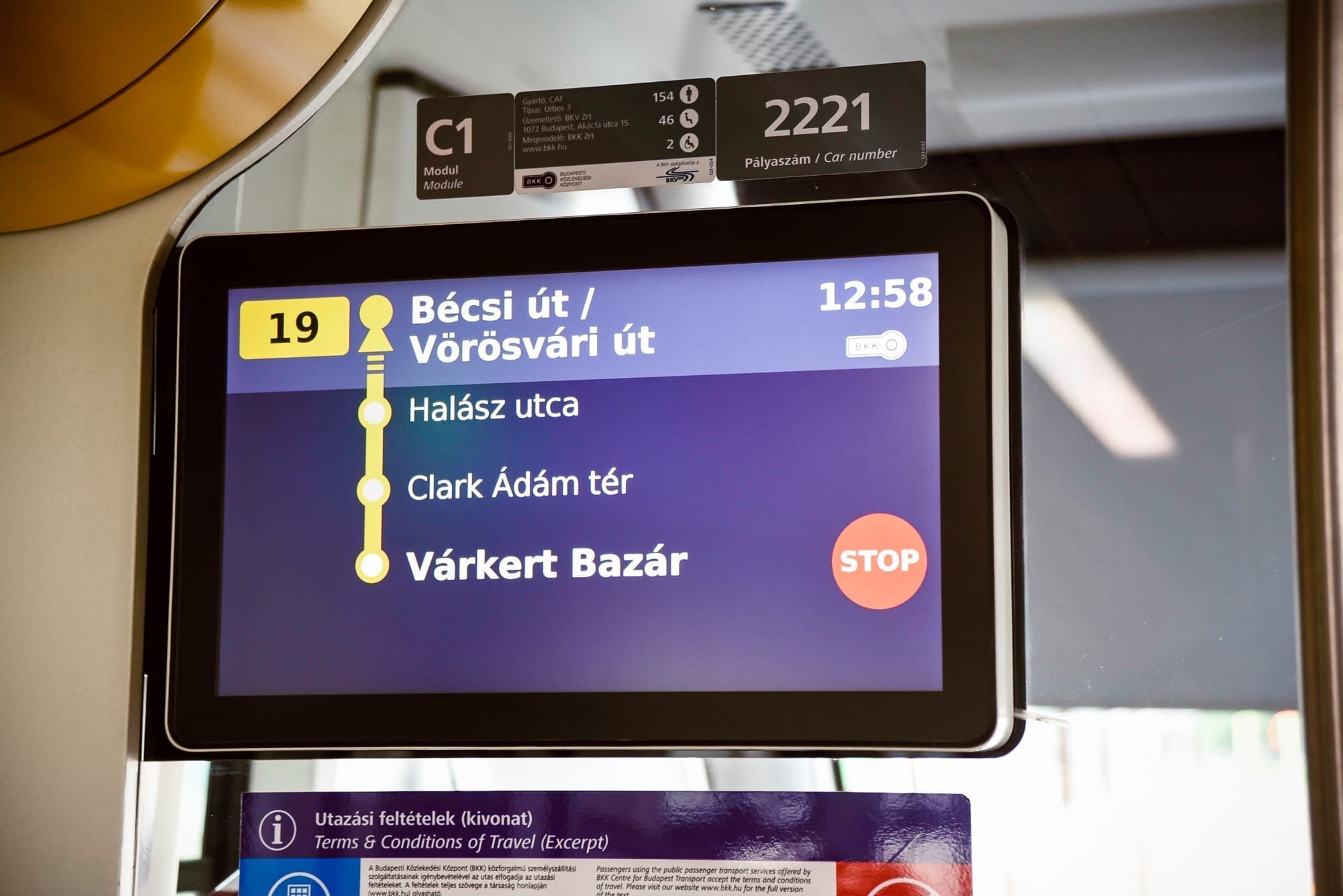 I did not go to the famous Ruin Bars (or any bars for that matter). I was just a mom traveling with her little kids. I don’t know how the nightlife would be for us d/Deaf in Budapest; I simply assume it would be just as easy to navigate as it is at home when it’s loud and no one else can hear and we are at an advantage!

In terms of signed language, like I wrote, I met a Deaf couple in Budapest and had a very enjoyable conversation with them. The woman was quite fluent in ASL; the man only signed a Hungarian sign language.

Apparently, there was a long history of sign language suppression in Hungary because the Communists feared that signed language would be used by spies, and/or would promote political/social unrest. Signed language was forbidden for years. The result was that a multitude Deaf communities and languages emerged in Hungary, one for each institution/community.

The woman that I spoke with said that many Hungarians know ASL. This makes sense – if Hungarian signed language was suppressed for decades, then ASL would be an easy back up.

I also met a deaf woman working as a cashier at a supermarket checkout stand.

She was like me – with powerful hearing aids and neck loop and speaking. She also used signed language and we had a nice short chat. I thought that the fact that she was hired as a cashier was a positive for the employment of deaf people, but of course, I’m sure the fact that she speaks has something to do with it. I wonder what the employment levels are like for people who sign only, and/or for people who don’t speak?

Budapest for the Blind

I saw quite a few people out and about using their white canes in Budapest.

I thought that Budapest seemed just as accessible for the blind as it was for us deaf. All of the visual displays, my kids told me, were being announced.

The only problem then would be in being able to understand what was being announced. Something that we would read as one thing would be quite different with the correct accent!

The design in the city was not, I thought, very blind-friendly.

There were ATMs and machines tucked into walls which would make it pretty impossible for a blind user to tell it was there. I saw a lot of sudden swerves, dips and bi-passes on sidewalks without safety barriers – I think that would be really scary for a blind traveler.

It reminded me of a fantastic talk I attended years ago in which a Ukrainian man detailed all of the access barriers they faced in the Ukraine, and what they were trying to change. Budapest reminded me a lot of that talk.

Budapest for People with Down Syndrome

I was searching for people with Down syndrome to connect with in Budapest.

I actually saw an adult woman with Down syndrome on the metro with what seemed to be her mother. I actually followed her for a while, until it became clear that she wanted to smile at my daughter Moxie, but had no interest in talking with me or interacting with any of us.

Then while playing at a park, we met the most wonderful family with a child with Down syndrome!

My daughter and their daughter became fast friends and we enjoyed time with the family, even going to their home for a delicious Hungarian meal.

The parents said that the education system is still a challenge. Their daughter attends a private English-speaking school (so she speaks English!). Children with Down syndrome are always segregated in Hungary, never included in general education. The family that I spoke to are not sure how they will continue in the future. They are just doing what they can, trying, and helping their daughter live her best life and fulfill her potential.

Disability access and inclusion has a long way to go in Budapest.

While the Deaf access in Budapest is great in terms of getting around the city, I have no idea how it is with access in education and Budapest is inaccessible enough so that one rarely sees anyone with a physical disability on the street.

The city being so incredibly beautiful, I would love to see that change in the way that their playgrounds have so that they become of a model of access, design and inclusion.

Read More From Others on Disability in Budapest:

How the Disability Community is Developing in Budapest

Accessible Budapest: How to Enjoy the City with Limited Mobility – this article has really specific details which I liked. I did not notice any of the things that it speaks of (– elevators on Metro Line 4?! Where were they? Also, fully accessible Tram Line 2?! Really?! Accessible Szechenyi and Gellert? I did not see any of that), but I’m including this link because I think if you have a disability that affects mobility, it’s useful to have a list of what is SUPPOSED to be accessible so you can ask about it. That’s this list, or this official one from the office of Budapest public transport

Sage Traveling: The European Disabled Travel Experts: cut the chase and connect with these folks. They offer accessible tours, a run-down of accessible hotels and places to stay in Budapest and more.

Deaf Club in Budapest – I found this link just now and I sorely wish I had seen in before visiting Budapest. This looks so great!!

The Invisible Exhibition: an experiential exhibition on being blind (well, “being blind for 15 minutes without any pre-text or context, which is ultimately really unlike a real blind experience”)