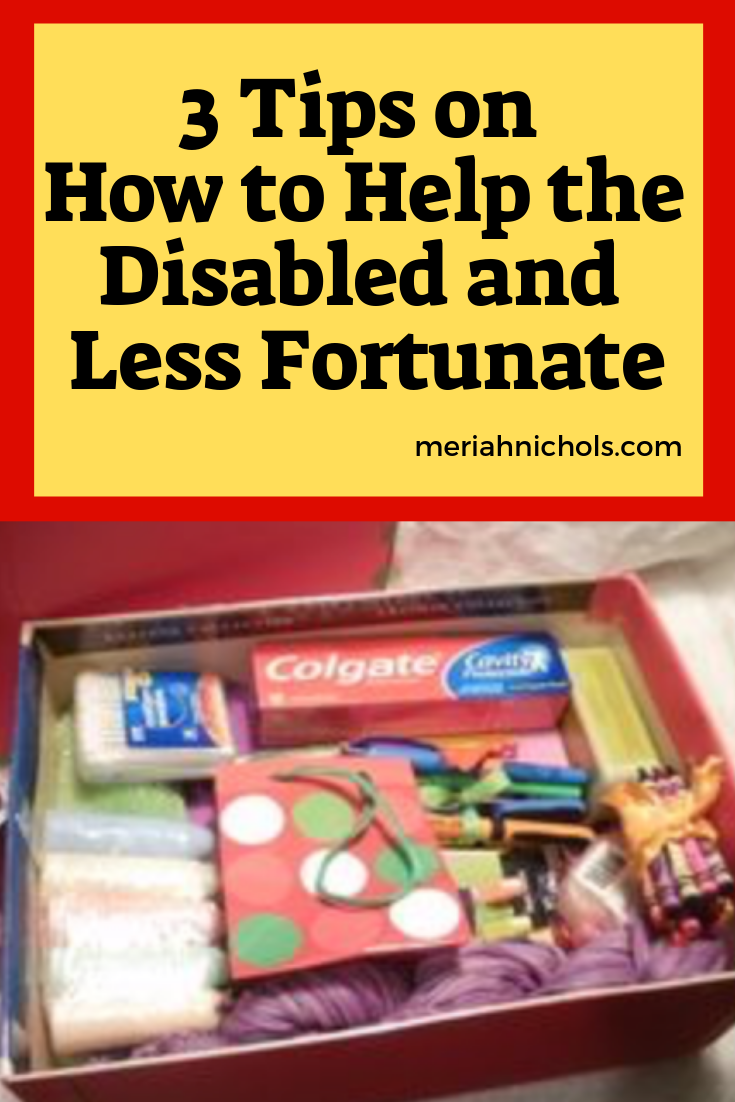 While I was in church a while ago, there was a call for money to help poor people in “3rd world countries,” people who were not so fortunate as to “live the American dream.” This echoed a call in my kid’s school for small things to put into a shoebox and have shipped to a developing country to bring joy and delight to another child for Christmas.

be kind to those less fortunate!

I see the sentiment of being kind to “those less fortunate” all over the place in people’s good works with disability, helping out with kids with “special needs” and making the suffering that people supposes happens in our lives a little less. Just like they want to be charitable towards those in developing countries, they want to be charitable to people with disabilities.

This is the thing: I grew up in a developing country.

And I have disabilities, and my daughter has Down syndrome – a disability that is widely pitied and maybe even feared. I understand both what it’s like to live in a developing country, and what it feels like to be the target of the pity when it’s about disability (or “special needs”).

And I always wind up wondering who is to say what is more or less fortunate about another person’s life? Who can tell who has “it worse”? What is our litmus here?

Is our litmus the possession of a washing machine? The presence of electricity? I’ve lived without both, and it was hard, but I’ll tell you this: it was way easier to wash clothes by hand and use a generator or kerosene than it was to deal with being the death of my brother that came by way of uncontrolled gun use in America.

I promise you, this is utterly incomprehensible to most people in the developing countries. They don’t face this type of senseless violence, and they look at us and wonder why we tolerate it. No, they do not live the “American Dream” – which at  this point involves rampant gun violence, crushing debt, unfair wages, lack of access to health care, unhealthy food, addictions to substances, social media and technology, and extreme isolation and depression.

The first tip I have in helping the disabled or the poor is:

Tip #1: Be Willing to See the Situation Differently

Be willing to see things differently.

Be willing to looking at all perspectives from a different angle, one that might be unfamiliar, uncomfortable. Be willing.

This reminds me of when I was a kid in Fiji and I’d get pitied by some village kids for being white – “kaivalangi”. By their rationale, my skin was pitiable as it burned so easily, I had ugly spots (- freckles) all over, and (gasp!) you could see my veins!

Those who have white skin who are reading this know that white skin can definitely suck. There are levels of care that we have to deal – but you get used to it and it’s not a big deal when you are born with it and grow up with it. It’s just a matter of course that you need to put on your sunscreen or you will suffer burns later.

It is kind of the same with disabilities – you get used to what you have – especially when you are born with it – and it’s just your reality. It’s not a big deal.

The big deal comes when you can’t participate in life, or when people treat you in a particular way because of how they think you are.

My whiteness in Fiji, for example – all of the Hollywood movies with white girls had white girls having sex and being unchaste with their clothes and bodies.  I was expected to want sex or “be easy” when I was 11, 12 years old. “All white girls want it” was something I heard.

People in Fiji consuming American media and not knowing any white people personally,  thought that all white girls were loose, godless, unchaste, nymphomaniacs by what American media was presenting to them.

People treated me in a particular way based on the color of my skin, and that was what made things unpleasant for me, NOT having white skin itself. I was used to the white skin, I knew how to put on sunscreen and take care of it. I did not know how to tell a country that I was the same as them in my values, and that the movies they were watching were not telling MY story.

Disability is no different from white skin

That is, in this analogy, disability is no different from having white skin. People think we want or need things we don’t, based on media. Movies like, “Me Before You” and “Million Dollar Baby,” leave people thinking that us disabled really want to die because our lives are just too miserable to be borne. But we didn’t make those movies and we didn’t tell those stories: the non-disabled did.

Tip #2: Be Unwilling to Judge Another Person’s Life

Let’s go back to the poor people in developing countries and sending those shoeboxes overseas.

We can’t judge the quality of someone else’s life. Ever.

We will never know enough to do it – we can’t know the full story of another person’s life or reality based on what media is presenting or what it seems to us to be. We aren’t living it, and if we aren’t living it, we don’t know it.

From a religious point of view, Jesus didn’t say to pity people. He said to love. And he said to find the good in others, to believe we are all well and as we should be. All of the Prophets of God said the same, in different words.

The reason they said this is because love is empowering. Believing in the strength and the capabilities of us all is is what helps make us strong, because we are all connected with one another.

We all want others to believe in our own strength, capability, resourcefulness and beauty – we want people to see the good in us. I believe that is both the challenge and the gift that we need to grow into: we need to see those qualities in everyone, just as we desire others to see it in us.

Tip #3: The Power of Giving

Believing that someone else is pitiable or that we need to help  by a gift of a shoebox filled with stuff, or feeling sorry for them because they wash their clothes by hand does not empower anyone.

It makes the giver feel a little better about themselves because giving is empowering; but those gifts don’t speak to the inherent capabilities, strength and beauty of the person receiving. Furthermore, they don’t speak to the culture of the receiver.

I was recently trying to explain all of this to my oldest child (when he came home with the request for stuff for the shoebox to send to kids in the Philippines).

He’s a smart kid – like, ‘whoah!‘ smart, but it was going over his head. So, I said, “you know, a lot of people feel sorry for us.” He was shocked. “Us? huh? But why?” I said, ‘well, on the face of it, our lives might seem awful. We have disability in our family with both me and Moxie, right? And a lot of people are scared of Down syndrome and not being able to hear. Then Uncle Dana being shot and killed. And Daddy and our divorce. We don’t have family around us. I know we feel rich but we technically don’t have a lot of money. Compared to a lot of people, we are actually poor!” His eyes just about bulged. “But,” I continued, “that’s why it’s so important to not compare ourselves with others, because we might be poor compared to some people, but we are rich compared to others – and those others that we might seem rich compared to probably have something we don’t – like a big family.”

Resist the temptation to pity

I believe that resisting the temptation to try and make someone else’s life pitiable – and our own, by contrast, better – helps us all in the long run. It creates a sense of balance, a belief in the fundamental capability of all people, and I think that enhances what we know to be true: that we are all human beings, connected spiritually and biologically.

Let us help each other through empowerment, not through handouts or shoeboxes.

Let’s make sure kids and adults  in our neighborhoods and towns are fed and safe. Let’s make sure our elders are, too. Let’s keep each other company so that none of us feel the debilitating effects that loneliness can bring. Let’s support the mothers in our community and ensure that all of our kids have a stellar education.

Instead of a shoebox, let’s have service projects. Instead of a handout in Africa, let’s work towards healing racism in America today. Or, build  suitcase clinics that believe in the capability of people and assists them to move forward from self-determined hard places.

Everyone needs a chance to give and to feel the power of the giving. Even “poor” people, even people who others think have nothing to offer or give.

Ask questions about projects, charities, assumptions. Is this led by people with disabilities? Is this answering a stated need? Is this culturally appropriate? Is this going to cause more short term gain, long term pain (- think about plastics from shoebox gifts being in remote, rural areas that have no access to recycling). Ask: is it empowering?

Some charity projects are awesome – Handicap International has many fantastic projects, as does MIUSA. There are other projects that really help with alleviating poverty like Heifer International.

Not all projects have to be long term to be awesome. There are lots of short-term experiences that are worthwhile!

Surfer’s Healing is one example of a fun, short, empowering experience. It’s culturally appropriate, it really helps some people and it provides access where there is none.

2. Be Unwilling to Judge Another Person’s Life

In tandem with this is to try and be friends with people who are of the population that you have an urge to pity.

In my example of growing up white in a non-white country, I had a hard time because people didn’t actually know any white people; they were judging white people based off of what Hollywood was giving them.

3. Remember the Power of Giving