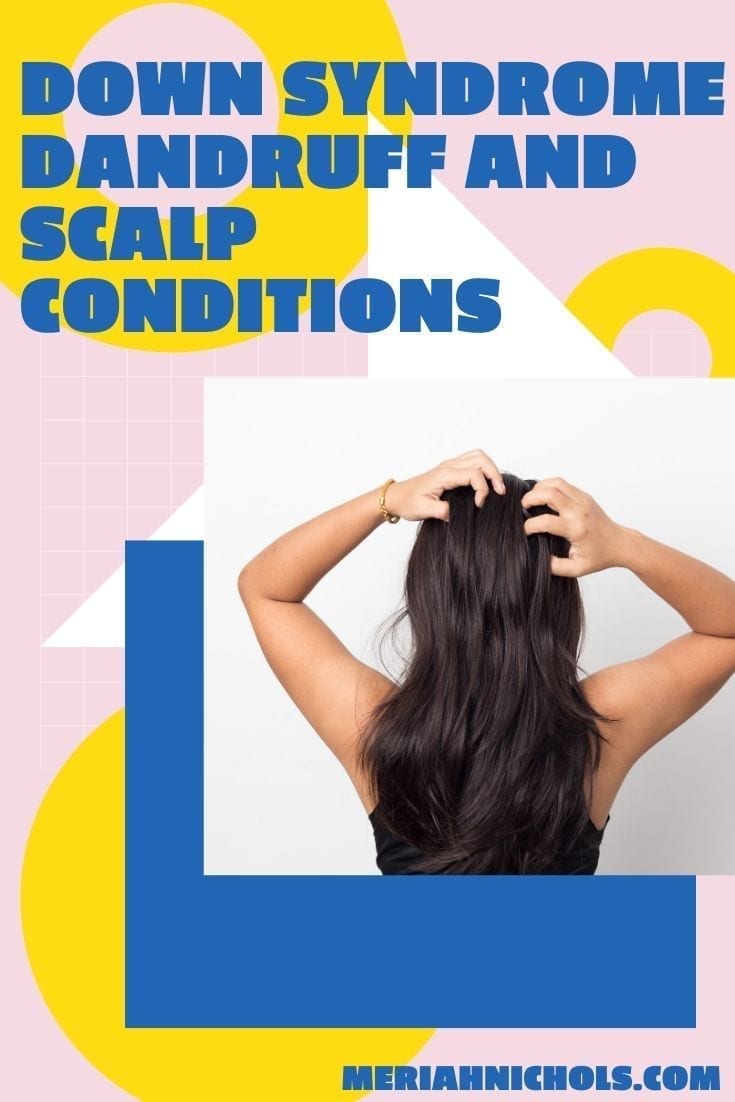 This is about Down syndrome dandruff and scalp conditions – which is to say, the hair and general dandruff that is present in an individual who has Down syndrome!

There is stuff that I think we tend to not talk about in the Down syndrome community.

I don’t think that the ‘why’ of why we don’t talk about it is anything particularly deep or big; I think it’s just that we forget to, or we don’t realize how extremely common whatever it that is occurring with our child actually is (within the Down syndrome community).

I think that dandruff is one of those things.

I don’t think I’ve met a child with Down syndrome that did not deal with dandruff.

“Dandruff” as I’ve seen it in individuals with Down syndrome, ranges from just bad flaky-white-dusting dandruff to full-on huge chunks coming out of the scalp, like, “WHOAH! WHAT IS THIS?!” kind of stuff.

I did a little digging, and see that there are actually a few things going on: dandruff, and Seborrheic Dermatitis (SD). 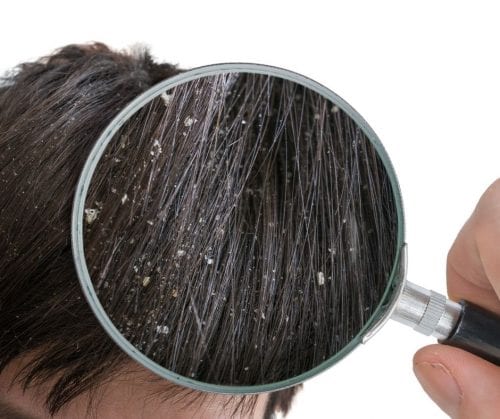 Like I was saying, there are two main bad boys here: dandruff and Seborrheic Dermatitis (which we will call SD, because that’s really long).

Dandruff and SD are pretty much the same thing.

The only differences between them are where they occur and how severe they get.

Dandruff only happens on the scalp and it’s itchy, flaking skin without visible inflammation. SD affects the scalp as well as face, retro-auricular area, and the upper chest. It causes “flaking, scaling, inflammation and pruritus, and can have marked erythema.” (read Seborrheic Dermatitis and Dandruff: A Comprehensive Review for the full scoop).

Our Story with Down Syndrome and Scalp Conditions

My daughter had much more than regular dandruff for most of her time in California.

She had what seemed like cradle cap – that thick, chunky white scalp stuff that babies have. It peeled off in chunks and quite frankly, it really terrified me.

I was always worried that some chunk would be bloody or something; that she’d be hurt from it. But it was never bloody, nor did she ever appear to be in discomfort from it.

She did, however, have a real hatred of water on her head (“hatred” is putting it mildly). She would would scream bloody murder if I tried to tenderly wash her head in any way, shape or form, to the point in which I was glad I was living in a yurt off the grid because if neighbors heard that, I’ll bet CPS would have been called.

Because of how much Moxie hated having her hair washed, I’d usually wait until her hair was a limp, oily mess before I’d venture to brave the Wrath of Moxie.

I used regular Head and Shoulders shampoo. That didn’t get rid of the massive clumps of scalp stuff that would come off, so I cut her hair short, and that helped. I also did any and everything I could think of: coconut oil, Tea Tree Shampoo, Tea Tree essential oil. None of that worked.

I finally tried the Tar T-Gel Shampoo and it dramatically helped.

But while it helped, she was still getting those chunks – just a lot smaller and less frequently.

Moxie’s scalp conditions were most dramatically helped by moving to Hawaii.

Something about the weather here, and most likely swimming in the ocean, really soothed her scalp.

At present, I only wash her hair with T-Gel about once a week, and once or twice a week I wash with regular shampoo. She has no clumps at all anymore, and no dandruff at all either. I use the weekly T-Gel as a preventative, not because she actually appears to need it.

This is the thing: our kids could have psoriasis and not just dandruff or SD (a good article on the difference between dandruff and psoriasis that I found helpful is linked here).
It’s also completely possible for them to have both of something, like scalp Psoriasis and dandruff. That’s where it gets confusing, because sometimes even if we use something that could clear up one condition, it won’t clear up the other, so it all persists.
That’s also why you can hear a million recommendations from other parents in the Down syndrome community on what to do, or what they did to help their child with Down syndrome with dandruff or their scalp conditions, and they could ALL BE RIGHT!
You don’t know what the particular mix of scalp conditions their child has, and the weather in their region (because weather affects it too).

What Helps the Dandruff, Psoriasis and SD?

First it’s useful to know what your child has, exactly. A visit to the dermatologist is the best option if possible.

The dermatologist can prescribe some medicated shampoo or point you in the right direction for whatever will be directly healing for your person.

It’s not always possible to see a dermatologist though! I know when we were living way out in the country, off the grid, it just wasn’t. In that case, experiment with some things that other parents have recommended:

Shampoos made specifically for dandruff and other scalp conditions.

Like I said, we use T-Gel over here in my house with my daughter, and we condition with regular Head & Shoulders conditioner. It really works for us and I think that T-Gel is something of the standard remedy for our kid’s hair and scalps.

Some parents have sung the praises of Selsun Blue; definitely worth trying too!

If you apply these on the scalp, they will help provide some deep moisturizing which can help certain types of scalp conditions.

Some parents use them together (shampoo, then some oil directly on the scalp, massaged in).

Others just use one or the other. But in either combinations, tea tree oil is a powerful healer of scalp conditions.

Apple Cider Vinegar is like Tea Tree Oil in that it’s something of a miracle worker.

It heals just about everything. You can buy ready-made ACV rinses at the drugstore/Walmart/Target, but you can also just make a rinse yourself by diluting straight ACV and rinsing your child’s head with it.

Some parents really believe that changing their kid’s diet will help with their scalp conditions.

Okay! Try it if you are stuck!

Of course this helps tremendously.

If your child’s hair is short, their scalp gets the benefit of the hair oil and sunlight and floating airwaves of good vibes (are you still reading?!).

I’ve never heard of a case in which short hair did NOT help with a scalp condition in a person with Down syndrome, but I also know that my daughter would blow up my house if I cut her hair short. Sometimes it’s just not feasible to cut hair short; so all of the other pieces can be really helpful.

Our kids can definitely have gorgeous hair and healthy scalps!

We just need to keep trying and figure out the right healing combination. We can’t forget to them them, too, about how to care for their scalp and guide them through the process of what works, so that they’ll know what to do when they are off at college and all grown up.

On a last note, here’s a post on all the Down syndrome groups on Facebook, in case you want to reach out and connect with other parents on Down syndrome dandruff, scalp conditions, psoriasis (or anything else).

Some More Down Syndrome Related Posts

Thank you! This was so helpful! I’ve been so perplexed by my daughter’s sudden onset of crazy amounts of dandruff..just realised that it may have to do with being indoors since the past three months because of the lockdown and with the air conditioning running, the air inside can get pretty dry.. have been using Head & Shoulders but no luck. Will definitely try the T-gel. Thank you again!

I hope it works! I know we've had the opposite - my daughter's dandruff has almost disappeared - I think it might be because of the increased humidity? But we still wash once a week with the T-gel. xo

Marcus and I both have a few annoying skin issues, so I didn’t realize until he was older that Ds (and not jus my genetic hand me downs) was a factor. Double whammy. You’re right about the weather, environment. It’s 6 degrees here today and hat weather, Hawaii sounds fine! :) Anyway, my real point is we need a different regime in each season here!

really?!! a different regime for each season?! what do you do for each one?