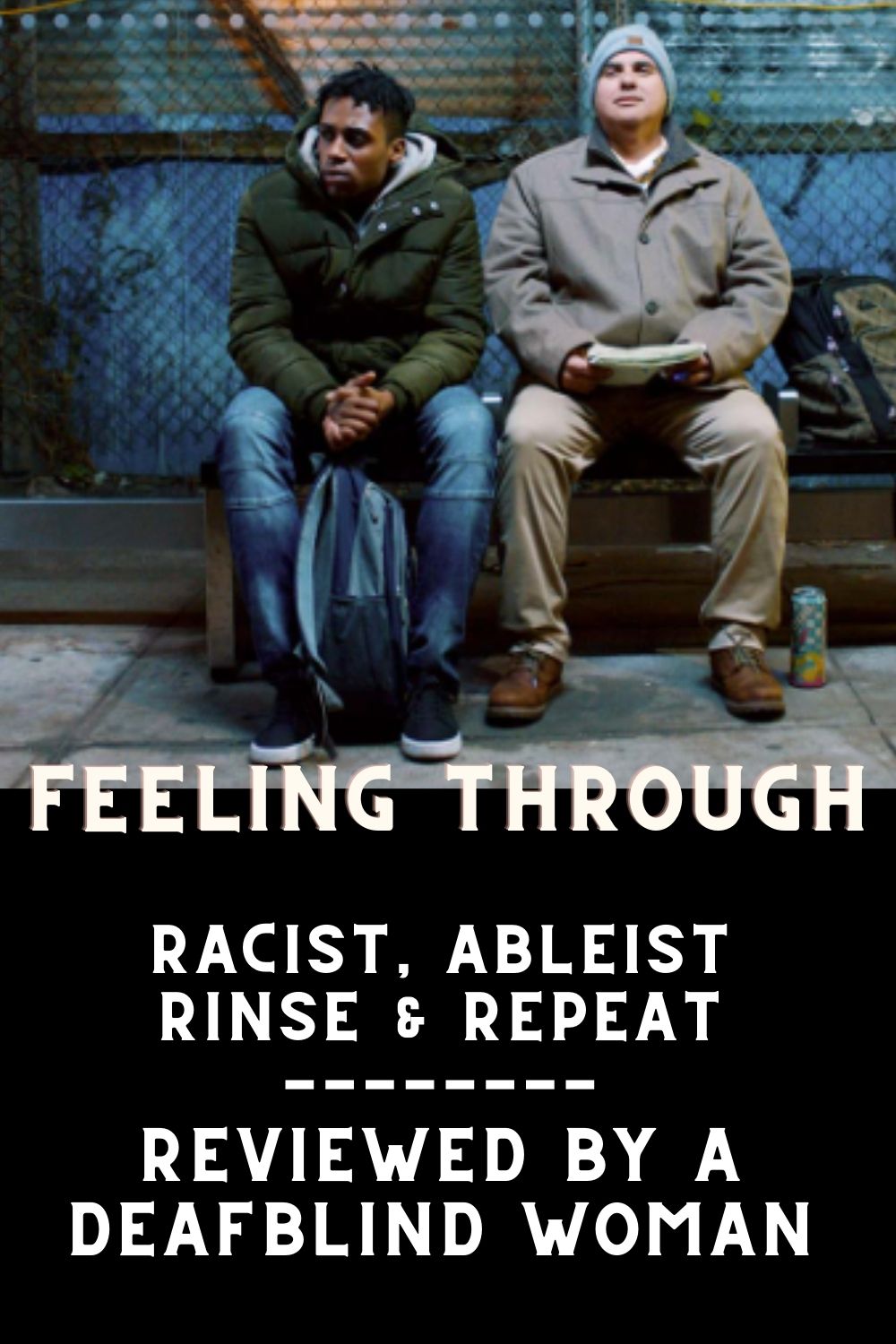 It took me several weeks to see the movie after its release. There was no audio described or transcript/screenplay made public for Deafblind people to be able to access the movie until several in the community complained. Then, a transcript finally came out that had several typos and seemed rushed. Finally, I saw the movie via a combination of watching the audio described and captioned version with some assistance until I could finally read the transcript.

When I saw it, I was horrified and crestfallen.

It was a terrible movie, not only in how it portrays the Deafblind man, but in its portrayal of the protagonist, Tareek, a houseless black teen played by Steven Prescod. (Note: Although the transcript identified Prescod’s race as black, it did not identify the race of Taranto. Sighted assistants have reported to me that he appears white.)

Although I have nothing bad to say about these two actors and was happy that a Deafblind man was playing a Deafblind part, this was the only good thing I could rejoice about this movie.

I have since learned that Artie was based on a real character named Artemio who immigrated to the U.S. and did not know braille. Although I do understand that there are Deafblind people who unfortunately slip through the cracks and do not have the same access to resources an education as most of us do, I felt like this fictionalized depiction of Artie was a missed opportunity to tell THAT compelling story of a resourceful person through his lens than the story that was told.

To me, fictional Artie seemed to be a hapless and selfish character who bumbled through his tasks by nabbing and taking advantage of whatever passerby might come along, and then turning the entire responsibility of himself over to that random stranger. Although I can’t speak for all Deafblind people ever, that is really not the way the majority of us go through life.

I work in assistive technology, and what I noticed most about the film was that although Tareek was equipped with a smart phone, Artie had been completely and unrealistically stripped of any technology that disabled people depend on to access their world.

In the story, the houseless Tareek is looking for a place to crash by texting his friends, when he runs into Artie, who holds out a sign asking for help. Many deafblind people do use communication signs when interacting with a public who largely doesn’t know how to communicate with us. But most of the time, we might only ask for a simple tap to indicate when a light has changed, or we may ask for a small amount of guidance that would take someone only a few minutes out of their day.

Artie asks for help finding a bus stop which is fine, but then proceeds to:

Deafblind people have many methods of doing things, but I guarantee, the vast majority of us would not do it the way that Artie does it.

Deafblind people can and do use smart phones, usually by connecting them to a Bluetooth digital braille display.

Most of the same apps that are available to sighted people are available to us. We can get directions with navigation apps, read bus schedules, and call an Uber with them. But they are also invaluable to create connections between us and the sighted, hearing world. We can use our smart phones as communication devices, they can tell us what dollar bills we are holding, they can help us to flag down a particular bus, and show the bus driver where we want to go and even watch for our stop with them.

But Artie has been stripped of basically all the tools that Deafblind people use for independence and was only left with a pen and paper and printing on Tareek’s palm.

These are legitimate low-tech solutions that people use in a pinch, but not routinely in the middle of the night with a total stranger to get home.

There are national programs that provide this equipment to most Deafblind folks, but sometimes Deafblind people don’t have access to tools and the training to use them. However, when representing one of the only deafblind characters in all of popular culture, when most of the public doesn’t understand how we do anything, this portrayal of a very unrealistic deafblind person does more harm than good.

(This photo shows a man in jogging clothes with a guide dog. He has his hands on a braille display which is held by a strap around his neck. Digital braille devices connect to smart phones and are key tool to connect blind and Deafblind people to the world.)

The bigger problem in “Feeling Through”

But the reason it was necessary to show Artie rather hapless and without tools is actually the bigger problem in this film. Artie was not so much a character as he was used as a plot device for Tareek’s redemption.

The story is through the eyes of the down-on-his-luck Tareek, who takes advantage of Artie by robbing him on the sly when Artie hands over his wallet to him. I found this portrayal of a black criminal minded youth to be very troublesome and concerning.

Aren’t we ever going to move past this trope of black thug youth on the streets?

Can’t we do better?

It is really not the job of black youth to play criminals needing redemption through encountering another underrepresented person who is supposed to be “worse off” than themselves.

Activist and Attorney, Haben Girma, who is black and Deafblind, had similar feelings about this film. “Racism permeates the entire project, from failing to racially identify white characters in the transcript to portraying Black boys as criminals.” She told me that she was approached in 2018 to help fundraise for it, but that based on the descriptions and clips she was given, she was very concerned about the message that it gave to underrepresented youth. “America does not need another film portraying a black person taking advantage of a disabled man.”

When I started watching the film, I was hopeful that maybe we would see some real interaction between Artie and Tareek.

Maybe we could get to know something about their lives and how they accomplished their goals, maybe they could even help each other out (Could Artie have offered Tareek some money or maybe even a place to stay?) But instead, I was appalled to see a Deafblind man who didn’t know where the bus station was, fell asleep in the wee hours of night at a bus stop, and gets ripped off unawares by a black kid.

Then, I believe I was supposed to feel warm and fuzzy when Tareek somewhat redeems himself in the end, but I didn’t.

I just felt like racism and ablism, rinse, repeat.

This matters because when the general public does not tend to know anything about Deafblind people, the very few media representations we get are very important. A negative or misleading depiction can cause us more discrimination and lost opportunities in employment, education, and community. If I go in for a job interview and the employer thinks of poor Artie tripping over construction cones and getting robbed without even knowing it, I have and uphilll battle to convince him that I am a responsible, aware and competent person who will not need constant caregiving just to walk down to the coffee stand.

I was hoping this film–which until pressured, didn’t bother to make itself accessible to deafblind folks–would wither and die. But instead, it has been nominated for an Oscar. How original. A nondisabled person’s exploitation of disabled people as prop for the appropriate amount of heartstring tugs is not a new thing.

The 2019 documentary, titled “Code of the Freaks,” calls out tired disability tropes seen in movies by playing a montage of nondisabled actors winning an Academy Award for playing disabled people in movies which largely are inspirational porn-themed tearjerkers. “Feeling Through” does right by hiring a disabled actor for a disabled part, but that isn’t enough.

We need disabled screenwriters, directors and producers who will make realistic films about our lives from our point of view and our reality.

Crip Camp, a nominee in the documentary category, is a step in the right direction. Somehow, “Feeling Through” managed to sneak past the “piercing gaze” of those who are trying to make the Oscars move in a more authentic and diverse direction. My hope is that the Academy will be savvy enough to see it for what it is and not vote for it to win this category. There are much more fascinating stories out there about underrepresented communities than these same tired white, nondisabled versions of what they think our lives should be.

She is co-owner of an adaptive technology company. Find her at LisaFerris.net