How to Get Free Hearing Aids 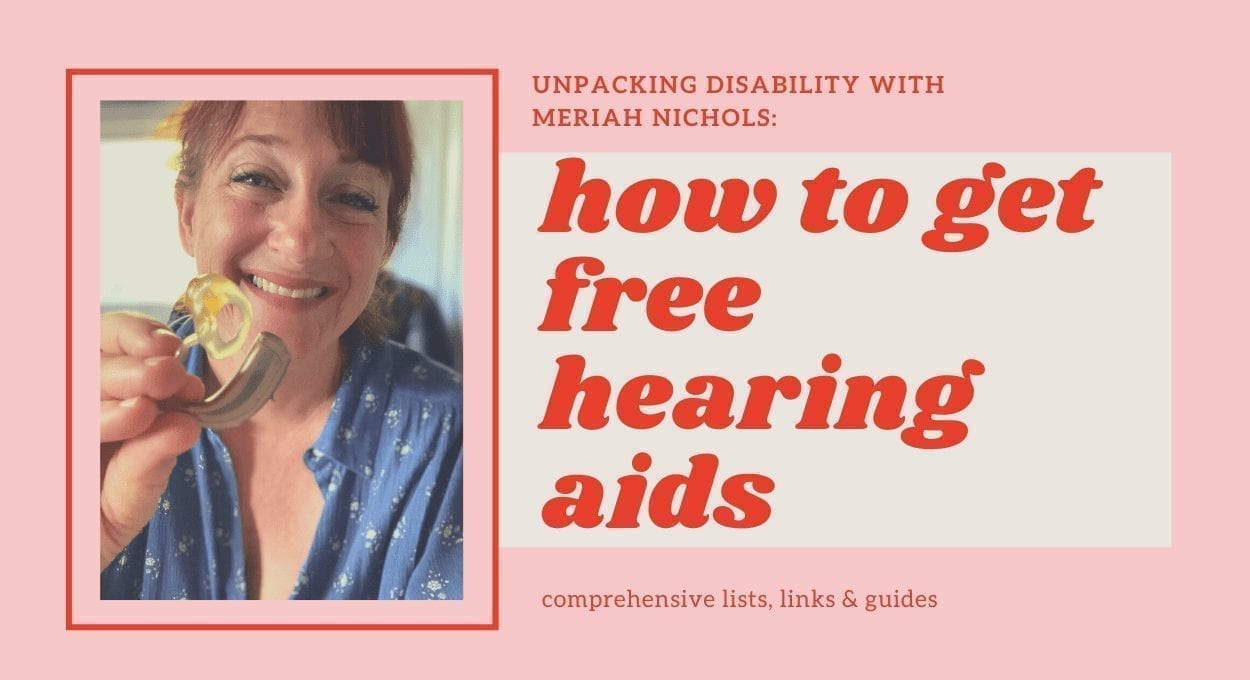 This is about how to get free hearing aids.

If you have questions about other resources or this, you can contact me in my “You Ask, I Answer,” series or join my Patreon to ask questions in my monthly open-house.

“I need a hearing aid but I can’t afford it”

If I had a dime every time I’ve heard that said, I’d be the proverbial rich woman.

But it’s also true that hearing aids are ridiculously expensive.

Hearing aids are not fully covered by most insurance. You would think that they are some kind of luxury item – nice, but ultimately unnecessary – from the amount the cost and the difficulty in accessing affordable aids.

Hearing, in and of itself, is becoming a luxury.

From a personal perspective, I have been wearing hearing aids since I was 11 years old. They have often caused great financial strain in my family, and have never been easy to afford.

When I hit rock bottom, financially, and needed new hearing aids, I applied to the California Department of Vocational Rehabilitation. Since I needed hearing aids in order to find and keep a job, they gave them to me. Yes, this was through a program, but it did teach me that it is entirely possible to get free hearing aids in the United States: you just need to know where to look.

For those of you who are walking where I once did, desperate for a hearing aid but really strapped in affording them, this post is for you.

First, here’s a run-down of my own hearing aids:

A Rundown of Hearing Aids

How to Get Free Hearing Aids

Please click the links below to go directly to the sites to apply for the free hearing aids.

Better Hearing Institute has a listing of over 55 different private programs that provide loans or grants to people who need hearing aids.

They spin out the mighty and comprehensive pdf-with-links, “Your Guide to Financial Assistance for Hearing Aids“ (and trust me, that’s a link you want to bookmark!)

Most of their resources are for people who have low incomes.

Link to the site: www.visionandhearing.net

They help people whose income is above the government’s established poverty-levels but who still find it difficult to afford quality hearing aids.

In other words, you don’t have to be low-income for this one; you just need to have a hard time paying for those ridiculously expensive hearing aids!

Link to the site: www.audientalliance.org

This is a Starkey-funded program that provides used and recycled hearing aids to people with low-incomes.

Link to the site: https://www.starkeyhearingfoundation.org/hear-now

This is an employment program for people across the disability spectrum. Each state has it’s unique Department – sometimes it’s called “DOR” and sometimes it’s “DVR” or “DR”, but they are fundamentally the same.

If you are not currently working, or if you want to re-train yourself or follow a different career trajectory, and you need hearing aids to make that happen, look into Voc. Rehab.

Just checking to see if you are still reading!

Not really though. There really is a link to make them: Electronics Project: Super Hearing Aid

The link is here: www.lionsclub.org

Some Medicare Advantage Plans cover part of the cost of hearing aids – they are not free, but they are significantly less.

To find out of your plan covers this, call your regional agency on aging, and talk with one of their CHOICES counselors.

Rotary, like Lions, has programs that help pay for things like hearing aids. Also like Lions, this happens at the local level, so check out your local Rotary Club.

The link for Rotary International: www.rotary.org

These guys do just about everything, and helping out with hear-ware is in there too.

The link for Easter Seals Hard of Hearing and Deaf Services: https://www.easterseals.com/our-programs/medical-rehabilitation/hard-of-hearing-deaf-services.html

Help America Hear (formerly The Foundation for Sight and Sound) provides free hearing aids to people with limited financial resources. They also provide educational scholarships for those of us with hearing loss, which is pretty cool. Apply for both through their website.

I’m not sure how great this one is, and I hesitated to add it because it seems like they just give you a discount on hearing aids, not actually free hearing aids. Still, if you are with the military, it’s good to know about these programs, and to ask around and see if there is something that covers the total cost.

They seem to help more with college (- specifically, undergraduate) scholarships than with hearing aids, but they do have a page with resources on where to apply and get free hearing aids or low-cost hear-ware.

This would be my first stop if I needed free hearing aids for my child.

It looks pretty quick (- 4 months), and they seem to be very streamlined.

The language on their site rubs me wrong, “..the program is designed for people who demonstrate a personal inability to financially provide for their hearing health needs.” WOW! Like we can’t take care of ourselves.

Also, “Do you qualify for the Gift of Sound?” – seriously?!

Anyway, they have funds for free hearing aids, so I guess you might want to check them out too.

Link to their site: https://www.miracle-ear.com/miracle-ear-foundation

It seems like they do more with scholarships than with hearing aids, but that applications that I read seemed pretty open-ended. You could apply for a scholarship for a compilot or roger’s pen if you needed one, or for hear-ware or for school.

The application process for a free hearing aid is clearly outlined with each step being very explicit.

They have a call option (which always makes me scratch my head, because, WE ARE HEARING IMPAIRED, seeking a hearing aid! How are we going to call?!), but at least it’s just an option and you can do it all via downloads and snail mail.

Here’s the link to their site: https://www.starkeyhearingfoundation.org

This looks like a really good one for parents looking for hearing aids or hear-ware for their kids.

It seems to cover everything – an open application process – and it’s very explicit.

All the Low Cost or Free Hearing Aids

Well, that’s about it.

Those are enough links to get you going, but please check out the guides that I’ve included below.

The guides have even more information on organizations, as well as what to say when applying, other ways to go about securing your hear-ware.

Both guides are free and are downloads.

I’ve also included some outstanding websites below – they won’t help with hearing aids, but they are terrific sources of information.

They have a great website, chock-full of resources, webinars, conferences and information related to hearing loss. They don’t actually give out free hearing aids, but they serve as resource for just about everything that is hearing loss-related. They also provide excellent advice about our rights, how to get hearing aids through IEP’s and so forth.

Similar to Hearing Loss Association of America, ALDA has a very useful website, great to bookmark for resources and information.

Please note: it does cost me time and money to produce these PDF’s, so I truly appreciate it if you become a patron (- even $1/month) and download the PDF’s that way.

However, I will always keep these as a free option, for those of you who have disabilities that need that access, and who may not be able to afford becoming my patron at this point. You can become my patron by clicking here.

7 thoughts on “How to Get Free Hearing Aids”