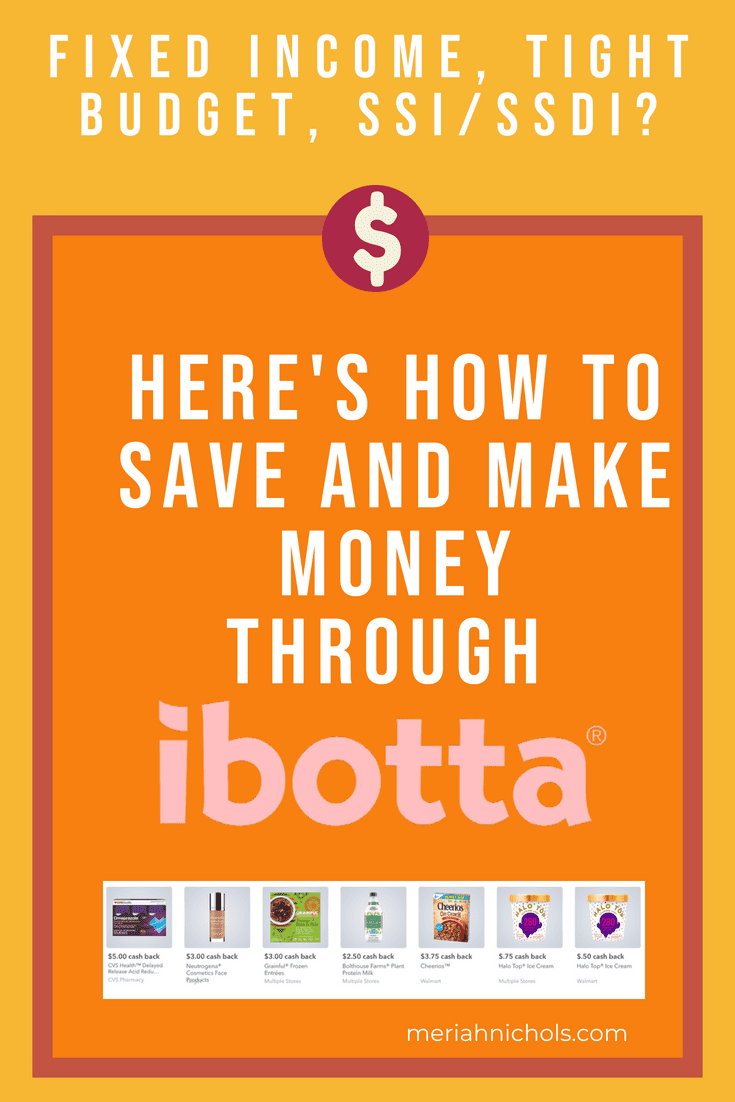 This post has affiliate links. That means that if you sign up using my code, I’ll make a percentage. I want you to know though that there is no way I’d be writing this post unless I myself used this and I honestly thought it had benefit to others. This isn’t some scamming post. Read my disclaimer for more!

This post is about Ibotta, a rebate-based app and site. I’m writing about this with those of us with disabilities specifically in mind, as we often live off a fixed income with few opportunities to make a little extra money. Ibotta is a perfect way to do that, because the money back isn’t going to tip the scale and kick anyone off SSI/SSDI, but it’s enough to give us enough to enjoy some extras. Also, Ibotta pays us in gift cards or PayPal, so it’s a little under the radar.

Ibotta is a free app that will helps you get cash back for things that you buy. When I heard about it, I was stuck in a hamster wheel of ‘how on earth can this BE?’, wondering what the catch was, because this couldn’t be without one, right? Well, actually, no. There is no catch. Here’s how the app works in a nutshell:

It’s like couponing on steroids. Plus, when you join, you  get a bonus $10 for FREE!

Is Ibotta Too Good to be True?

It’s weird writing a post like this because I have never been into couponing (too much work, I’m not organized enough) but I have lived off SSDI (a fixed income) and I have had to make food and items last. I realized that a lot of us who have disabilities or who have kids with disabilities are used to thinking outside the box and used to making a dollar stretch, mostly because we have to.

But whatever. I know it now, so I’m passing it along.

All. The. Stores. Are with Ibotta. I’m not kidding. I usually do a lot of shopping at Target and Walmart (both) and they are right there. What I did not expect were retailers like Groupon, E-Bay, iTunes, Amazon, Gamestop, Etsy (Etsy?!!!), Apple (even Apple refurbished stuff), LaneBryant, Gap, even pharmacies, airlines and hotels.

It’s a good idea before doing any kind of shopping to just whip out the app and check. Even if you are going to reserve a hotel room in Greenland for your upcoming trip (lucky you!); check. I wouldn’t be surprised if they had a deal.

Screenshot of Some Deals When I Opened Ibotta to Write This Post:

Do You Get Paid Real Cash with Ibotta?

Yes, you get paid real cash with Ibotta.

Here’s how it works:

Every time you upload a receipt and claim your rebate, the money goes into an Ibotta account. When that account hits $20, you can cash out. You only have 3 options with cashing out: gift cards, Venmo or PayPal.

For me, it works out well to cash out with gift cards (because they have everything: it’s easy to just say, okay, the money that I save using Ibotta will be the money that we play with; no save, no play. I can then cash out with Fandango for movies with my kids. It’s pretty great. If (or when) I make a lot of money with Ibotta, I’ll cash out through PayPal, but until then, the movies work out well.

What About the Tasks?

Sometimes in order to unlock a rebate deal with Ibotta, you need to complete a task, like watch a short video or take a quiz or something. The quizzes are easy; the videos I just play but don’t watch (I hope I don’t get in trouble for this). The tasks are probably “the catch” – and how Ibotta pays for the rebates, some sort of advertising/marketing ploy. But it’s easy enough to do it and doesn’t cramp me up , so that’s a win.

When you shop with an online retailer with Ibotta, go through the Ibotta app:

And that’s it. You will get your money back through Ibotta directly with in-app purchases.

We can even form teams and help each other save, because we help each other earn additional rebates! If everyone on the team redeems rebates, we get more of them. Since I’m already earning, you benefit. Join my Ibotta team HERE.

It’s a little bit of a pain in the butt, but for me, it’s worth it because I really, really like stretching my money and allowing it to pay for fun stuff with my kids (which I couldn’t afford if I didn’t do this).

Anyway, so after I upload the receipts, the rebate money is placed into my account within 48 hours (I usually mark my calendar for when to check).

You can link your store loyalty cards with Ibotta. You browse the app, add the items you are interested in, complete the tasks if you need to, then when you check out at the store, scan your store loyalty card – Ibotta will automatically give you credit for it (so, no need to scan the receipt later). I always check later though.

Ibotta is an easy way to regain some of the money you spend.

The great thing about it is that, as I’ve mentioned, you get it back in ways that are under the radar and even if it was above the radar, it’s only enough money to allow you some splurges; it’s not enough to kick you off of SSI/SSDI (if you have that) and it works well to give people on a fixed income some extra money.