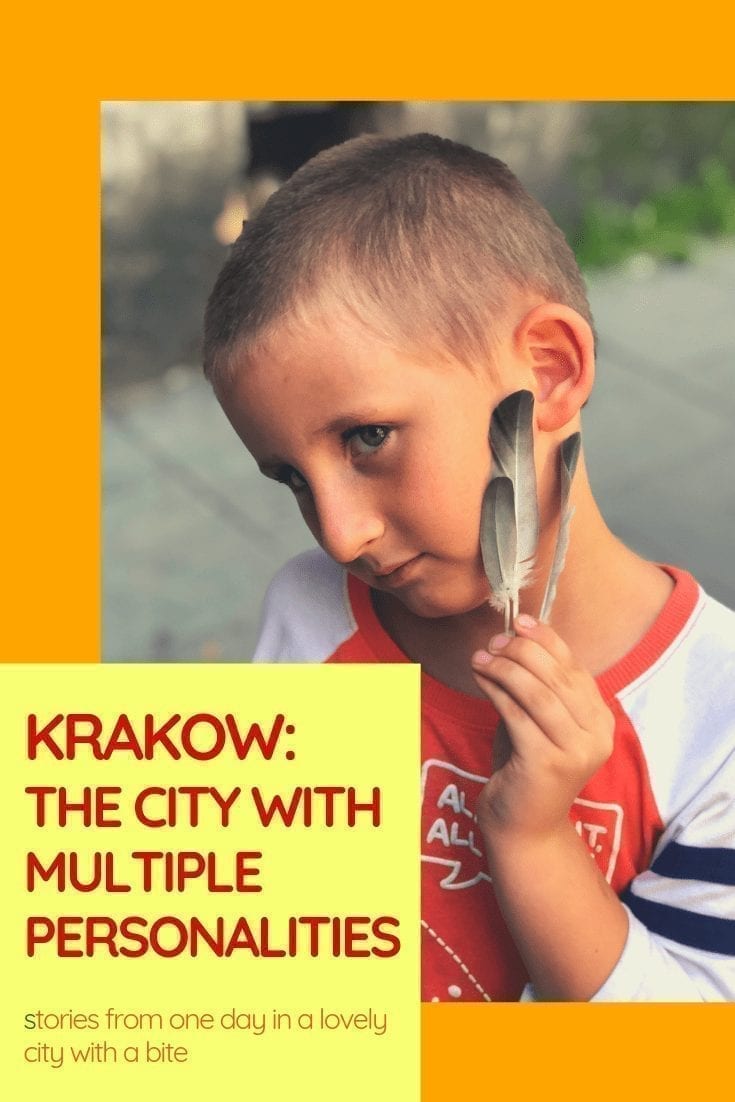 We took the night train to Krakow from Budapest, leaving at around 7pm and arriving around 12 hours later, at 7am. 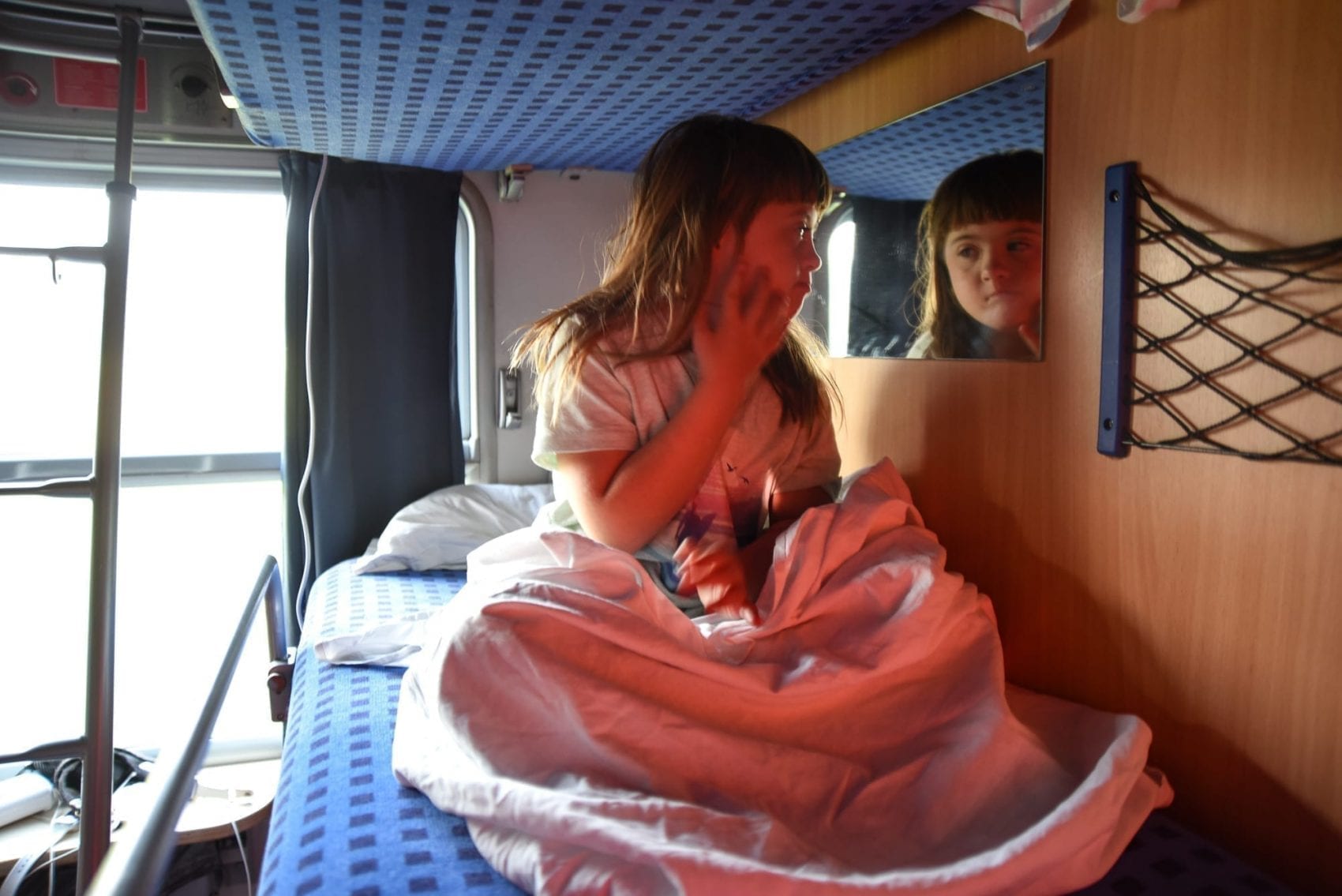 After the whole mess with getting to the Budapest Air B’n’B and the Air B n’B itself, I decided I’d take things the easy in Krakow. With only one night there, I reserved a hotel room, put all of our essentials in a couple of backpacks, parked everything else (including the stroller) in the luggage storage place at the train station.

I made the train reservations for the next day to Copenhagen, then gathered my kids up and set off to explore. 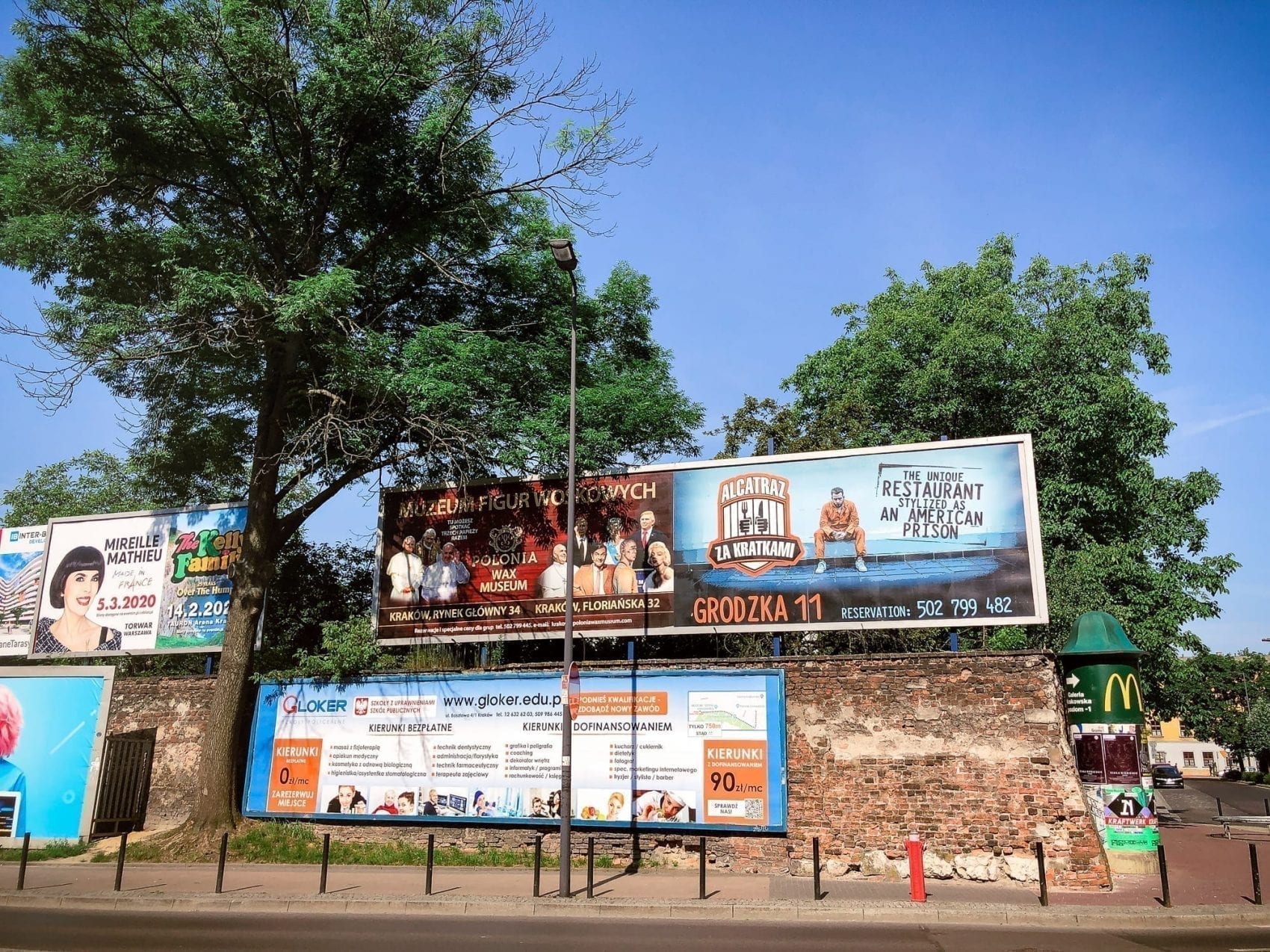 Now, I approached Krakow with such a clean slate, it was kind of ridiculous.

I knew nothing about it, just watched an episode of Rick Steves (or was it Andrew Zimmern? Or Tony Bourdain? Sigh… Tony Bourdain 🙁 )

I meant to read up on it while on Budapest, at the very least, on the train ride over. But I didn’t in Budapest, and then on the train ride over, I was so tired, I ended up not doing much of anything except sleep. So I was about as unprepared and un-expecting as one could get. I thought, hey, we’ll just walk around, see whatever interesting thing comes our way, and get an ice cream.

We went to the hotel, parked our backpacks, got a map, then headed out to find breakfast. 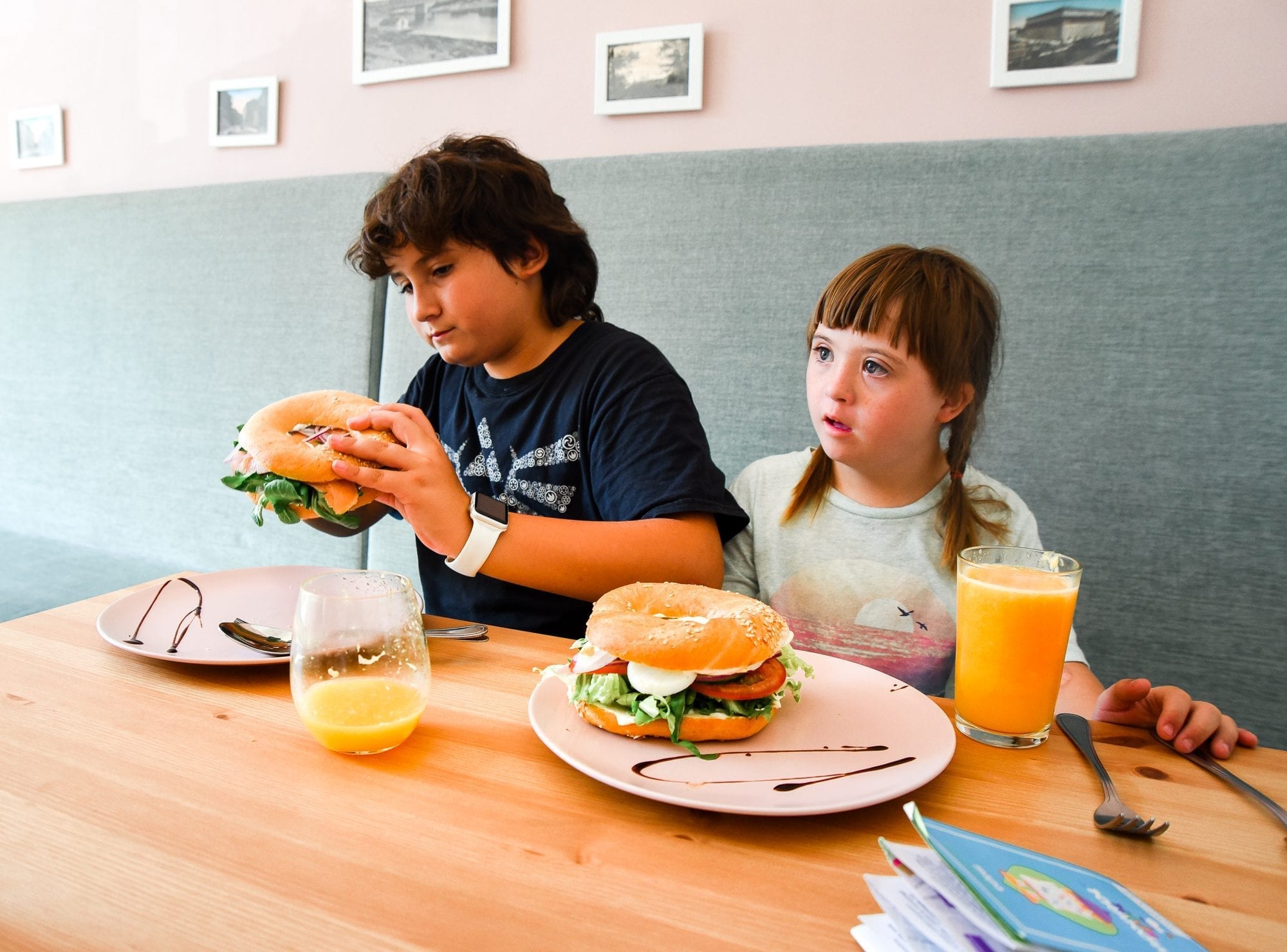 This is apparently how they do bagels there! 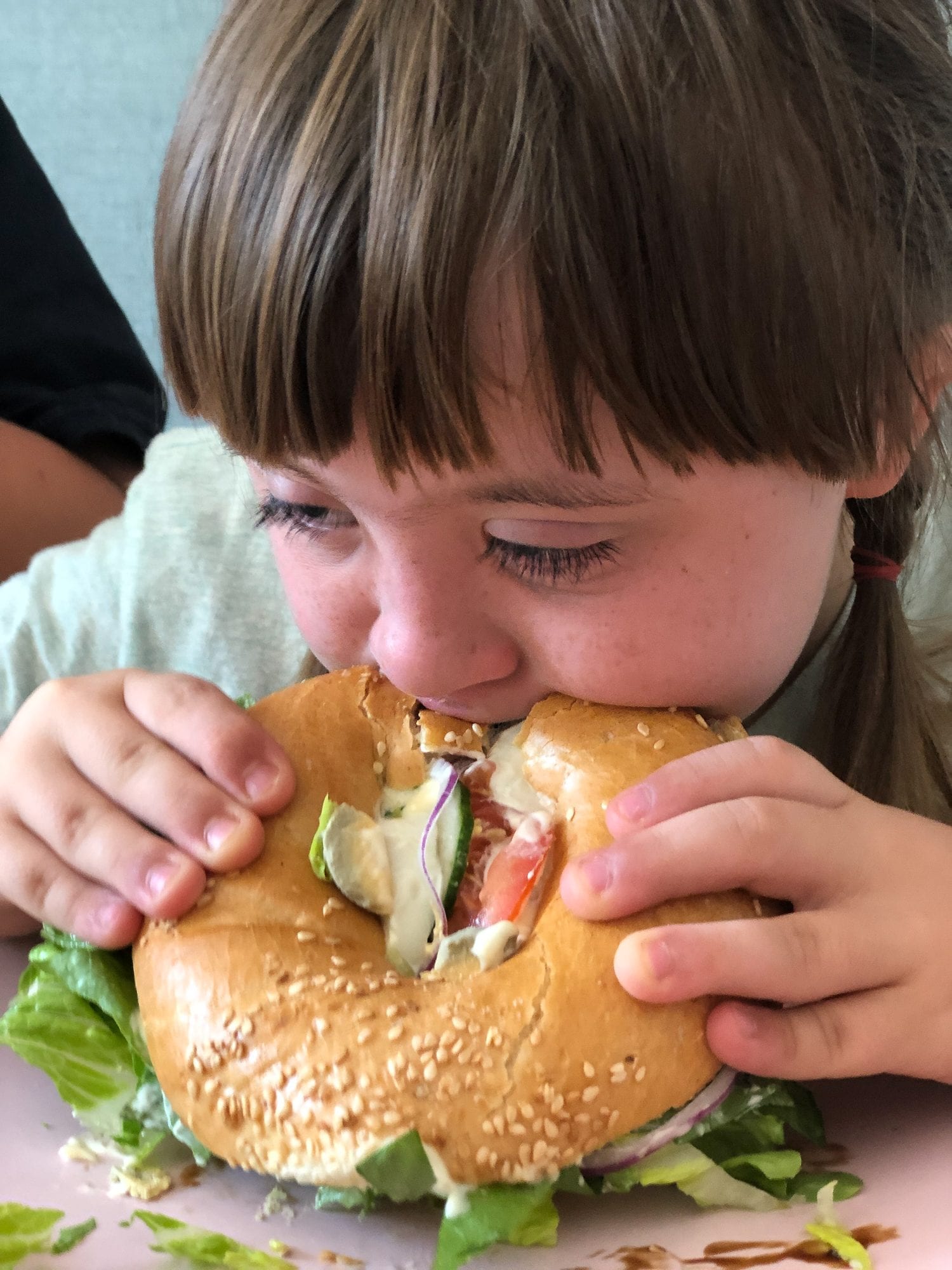 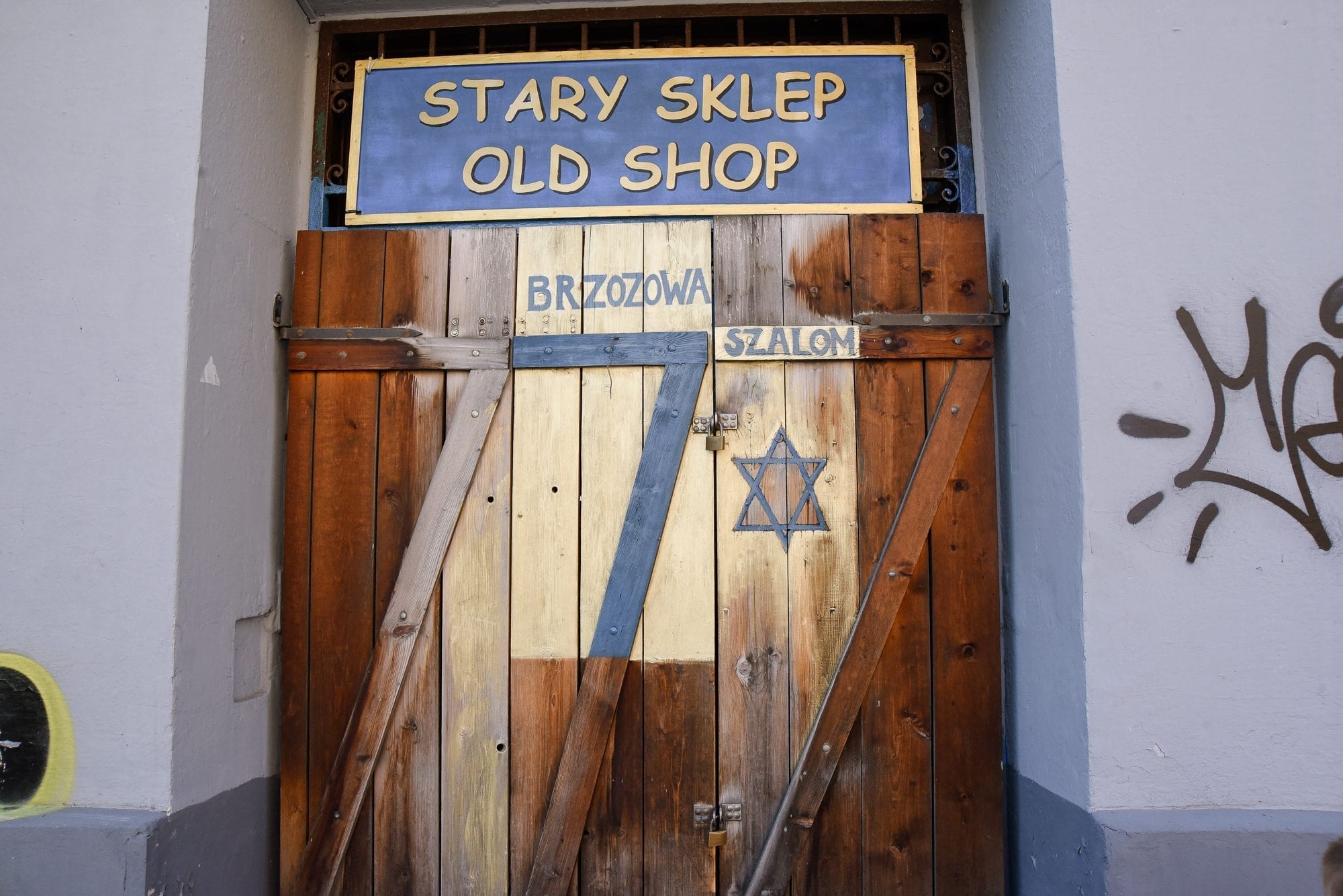 I asked the nice bagel shop people where we should go, “what’s YOUR favorite place in Krakow?” and we set off in the direction they circled on the map. 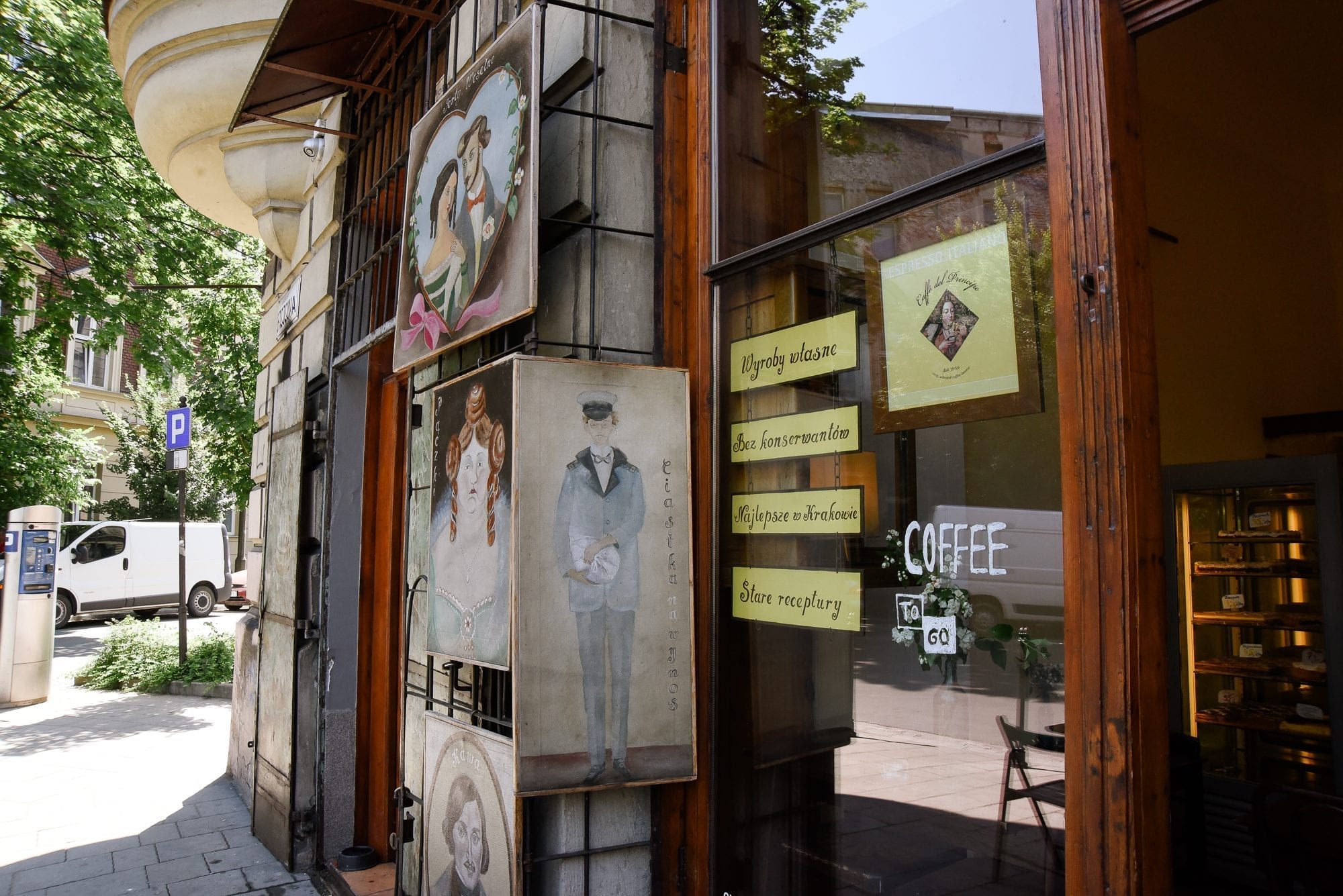 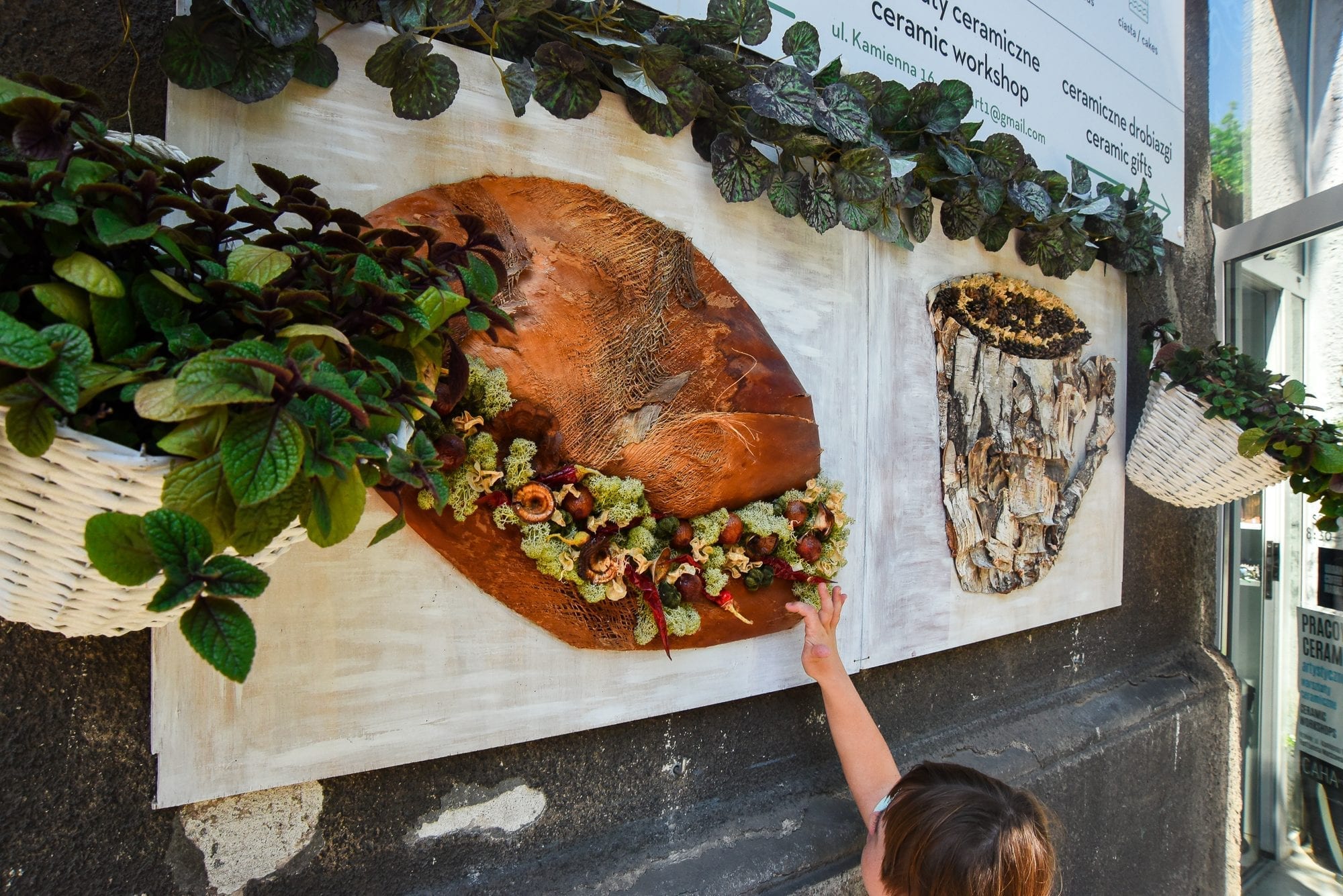 The Jewish Quarter of Krakow

We followed their route and ended up in the Jewish quarter. 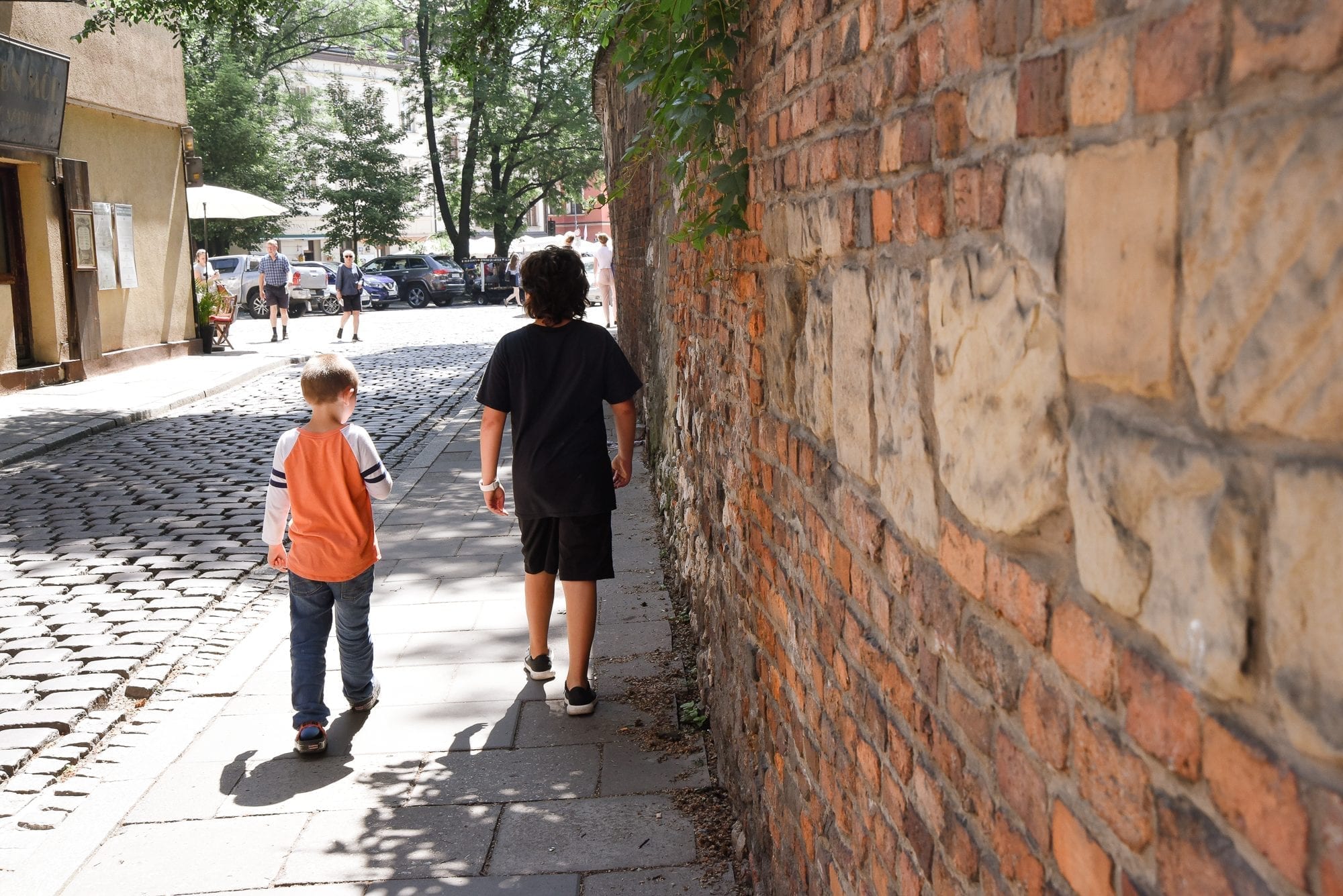 You guys, I am so embarrassed to say that I didn’t know that Auschwitz was outside of Krakow, and I had no idea that Krakow had been such a center for the horrors of World War 2. I was set straight pretty fast by walking around and just reading signs.

There were a lot of people on Jewish Heritage Tours. 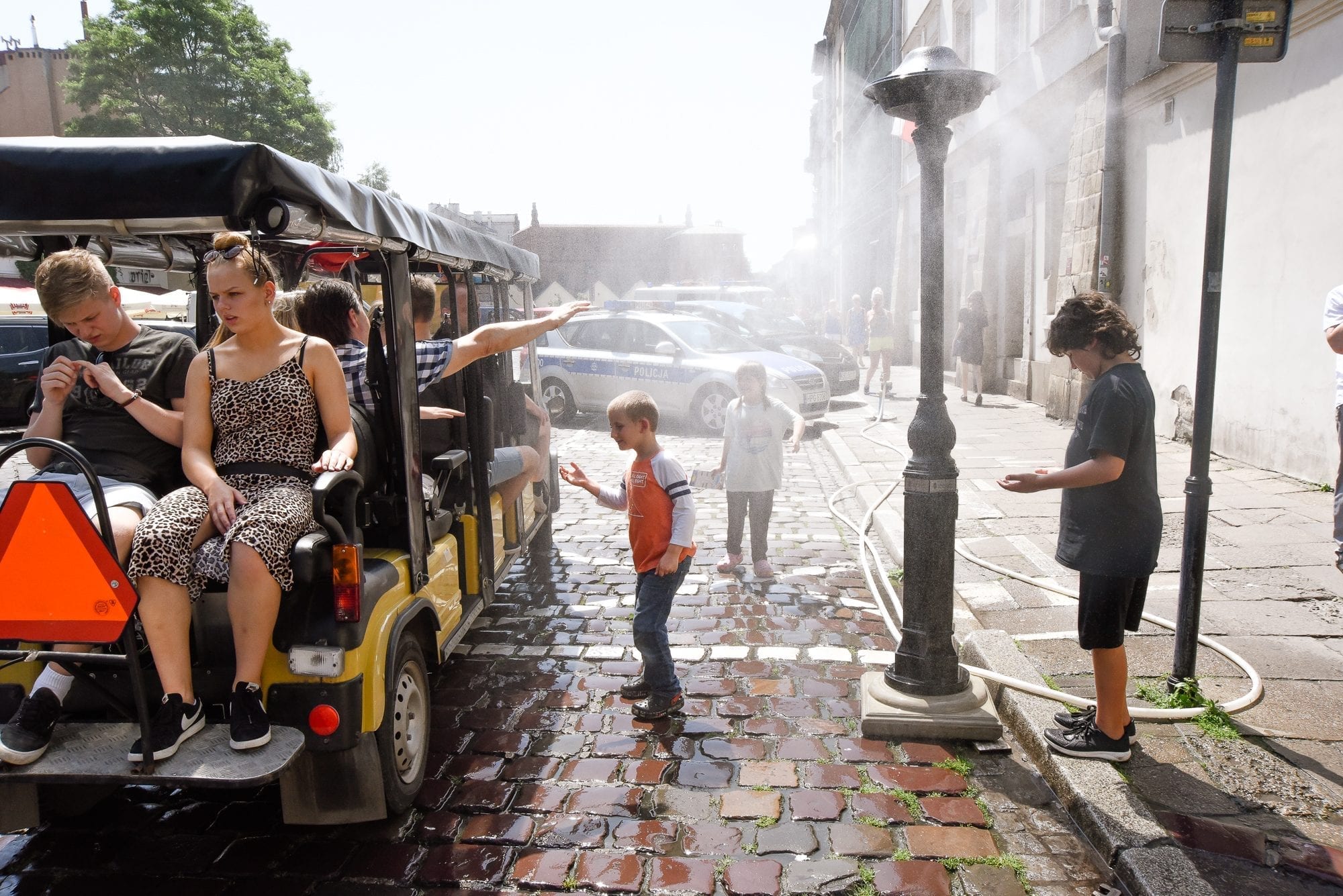 I asked the nice (and very pretty, heavily tattooed) front desk lady at the synagogue where we should go next and she circled another place on my map to head for. 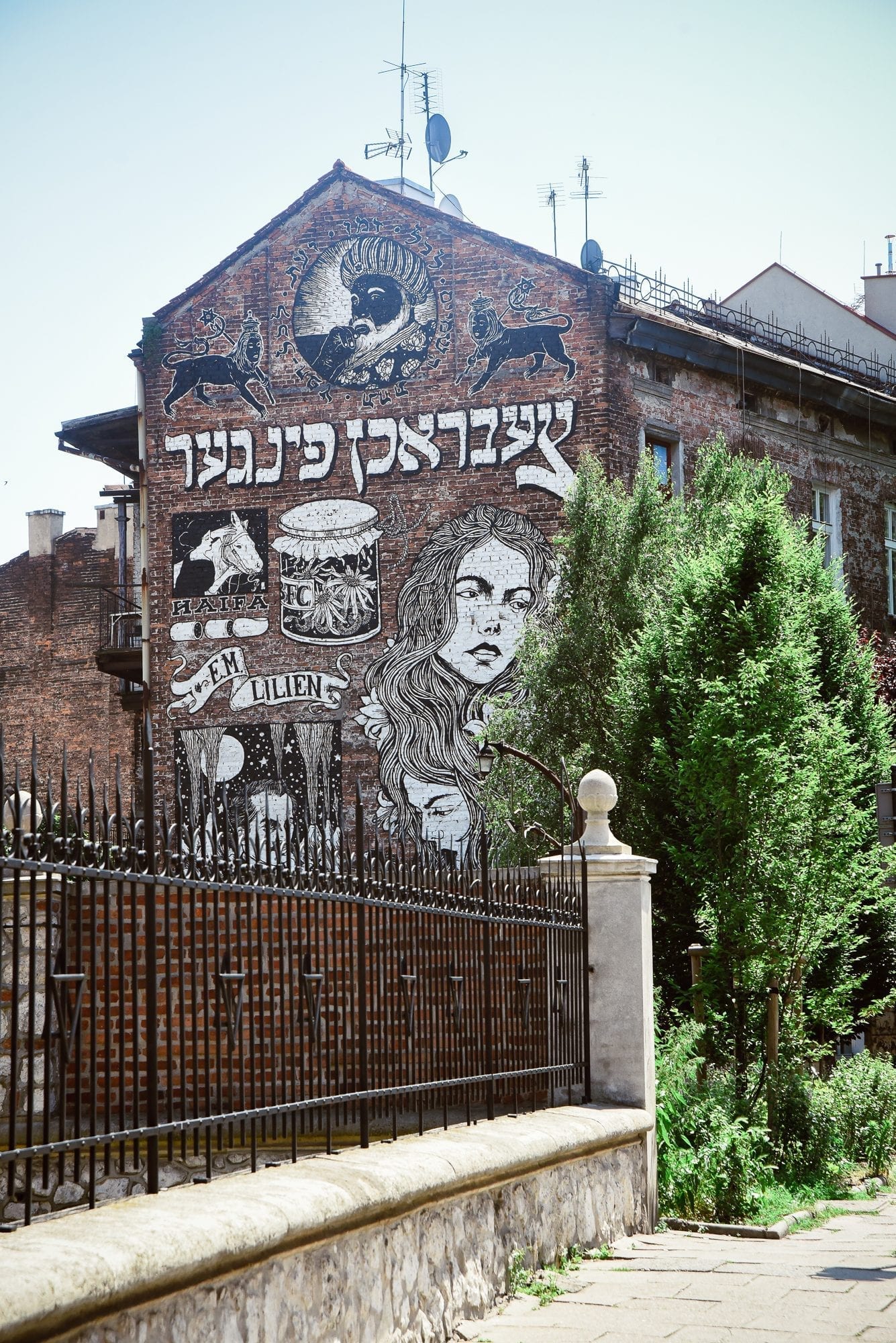 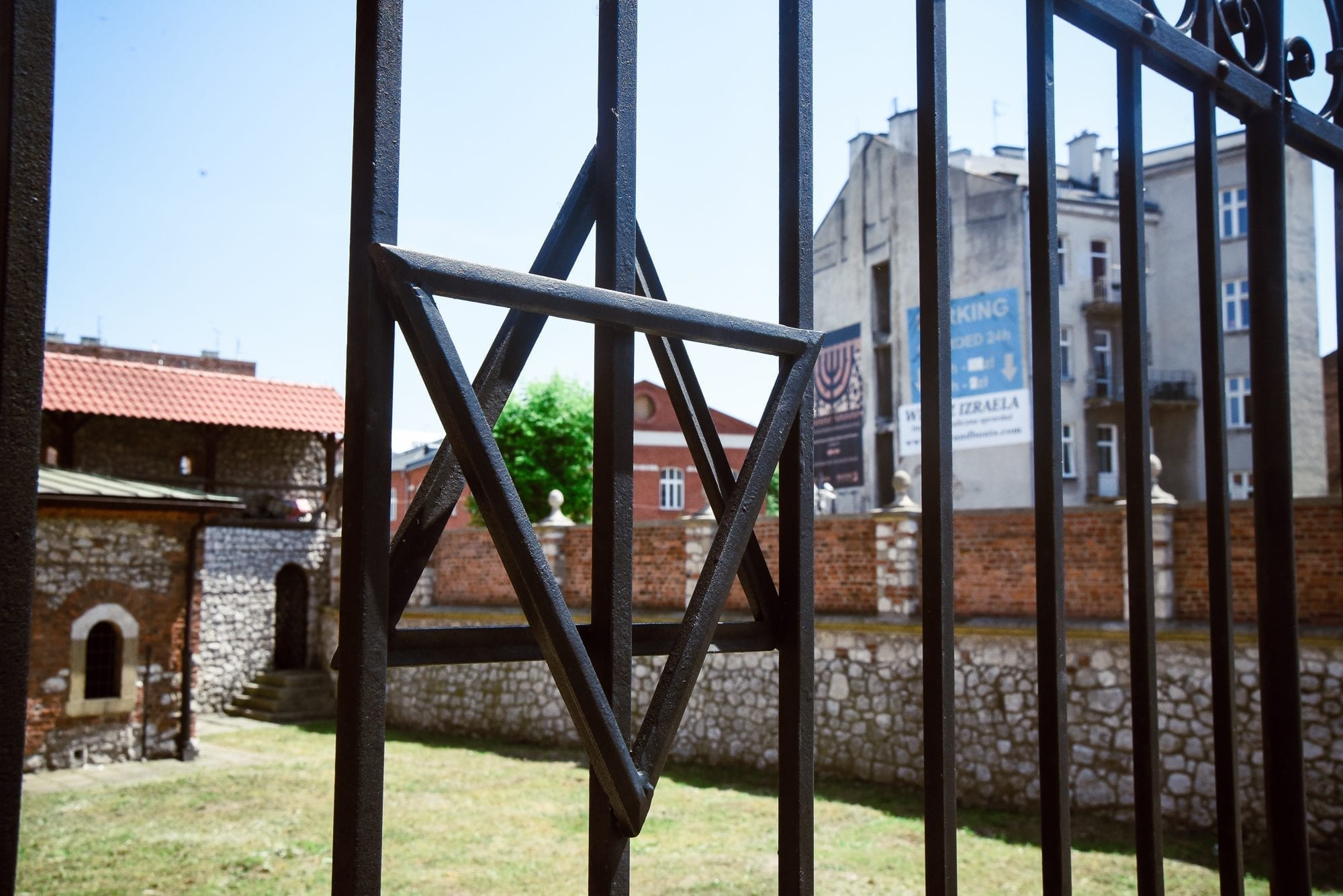 The place she recommended turned out to be a bookstore!

I am such a sucker for bookstores.

I don’t really read much anymore (thank you, my children, for that gift), but I used to wolf down books, reading till my eyes hurt and dawn broke and I’d be astonished (and chagrined) that I had once again gone all night with the story.

This was a really good bookstore, the kind that had obviously been a bookstore for decades.

Everything was stacked high and nestled around wood and I could have stayed there for hours if I didn’t have kids running around wanting to play with those stacks of books like they were jenga pieces.

So we moved on. I asked the bookstore clerk what she recommended next but she didn’t speak English, so we just kept going down the street until we came upon an ice cream shop, and that seemed like a Sign From God.

I wasn’t really sure where we were going, but I was hoping we’d end up around the castle area.

I tried to ask some people but they were pretty firm about brushing me off and saying, “no.” 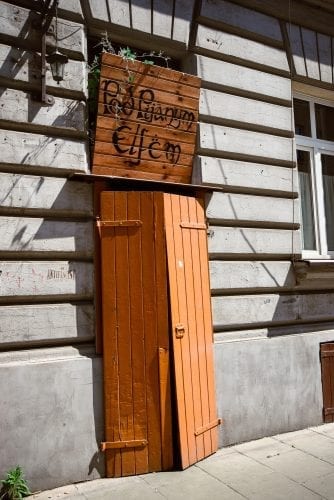 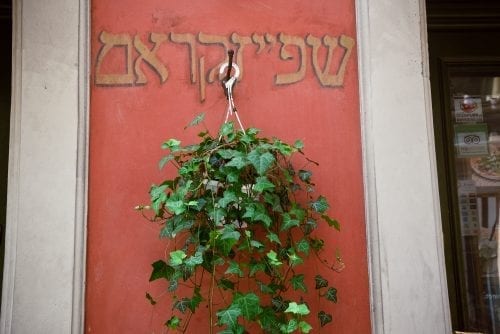 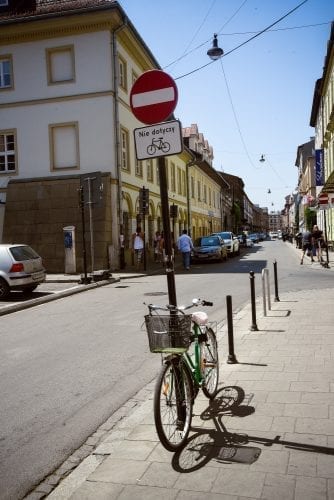 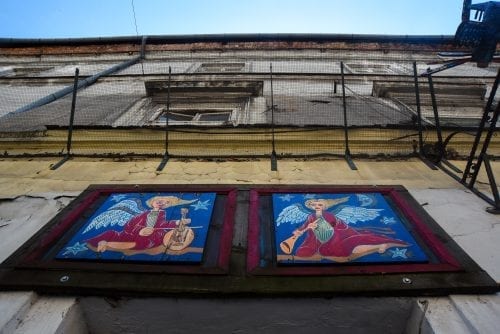 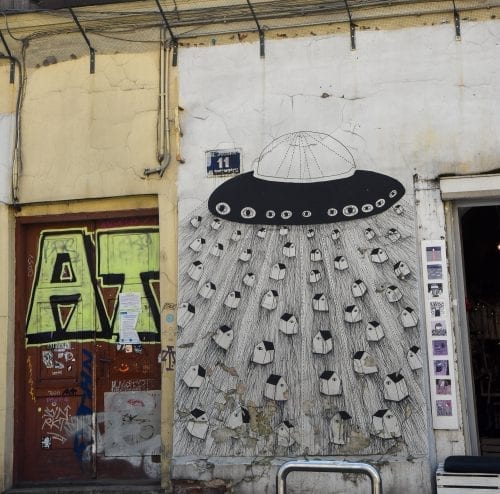 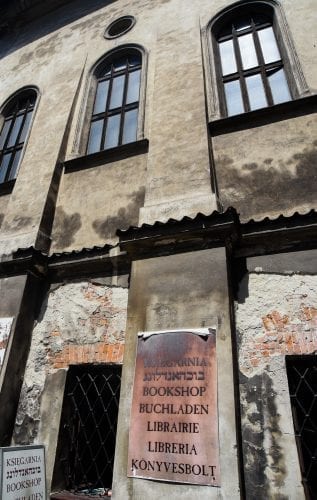 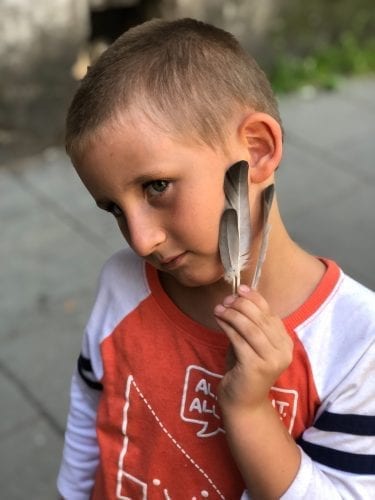 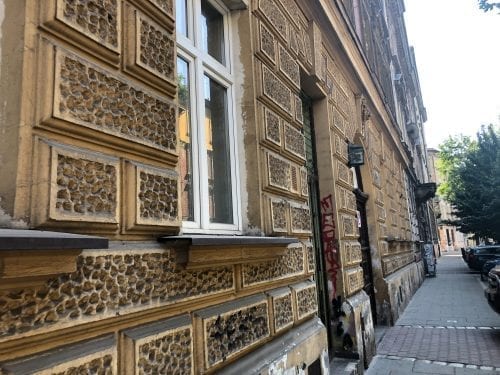 I was starting to get tired – like, physically tired as well as just tired of people on the street looking grumpy and all the brush off’s and ‘no”s that I was getting when asking for directions, and so when Moxie wanted to climb a tree, I thought it the perfect time to plunk down and rest a little. 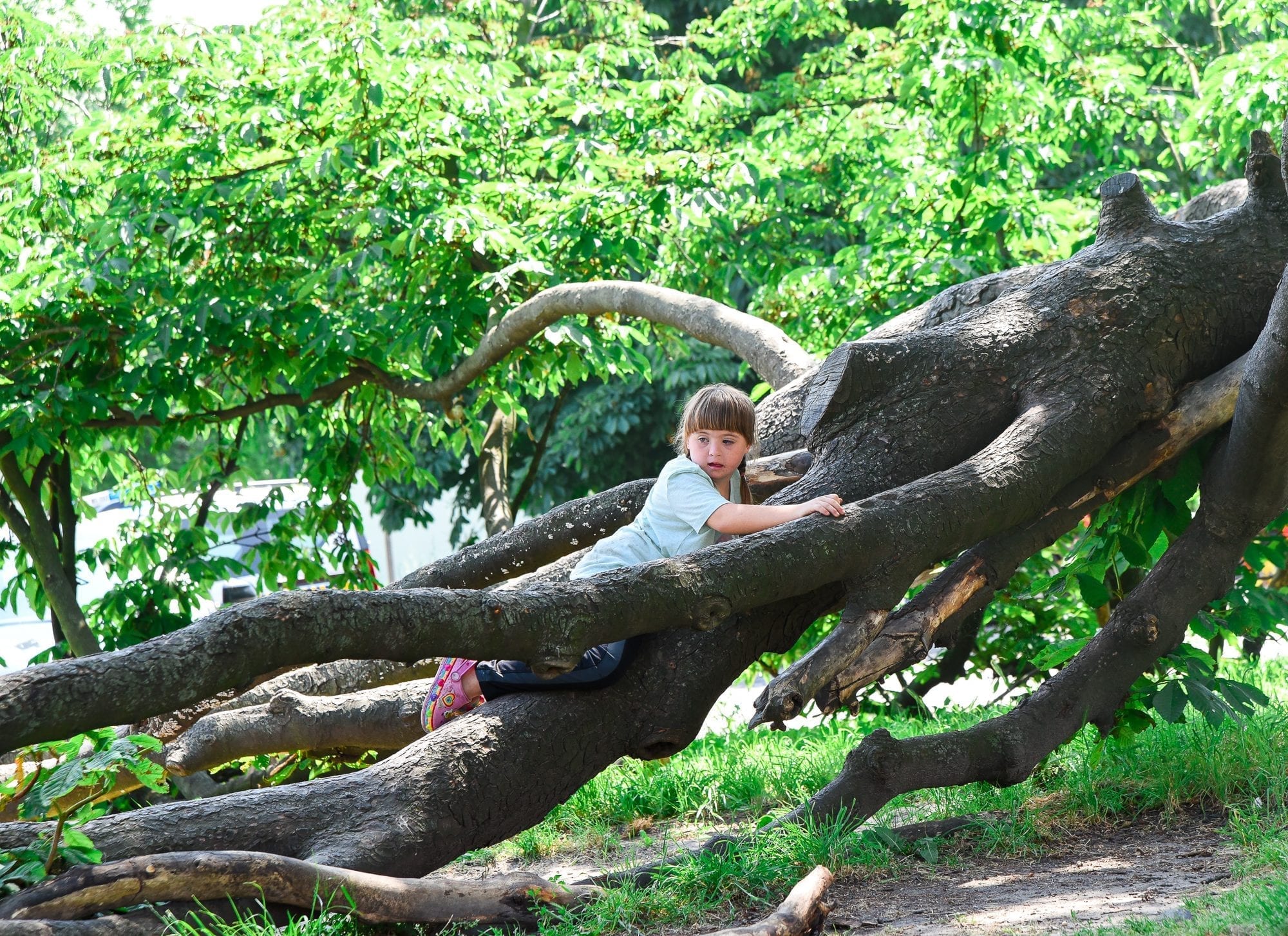 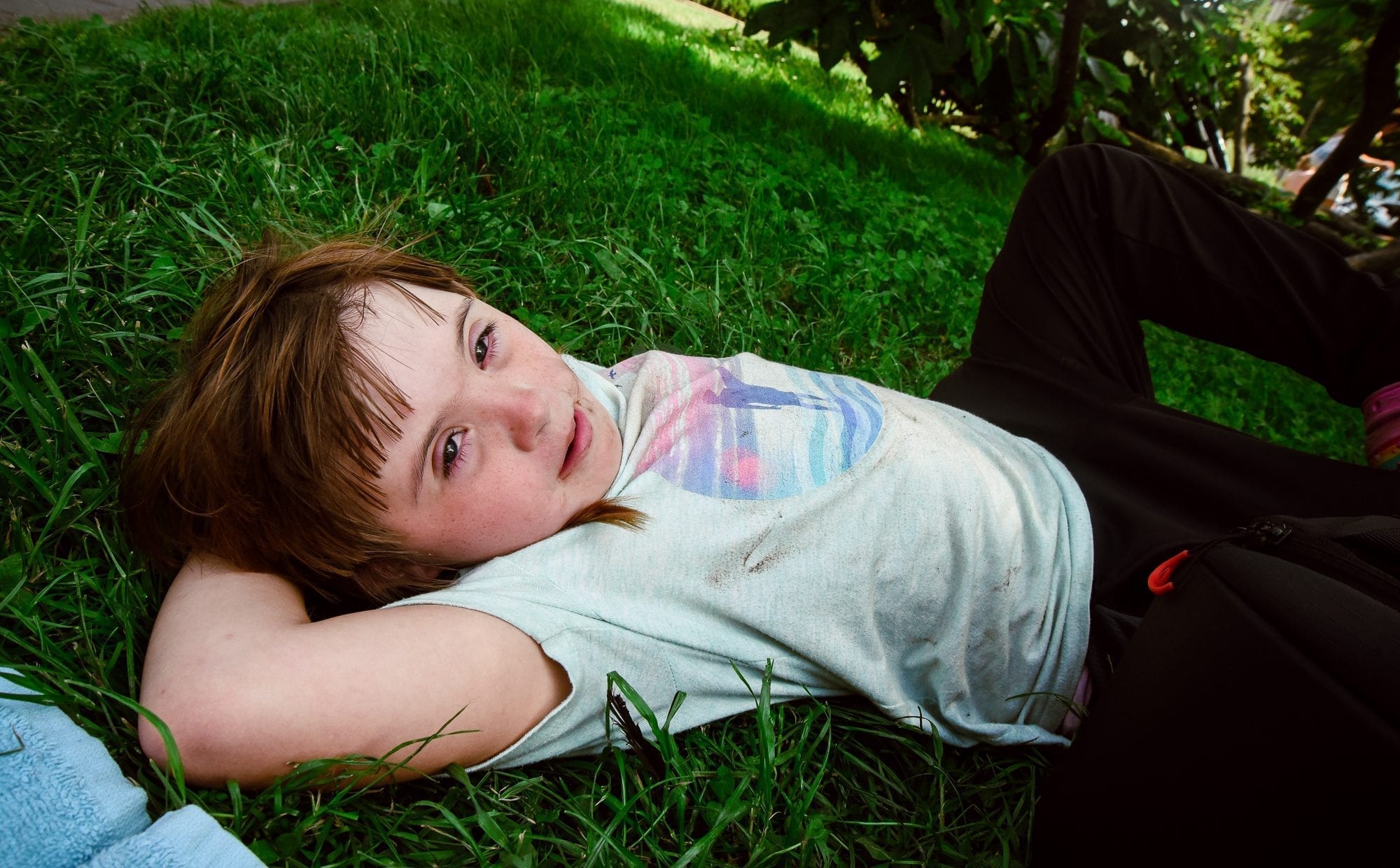 We just kind of zonked out for a while, then brightened up and realized we were right by the castle.
Cool! 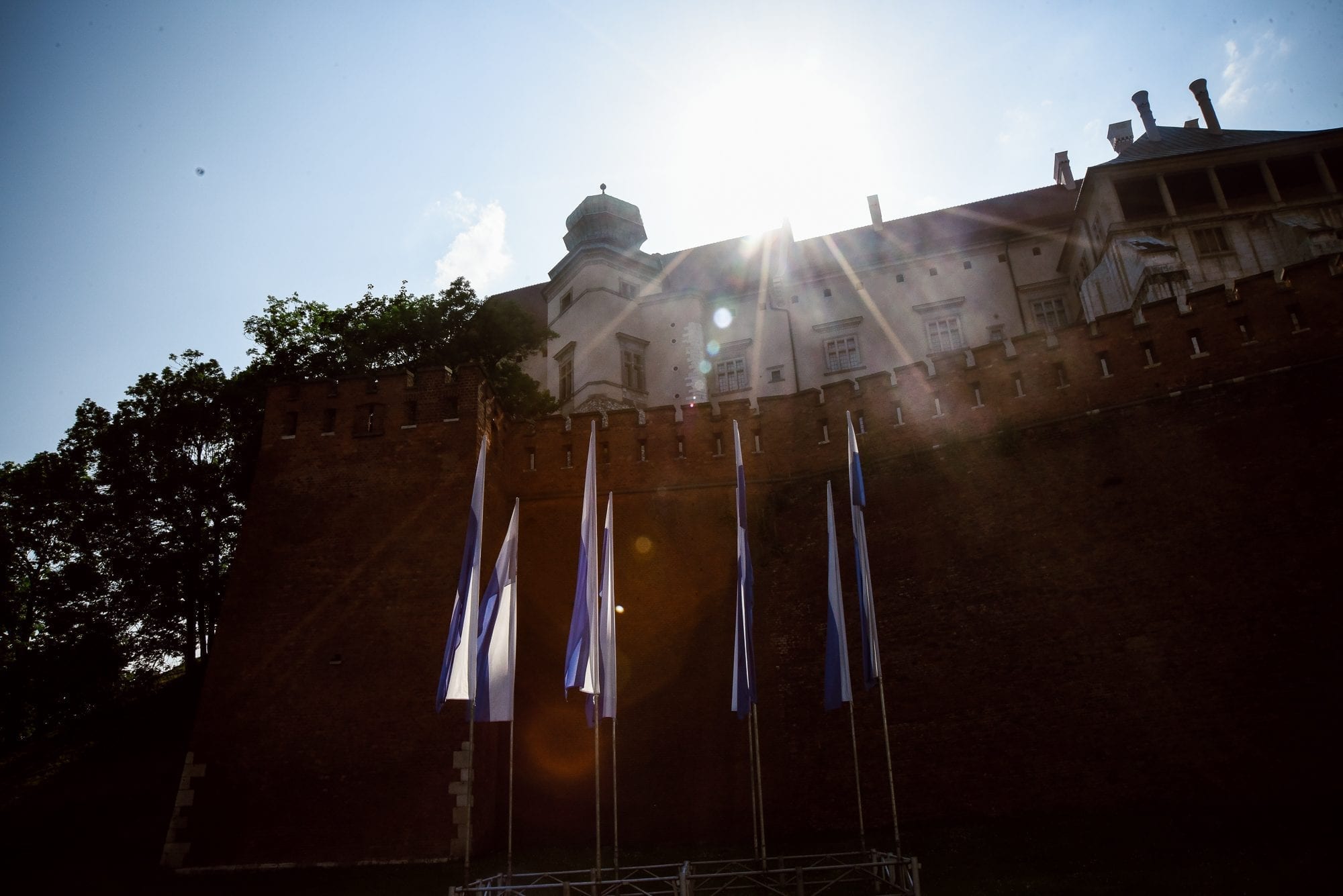 The Castle in Krakow

Like I said, I really didn’t know anything about Krakow before we went there.

It was just, it looks interesting, it’s on the way, the kids are part Polish, huh.

Also, like I was saying in Budapest, while I do love beauty, I end up not caring much about it if the people-vibes are not that great.

Krakow had been giving me dual vibes – people being really pleasant, warm and friendly, then cold, unfriendly, uncaring, mean.

I started losing my temper

Like when Mack was doing the pee dance because he had to pee so badly – I walked into the American Bookstore to ask where a toilet was in the area (because, “American Bookstore”, right?! They will speak English!), and the lady just said, “no.”

I was pretty surprised, and said very slowly, very clearly, very politely, “I’m not asking for him to use your toilet, I’m asking where a toilet is in the area.” She just looked at me straight in the eye and said, “no.” 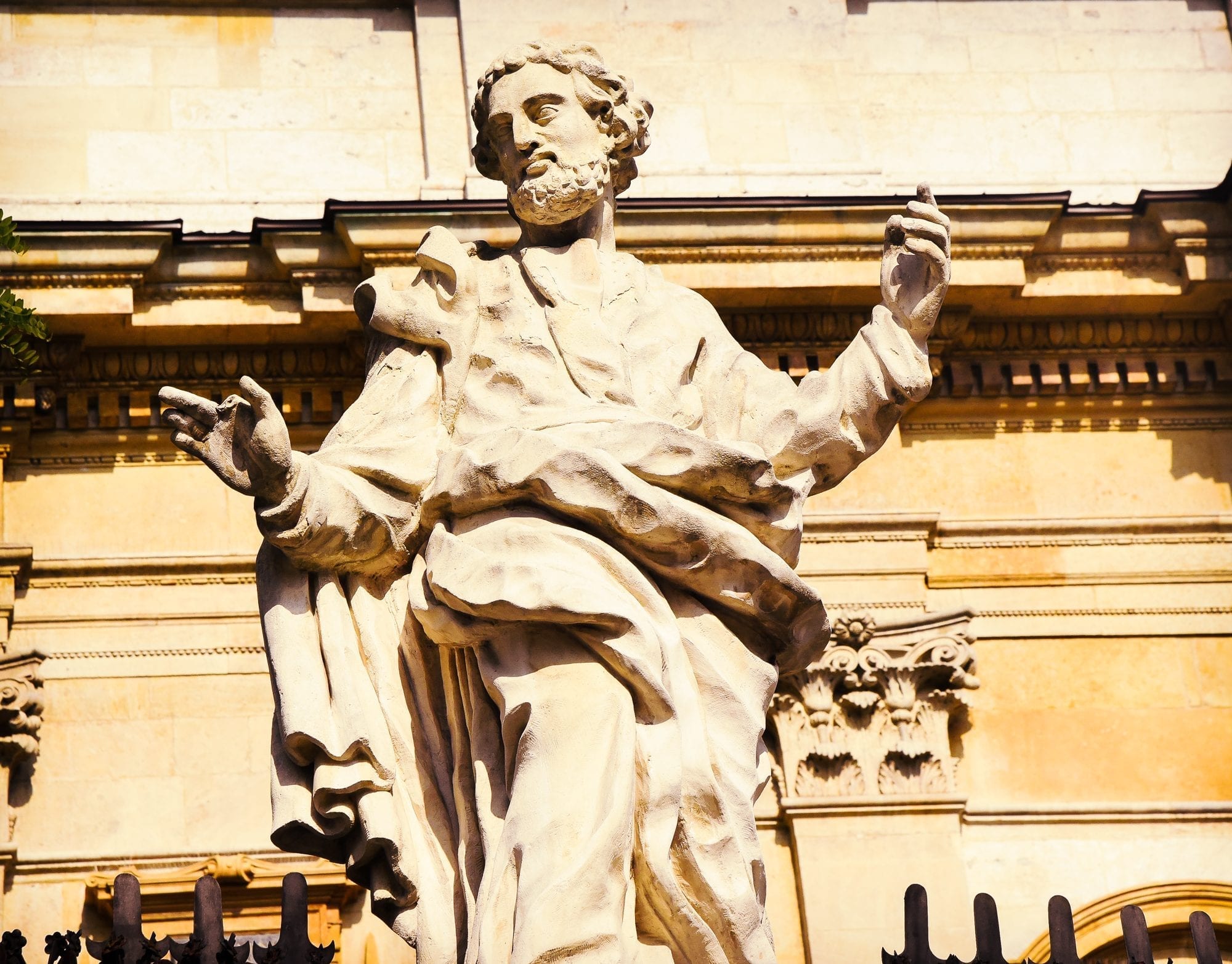 Get some aloha spirit, lady!

I ended up having Mack pee in an alley because all we were getting when asking for a bathroom was cold, firm ‘no’s, then we needed to get to the hotel and no one would even look at the map and address I held out beseechingly.

They just gave me barrels of the hard ‘no”s.

I went over to the taxi driver to just ride back, but they also said no, “it’s too close, just walk.”

I couldn’t believe it.

I wonder where Krakow lost all the love or if it had it all?

Or if it does have it (like all the nice people we did meet), or what is the deal there?

And split down the middle between super mean people and nice ones.

The Jewish quarter is not physically accessible for wheelchair users, with its cobblestones, lack of ramps and stairs. The castle area is; I saw many wheelchair users out and about there.

I didn’t experience public transportation in Krakow, so I can’t speak for that, but I do wonder how willing the culture is to include and accept us with disabilities.

Read More of My Travel Posts:

Travel Books I Find Useful for Budapest and the Rail:

Sammy and I just read your post and we are sad for you! Can you believe we were also at the American bookstore, Sammy was doing the pee dance and they let him the closet that doubled as a bathroom. It was a young guy working the desk. I wonder if the difference between our two experiences is that it was still summer break when we were there and lots of university students were working.

We were there in mid-June, just a couple of weeks before you, I think! But wow, so glad they were nicer to you!

What a fun and spontaneous approach to exploring, just to ask someone at each stop where to go next! Looks like a lovely day apart from the crabby people. I wonder what made the difference there. So interesting that the people in Budapest started crabby and ended friendly, and the opposite in Krakow!

I hadn't thought of it that way (- that people started off pretty nice in Krakow and get crabbier/less kind) but I think it's true. I'm sure the area we were in had something to do with it, and the fact that we were getting tired too. But I still can't get over people looking at the kids and then refusing to help with directions to the toilet or hotel!