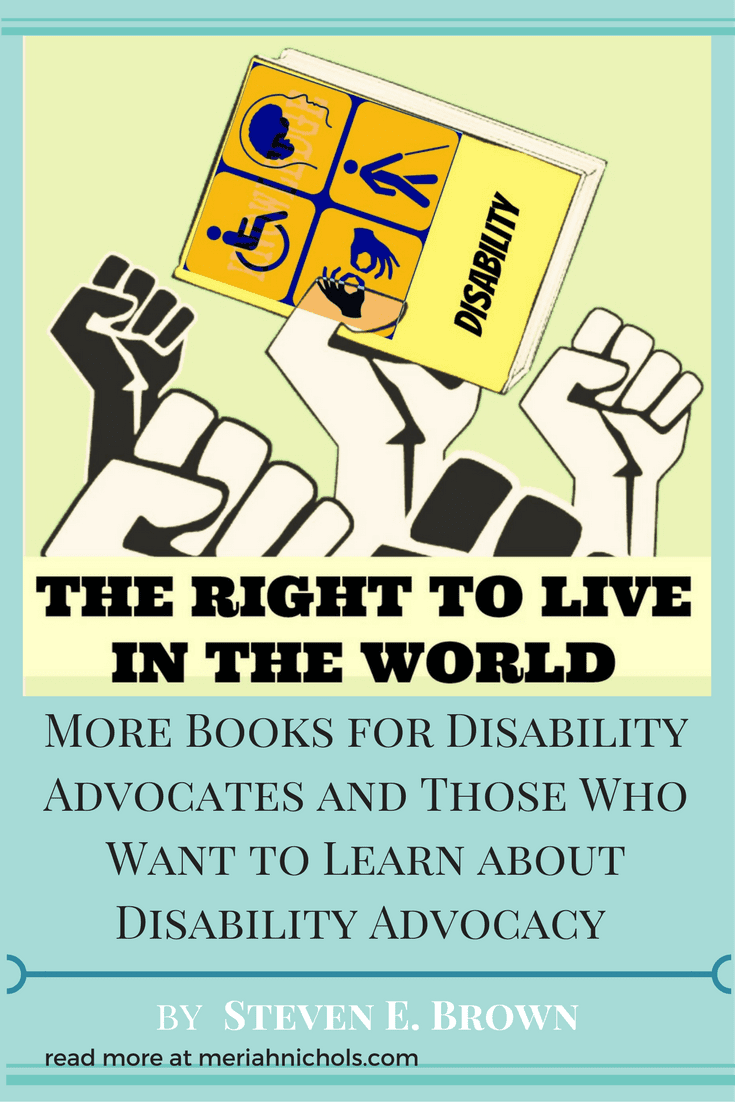 Meriah asked if I might do a post on “disability-related book recommendations? …books that you would recommend for a person with a disability who perhaps grew up with the medical model and is just now starting to branch out in disability culture?”

Since I’ve been keeping bibliographies as long as I can recall and have also maintained a “Suggested Reading List” for the undergraduate and graduate disability studies classes I teach, I had to think a bit about how I wanted to respond. So, in my usual fashion, I begin with some caveats: First, I chose not to repeat entries from both my blog post, “My Top 25 Disability Pride Books” or Meriah’s blog post, “13 Books for Understanding Disability Pride, Culture, Rights, and History”

Second, I’ve only included books I’ve read; there are more books coming out, it seems, on a daily basis, and I’ve only read a limited number, despite the piles of books usually lying around on my nightstand and other parts of our apartment.

Third, when teaching, I’m often asked why disability topics are not included in elementary and secondary school curricula. I know this is changing, but clearly there’s a long way to go. So I’ve begun reading (and writing) books for younger readers. I’m including a few favorites in this list along with adult-oriented books.

Finally, I’ve tried to include books from diverse genres and geared for varied audiences.

A series of essays follows my journey from beginning to identify as a person with a disability; to becoming a disability activist; to a focus on disability culture (including the definition of disability culture I wrote in 1996); and encounters with people and places around the world. While aspects of my life, like every life, are unique, there are also similarities with many other developing disability advocates of the late 20th century.

This is not an easy book to read, because the story of Junius Wilson is horrific—a tale of discrimination, neglect, abuse, racism, and ableism. Wilson was a young, deaf, black man who found himself, inexplicably, in a mental institution. This is well-written academic book, and for those who can stomach it, a tale of disability encompassing most of the 20th century that, awful as it was, was not unique.

Clare has just published a new book, but I’ve not read it yet, so am unable to include it here. However, this book, in memoir style, is a story of transformation, awareness, and difference set in a small, logging town in the Pacific Northwest. It is written poetically, from an author who’s also a poet.

I’ve known Mark Johnson for 30 years, and admire him both as a key member of ADAPT and as a national disability rights leader who excels at facilitating both conversations and action. In reading this memoir, I was amazed at Mark’s journey from a young nondisabled man to learning first how to be quadriplegic, then how to thrive as a person with a disability.

Mark’s southern charm is clear throughout the book, but so is his passion and commitment to a world that needed (and needs) to change. Some readers may recall that in my poem, “Tell Your Story” there’s a section about getting a wheelchair ramp in a movie theater. That story came from Mark and it’s one of many stories detailed in this book.

This book is here because it’s a biography of one of the earliest disability rights leaders of the mid-20th century, who is largely forgotten today by many, if not most of us. tenBroek became blind when he was a boy, as a man he became a lawyer and law professor who helped create the advocacy oriented National Federation of the blind and influenced the Brown v. Board 1954 decision outlawing school segregation, among other achievements.. He was well aware of the need for disability rights and his 1966 California Law Review article, “The Right to Live in the World: The Disabled in the Law of Torts,”, which preceded by only a few years his death at a fairly young age, can easily be seen as a precursor of the Americans with Disabilities Act.

I debated about including this book, because it’s a few decades old and because AIDS and how it is (and those who have AIDS are) treated has changed so much since Shilts wrote this book. A gay journalist, who died from AIDS, Shilts writes about the beginnings of the epidemic like a detective story and how what was often thought of as a “gay” disease was ignored and discounted. This is an aspect of disability rights often repressed but remains a story that deserves to continue to be heard.

Leroy, one of the founders of the Krip Hop, who I’m happy to call a friend explores music, disability rights, and other topics. While this book is a compilation of some of Leroy’s poetry it’s much more than that as well. It’s a trip down memory lane, into the blues, black and blind history, and contemporary black disability rights. Leroy provides a quiz at the end of the book and from both it and the book, I learned a lot.

One of my students, several semesters ago, introduced me to Armagan, a painter who was born blind in Turkey. This biography recounts how Armagan learned to paint, and how he and his paintings became internationally known. In addition, as I read this book for children I learned Armagan is also an inventor, who has created new forms of paint that facilitate his work.

I’m putting another one of my books in here and including two books geared for kids about Ed Roberts, a pioneering disability rights leader who is often considered the (but is more accurately one of the) founders of the independent living movement in the U.S. and who became an internationally known leader. This book is targeted to Middle grade readers, 8 to 12 year olds. Carson and Connally’s book is targeted for younger readers. While my book sat in CD only format for many years, Carson and Connally published their book. After they did so, I had a number of conversations with Diana Pastora Carson, who encouraged me to get my book out as well and I thank her for that.

This book is geared to younger readers than my book on Ed Roberts. It is distinguished in part by the art of the late Patrick Wm. Connally who knew Ed well. I’ve had one of Patrick’s paintings in my offices for over 20 years, so I’m definitely partial to the art here–as well as the narrative.

I read a listserv post that included an article analyzing El Deafo (see #14), which led me to want to read the book itself. When looking El Deafo up I came across Wonder and I’m glad I did. Augie Pullman is an endearing, struggling, delightful character, with multiple disabilities though the primary focus is on facial “differences”. The story focuses on Augie’s fifth grade year, when he moves from his comfortable world of homeschooling to enroll at a school.

Lots of people love this book, which is soon to be a movie (“Into the Rainbow”) starring Julia Roberts. Despite this, I found the book charming, and the author’s decision to provide multiple perspectives about Augie’s life advanced the story nicely. Even though I kept slowing my own reading, so I wouldn’t get through the book so fast, I was still sad to see it end.

I slightly followed the Shangs’ American Girls campaign to get Mattel to make a doll who looked like Melissa, using a wheelchair. But I was really excited when I read that the sisters had published this book, which is both fictional and autobiographical, exploring what it’s like to be an Asian American, wheelchair using girl in middle school.

When I read a synopsis of an article that analyzed this book it didn’t take me long to realize I’d rather find the book itself. While I knew it was a graphic novel, that somehow didn’t register with me as a series of comics, which I’m only saying for any other older folks who might not realize this as well. This autobiographical graphic novel is about the author’s coming to terms as a young girl with having a hearing impairment, using a visible hearing device that she wore around her neck and in front of her chest, and her desire to make friends. Historian Steven E. Brown (PhD, University of Oklahoma, 1981) is Co-Founder, Institute on Disability Culture  and retired Professor of Disability Studies, Center on Disability Studies, University of Hawaii (currently Affiliate Faculty). He served as a 2015 Diversity and Inclusion Fellow for the Association of University Centers on Excellence in Disabilities (AUCD) Diversity and Inclusion Toolkit Initiative, and continues to consult with AUCD. He also works with BCFS in San Antonio on their Emergency Management Division, providing disability expertise.

Brown encountered disability-based employment discrimination based shortly after earning his doctorate, which led to changing his career path. In the 1980s, Brown worked at and directed an independent living center in Oklahoma, organized numerous community advocacy coalitions, and represented regional Independent Living Centers in legislative education about the passage of the Americans with Disabilities Act. In 1990, Brown moved to California to become Training Director at the World Institute on Disability (WID). In 1993, Brown received the first federal funding to research disability culture, which resulted in the monograph, Investigating A Culture of Disability: Final Report.

After relocating to New Mexico, with his wife and partner Lillian Gonzales Brown, in 1994, they co-founded the non-profit Institute on Disability Culture. In 2002, they moved to Hawai‘i, where Brown joined the Center on Disability Studies (CDS).

Brown has published many articles about disability rights and is a national and international speaker. His books include Movie Stars and Sensuous Scars: Essays on the Journey from Disability Shame to Disability Pride (2003); Surprised to be Standing: A Spiritual Journey (2011); and Ed Roberts: Wheelchair Genius (2015), a Middle Grade biography of the late 20th century disability rights pioneer. He is also a co-editor of the anthology, Rethinking Disability: World Perspectives in Culture and Society (2016). Author page at: https://www.amazon.com/Steven-E.-Brown/e/B004H9QX7Y/ref=sr_ntt_srch_lnk_1?qid=1496349465&sr=8-1

Brown relocated to the California Bay Area in summer 2014, after retiring from CDS. He he continues to write, advocate, speak, and teach (including via the University of Hawaii, an online course he created, which he has taught at both the undergraduate and graduate levels–and as far as he knows–is unique), called, “Disability History and Culture: From Homer to Hip Hop.” See: http://www.cds.hawaii.edu/pages/disability-and-diversity-studies-faculty-university-hawaii-manoa

Brown’s work remains driven by the Institute on Disability Culture mission/vision: “Promoting pride in the history, activities, and cultural identity of individuals with disabilities throughout the world.”

Lists of collections on disability and books about disability

[…] The Right to Live in the World: Dr. Brown’s Recommendations for Books on Disability Advocacy […]

Disability Hierarchy is Real and It's Holding Us Back

A Short History of the Disability Rights Movement