I didn’t want to tell this story. I hate talking about this stuff – not least because it’s triggering – and not less because it feels humiliating.

So why am I telling it?

I’m telling it because I think that sometimes, the stories that I am most uncomfortable sharing end up being the ones that are the most important to tell. So (without further ado)  here it is:

I lived in Asia for 10 years. While there, I had complete health care, covered either by a combination of my employer and the state (Japan), my employer (Taiwan and China) or the state (Macau). I had full access to full health coverage, including my teeth and hearing aids.

Then I came back to the U.S. when I was around 30 years old.

When I first came back, I purchased health coverage from Kaiser, a non-profit health “corporation.” It worked; it  was fairly affordable, it was all right. Then I got my job at UC Berkeley and health was a sweet dream for a long time. Coverage there was brilliant, and best of all, a lot of it was preventative, which means that they wanted you take action towards being healthy before anything became a problem.

After I had Moxie, I quit my job.

Mikey was a bicycle mechanic at the Fruitvale (Oakland) BART station, and was covered under his employer. We tagged along under him, and let me tell you, that was NOT CHEAP. Out of our total income of some $2,000 a month, we paid over $400 in dues for insurance, leaving us – a family of 4 (nearly 5) living off of $1,600 a month in the San Francisco Bay Area (before rent).

So, yeah, it really sucked.

But then it got worse.

My brain starting spitting off depression and slathering me in it, and all kinds of bi-polar stuff started getting worked up. Compounded to that was my PTSD. Things would come to a boiling point in which I’d sit on the floor and just cry and not want to be alive anymore, then I’d scrape myself up and go see my brother Dana, who always made everything right for me again. I’d stay with him until I was even, then head back south.

I knew I needed help.

So I tried to get it – I went to Kaiser for mental health and the co-pay wiped us out. It was $120 a pop, and remember, we were living on about $1600 a month. I was literally taking food away from our table if I cared for my mental health.

I broke down at Kaiser and a psychiatrist scooped me up and arranged for a “scholarship” to have me attend the Adult Survivors of Sexual Abuse group for my PTSD (- my dad is a pedophile) – and facilitated  ongoing help for that.

I was literally going crazy with trauma.

But I will never, ever forget sitting there and trying to get through to a help line on the phone and unable to because I couldn’t hear them. The phone was non-negotiable piece of the process; I didn’t have TDD or any options for captions. I didn’t even know how to do it. I couldn’t hear them and somehow I HAD to hear them to get things arranged and meanwhile, my head was slamming me with horror and flashbacks and I could not function.

Did I mention I had two little kids I was caring for?

And I was trying to wrap my head around Moxie having Down syndrome still.

So, then… we left the Bay Area. We headed south to Mexico until my brother Dana called us back after we lost out on an investment, and we came here.

When we arrived back in California, I knew I needed steady help and I signed myself up for Medicaid.

The idea of being without access to health care or medication throws me into paroxysms of paralysis. You don’t understand – or you do if you also have triggers – this stuff gets going and I can’t work through it.

With Medicaid, I’m able to hook up with flexible work options and pay into the system. I can do things like run this blog, like teach part time at my kid’s school. I can paint and clean house and be functional.

I am a contributing member of society with Medicaid; as a social welfare program, I tell myself that I’m worth the investment of our tax dollars because I give back, I try hard, I care about others.

Yet, despite knowing that I try, that I give back, etc, I still feel that pervasive feeling of defensiveness bordering on being embarrassed. Why? I mean, why do I feel this?

I think it’s because the American culture is nothing so much as admiring of those who are hardworking and self-sufficient, and the general sense is that people who are on Medicaid are lazy and useless.

But I have been self-sufficient since, well, forever.

My brother Dana and I always found ways to support ourselves, starting from age 11, while we were living as missionaries in Fiji.

I graduated from university in 2 years, when I was 19. I worked full time while piling on classes, and left school debt-free (as Dana also did). I have always worked, and worked hard. I’ve usually had two, sometimes three jobs, and I am DEAF – I am not sure most people have any idea what went into this – constant lipreading, struggling to understand and hear and process and figure things out.

The fact that I did this stuff  is not a point of pride for me. I mean,  I struggled past points that no person should have to experience.

But I did it and I did it well. I went on and on and worked until I came to that final blocked wall after I quit my job at UC Berkeley and simply did not have the wherewithal to work, nor to pay for healthcare. I was absolutely burned out, with an exploding head.

The fact that it takes what I went through for a person with a disability (or disabilities) to “succeed” makes me angry. None of it is fair, nor is it right – most of the world enjoys free health care, provided by the state or their employers, and those countries are nowhere near as rich as the United States is supposed to be.Why then do we put everyone through the wringer with some of the most basic pieces of our living equation? HEALTH? Access to healthcare?! Why is HEALTH and CARE something that we need to prove is worthwhile, necessary? Why do we have to explain that our ears, our brains are actually a part of our bodies and they count in the “care” equation?

Trump keeps pulling through these “health care” plans that strip Medicaid of options, power, function. He keeps proposing to do things that will effectively rob millions of Americans with disabilities (and without) of viable healthcare options. For what? I don’t know. Because America is rich enough to handle (at the very least) a backbone of a program that works for health, not against it.

Read more? That would be great. 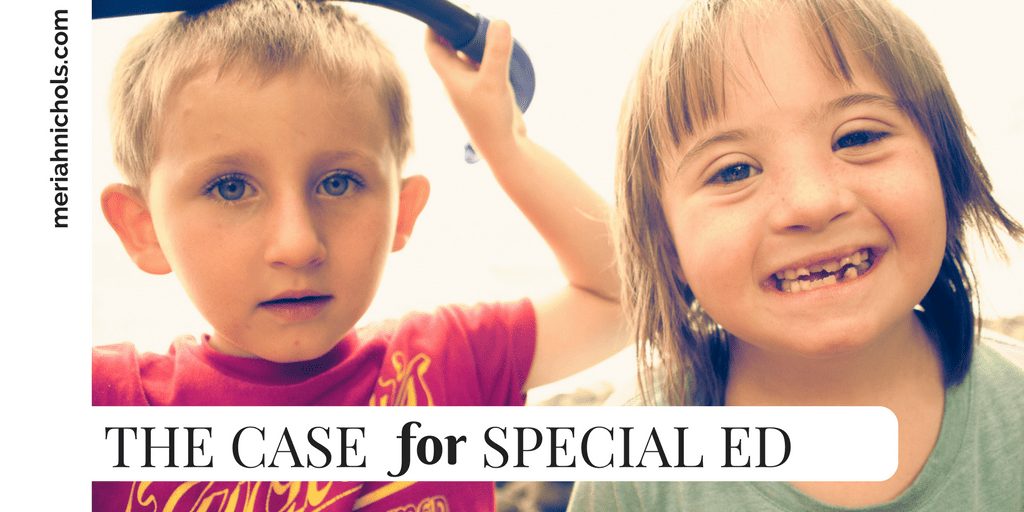 ← Previous
The Case FOR Special Ed 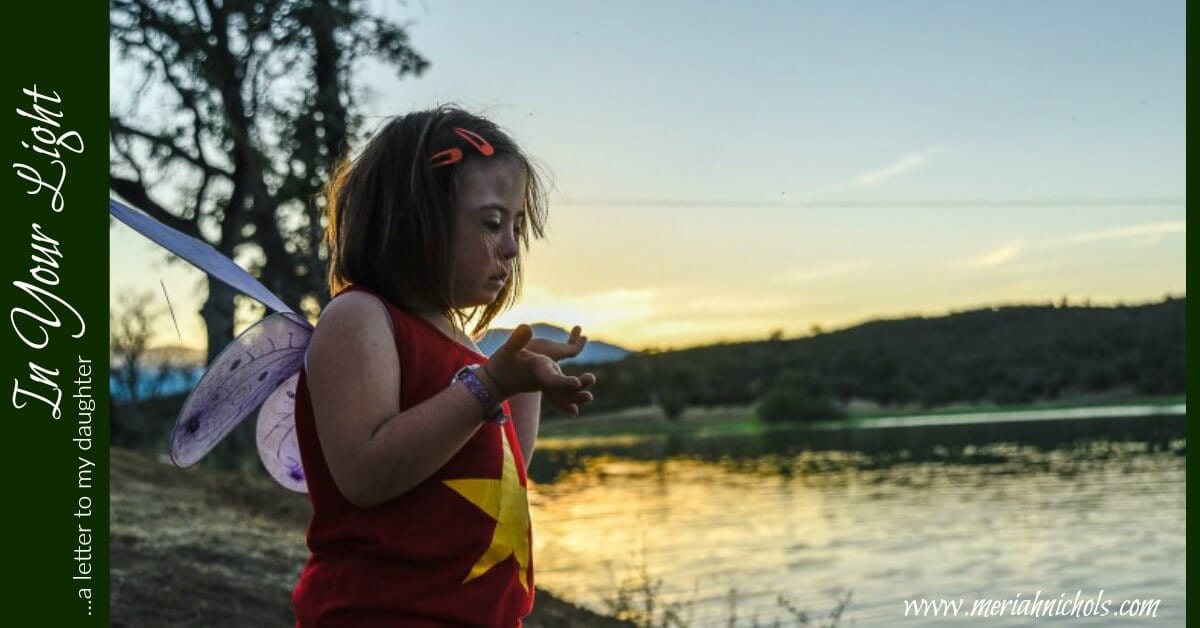 Next →
In Your Light: To My Daughter (with Down syndrome) on the Occasion of Her 7th Birthday
Click here to cancel reply.

Meriah. As someone who has dealt with the stigma of Medicaid for 17 years because of my son's disability, i have to say, never, never be ashamed or embarrassed by it. It will eat you up inside and spit you out. Instead, be thankful for the social service that is there for you. Realize that programs like medicaid were formed for the poor and disabled, so they may have their health care met, so they didn't have to worry about how they were going to get "better" or how they could have a better quality of life. That being said, please contact your senators so we have a chance of keeping this program intact.

Hi Meriah, I can so relate. I struggled for years and worked hard before finally crashing. I was then diagnosed with Narcolepsy with Cataplexy, sleep apnea, depression, and anxiety. Right now medicaid is covering my treatment for back and neck injuries that I sustained when I had a cataplexy attack and fell down a flight of stairs. I'm also caretaker to a teenager with Autism and Epilepsy. I wouldn't be able to function without Medicaid. I don't know what I would become if I lose it. Thank you for sharing your story. I guess I need to make mine public also.

Meriah, I am grateful, as always, that you wrote about your experience. It burns my toast to hear elected officials say that everyone will do fine and dandy under the current AHCA proposal. Your story shines a light on the truth.