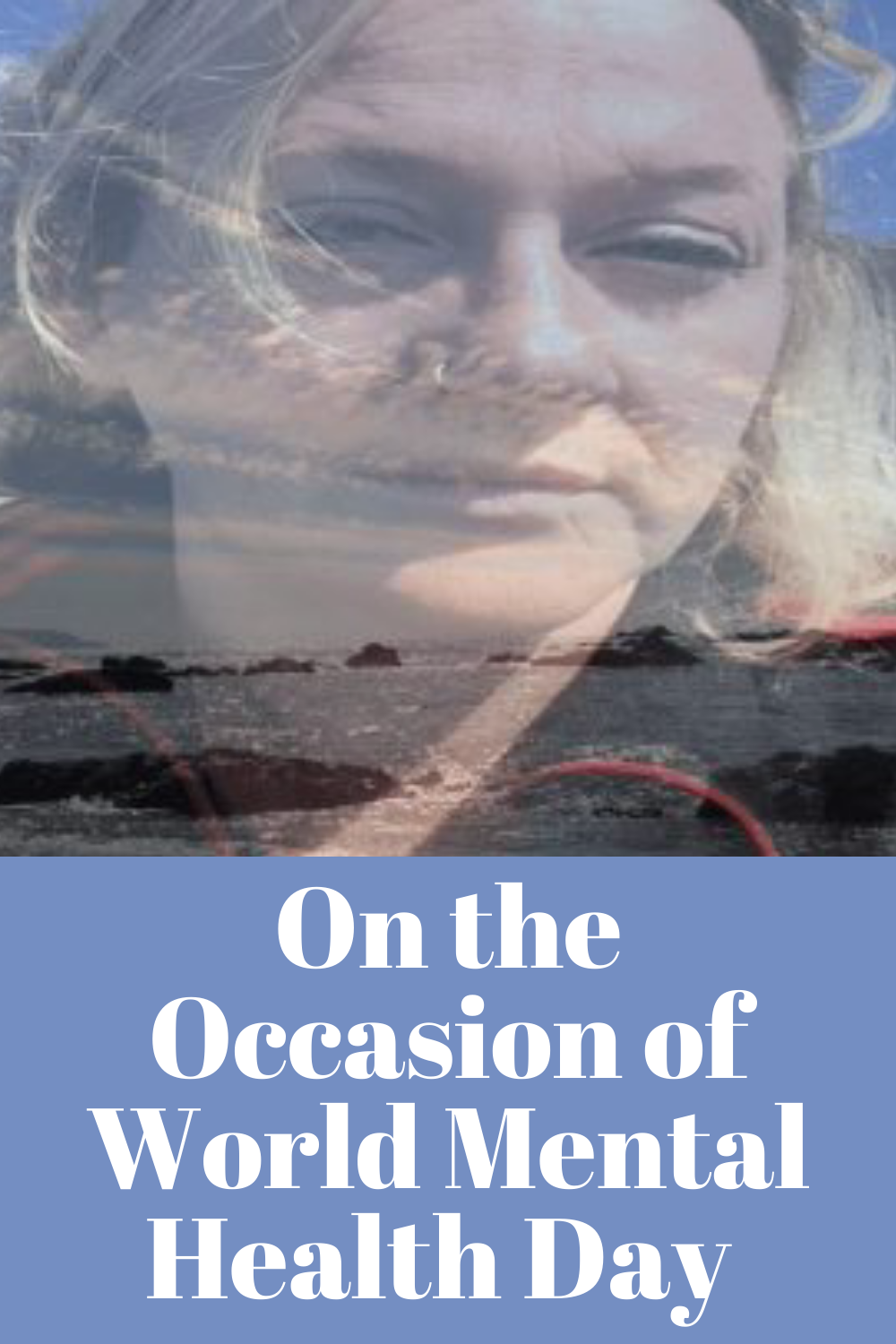 This is a personal post about my own mental health, on the occasion of World Mental Health Day.

This post was written in 2013, and many things within have changed (- I was being gaslit by my husband, for one, and did not actually have bi-polar disorder, but rather, C-PTSD). So much of this post still rings true though, so it’s worth re-posting.

Well, here we go. Another World-Something-Or-Other Day and yet another post that I really wanted to put together for the occasion isn’t written or ready. But I don’t want this day of all days, to slip by me without saying something.

You see, I’m sitting here on the floor of my brother’s kitchen right now, it’s 5 in the morning. My coffee is next to me and I’m savoring this moment before dawn, before the house awakes. I’m facing the door to the back room. The back room is where I slept with MacQuinn when I was going crazy with depression both late last year and earlier this year.

I don’t know if you remember that but I would get to the point in the Bay Area in which I was just not. functional. I was being swallowed whole and alive by that toothful whale of a monster, Depression.

And there is other stuff too.

What I haven’t told you here on this blog – but which I will today in honor of World Mental Health Day – is that I have also been diagnosed with bi-polar disorder. I haven’t wanted to talk about that because well, being bi-polar makes me crazy, right? Like, certifiable! Why would I want that out? Wouldn’t that bring my fitness as a mother, as a person, in light and to question?

I talk on this blog all.the.time about being deaf – and I do that perhaps to let out the steam that mental health keeps bottled. It’s easy talking about being deaf – and you know what? Being deaf is easy compared to sorting through and living with the cocktail of mental mumbo-jumbo going on up there. It’s easy to tell someone you can’t hear; it’s hard to say that you don’t know what to do because all you can think of is suicide and WHILE YOU WOULD NEVER DO IT because you have little kids and a husband who need you, it’s ALL YOU CAN THINK OF.

I was scared – so absolutely petrified – when I finally admitted that to my psychiatrist. He gave me lithium – and those thoughts went away. Lithium has been gold for me. It just works. Takes away the monsters in my mind.

There you have it. My mental confession.

I want to say things here that a good post would. Things like, ‘take care of yourself’, ‘it’s normal to have issues’; things about supporting each other and ourselves. About the importance of mental health. About taking time for yourself.

And it just feels like a big fucking joke to me sometimes. “Take time for yourself” – yeah, right – when?! For the average mother here in the United States, WHEN?! Before work? After? Put the kids on to the side and take some time at their expense? For a stay at home mom, WHEN?! Like I do, at the crack of dawn, and even then, it’s a choice between writing, cleaning and exercising. Should I get a job so that I can afford childcare so that I can “take time to myself”? And then, how to manage my deep fear of leaving my children to another’s care?

“It’s normal to have issues” – yeah, right, so if it’s so normal why do we stigmatize the crap out of anyone that says they are struggling? Why do people step back and their smiles become tight and fake when I tell them lithium has really helped me?

I loathe those trite and shallow self-care articles. I hate those things that make a walk out of your head something so easy as breathing – and breathing is never easy for someone who is struggling.

I have no answers, friend.

I’m just putting one foot in front of the other.

Searching for the Rainbow: Parenting with C-PTSD | Meriah Nichols

[…] On the Occasion of World Mental Health Day […]

Currently, my time for myself, when I can "sneak" away during LB's naps, is to read blogs like yours. We are the strongest when we are able to expose what we feel are our weaknesses. By doing so, you've strengthened yourself and many, many others. You're human and a strong, beautiful one to boot. Greatest of luck on your adventure!

Hugs- it's a hard thing to admit to mental illness in public and bipolar has a special amount of stigma. I know many people with bipolar and who are open about it. <3

Good luck on your journey (literally and figuratively!)

Yep i hat those self care articles too