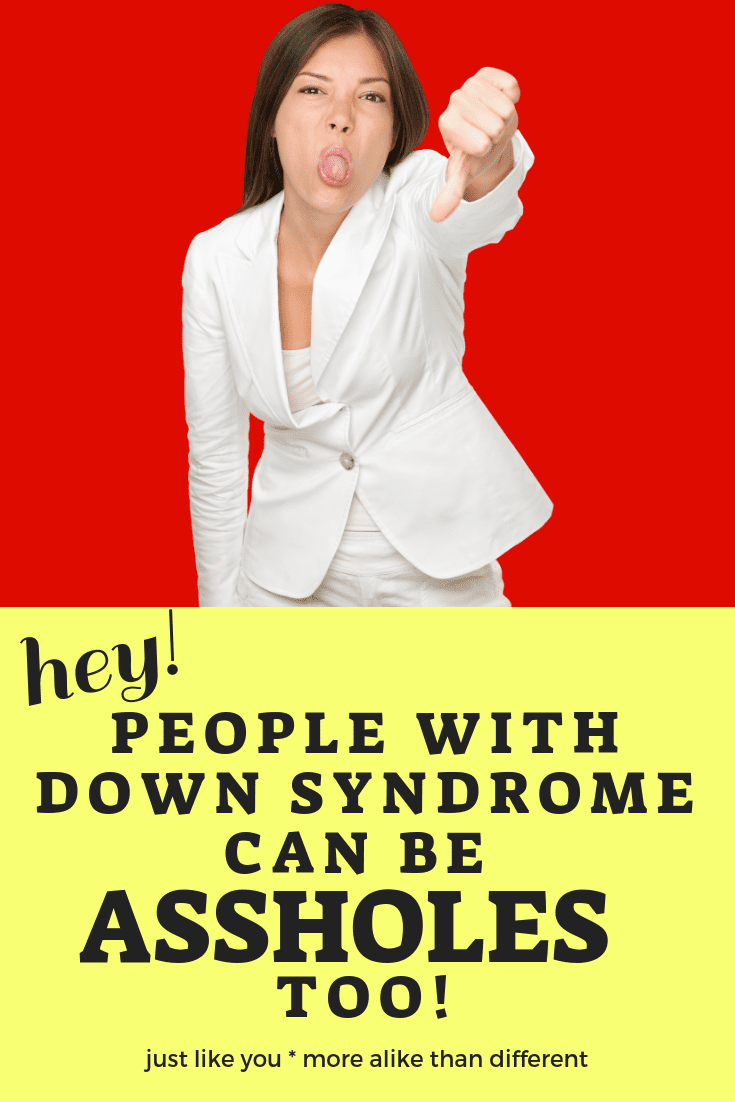 I noticed a few things floating around Facebook recently about how a lot of people think that Down syndrome is such a tragedy, but it could be worse… they could be an asshole

Some of the memes are a definite jab back at the person who was making some totally thoughtless comment like, “what could be worse than Down syndrome?‘ – um, being an asshole?!

But there are other memes or posts that are clearly about how all of these other things in life are so awful and by contrast, Down syndrome isn’t. Being an asshole is included on some of those lists, as are things like being a racist, a bully, etc.

I hate to break it to everyone but people with Down syndrome can totally be bullies too. And racists. And yes, assholes!

We can’t pick and choose how “more alike than different” they are, nor can we say “just like us!” and then say, “but only the good stuff!”

People with Down syndrome are not always happy.

And people with Down syndrome are not always nice.

I say that while thinking of my daughter who whacked her little brother on the head, shoved him and laughed when she got him to poke around in the cockroach trap.

People with Down syndrome are human, absolutely human, the good and the bad, just like all of us.

Acknowledging that gives them equality, which helps shift social attitudes and our culture of inequality with regard to developmental disability.

Now, I know there are going to be parents in the Down syndrome community who think I’m being “too sensitive”

I got a lot of backlash from my post on Down syndrome Angels. To be honest, backlash on this surprises me because:

a) the best selling book in the Down syndrome community is, what? “Those Angels of Ours”? Nope. It’s Supporting Positive Behavior in Children and Teens with Down Syndrome: The Respond but Don’t React Method .  We KNOW they don’t act like angels all the time. We KNOW they aren’t angels! We KNOW they are completely human, often-times really difficult kids!

With all of this absolutely known by all of us, wouldn’t it make sense to try and figure out the root causes of our cultural beliefs regarding Down syndrome?

Doesn’t it make sense to consider the language we use regularly and see if it’s a contributing factor?

We know that people with Down syndrome are infantized. We know that society keeps them in a perpetual state of childhood. So, why are we taking away their right to be a normal adult by keeping them in a an “angelic” state with the language we use?

People with Down syndrome are not angels.

They are human, which means that they can also be assholes.

Not An Angel T-Shirt

Human Needs Are Not “Special”
by MN
i'mperfect

It’s An Extra Chromosome, Not a Halo! T-Shirt

Up Syndrome ( a Memoir by a Woman with Down Syndrome)

Life with a Superhero (a Memoir that begins when Michael is a baby and ends when he is an adult, by a college English teacher)

The Shape of the Eye: A Memoir (by a Poet)

What People with Down Syndrome Are Tired of Hearing You Say!