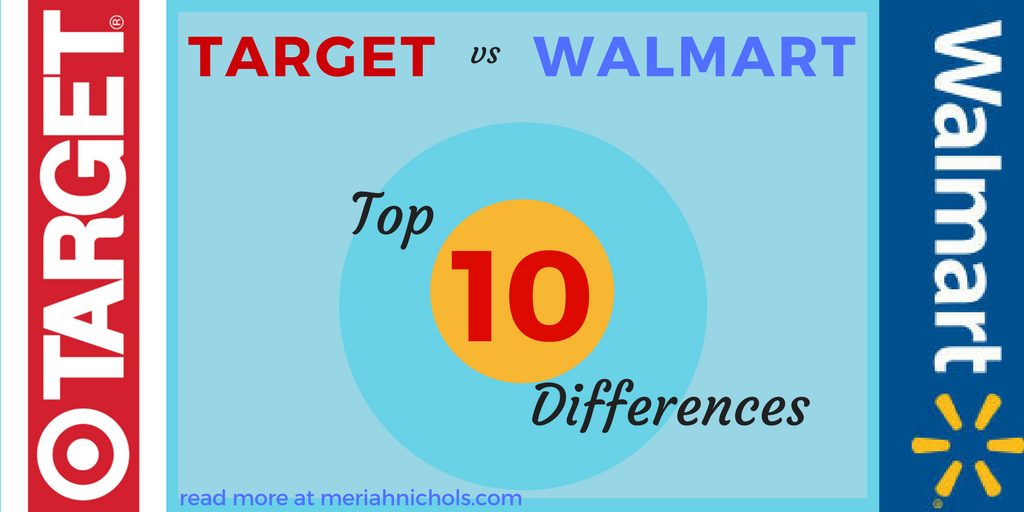 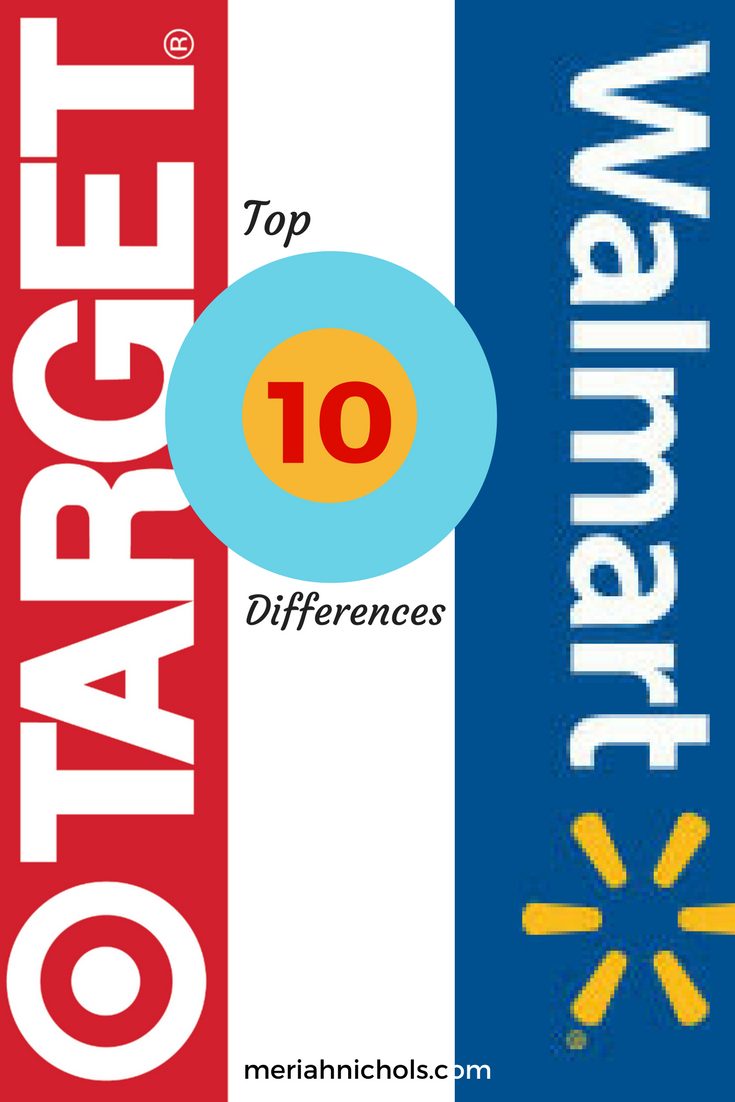 I went to Walmart the other day. I needed something in the way of popsicle sticks, I knew they’d be open,  and I knew they’d have them.

Now, I don’t know if it’s just my local Walmart or if it’s all Walmarts, but the difference between Walmart and Target smacks me broadside every*single*time I walk through Walmart’s automatic doors and past their “greeters” (who, judging from the way they “greet,” either operate as prison guards or participate in sleep studies in their off hours). To be fair, it’s not like the Target “greeters” in my area do a whole lot of cheer-spreading either though – they mostly look like they are just itching to get outside for a smoke with their buddies – or catch you using the wrong cart or something.

So, what is the difference between the two? I mean, they seem to cater to the same big-box, one-stop-shop-loving crowd, right? I thought about it a great deal and this is what I’ve come up with in the way of nailing the differences.

While the prices are right about the same, the quality of clothes in Walmart bellow I WAS MADE IN CHINA with a force usually reserved for moving people out of the way of a fire.

The people in Target look really put out when I ask them a question – usually needing to interrupt coworker chats to do so. They also usually don’t know the answer to my question. Walmart staff on the other hand, do. And they are happy to tell me – even lead me to wherever it is I need to go. “Greeters” aside, I like the staff at Walmart a lot more. Plus, they usually wear things like outrageous false eyelashes neon-bright eye shadows and such that really crack me up.

The fluorescent lights in both places wreck havoc with my brain, but of the two, Walmart’s seem dimmer. That’s usually a good thing, but in this case it isn’t. They appear dimmer in a poorly lit, low budget, seedy kind of way. I feel like I need a shower after shopping at Walmart.

There is no question that the arrangement of goods at Target is much more pleasing to the eye than at Walmart. None at all. The lighting is better, the goods are arranged in fetching displays. The aisles gleam, the wares call your name in soft, glimmering tones.

Here, for example, is an aisle at Target:

And here is one at Walmart: 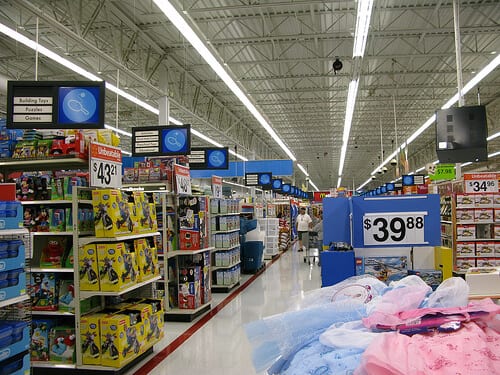 I think it’s all the red, personally, that makes Target’s that much better.

Target has switched to plastic carts that are delicious to roll around. Smooth like silk, they glide all over the place. Walmart, on the other hand, has archaic carts that cling to one another like terrified bits of velcro. Target has tons of carts that accommodate more than one kid; I usually have a hard time finding any carts at all at Walmart, let alone one that will carry more than one parcel of offspring. Target also has “Caroline’s Carts”, which are made for kids with disabilities… which is a huge deal for me as I need that.

I said above that the prices are right about the same, but I have actually found Walmart to be the more expensive of the two. This pisses me off because it’s apparent that some really poor people shop at Walmart thinking they are getting the best buy.

The food sold in both places is pretty awful but of the two, Walmart’s is way worse. Worse quality with same or more expensive prices. Only the non-perishables looked safe-ish to me.

Target has fun clothes. They’ve got ASL shirts, “Kind is Cool” and their clearance racks always have good stuff.

Added to that, Target has the Adaptive Clothing Line for kids and adults with disabilities, which I LOVE SO MUCH. (my post about it is linked here).

In the stores in my area, the people who shop at Target tend to be smartly clad, rather fashionable. Lots of people of color and/or white people who look well educated. A lot of the same type of (upper) middle class kid accessories (ergo baby carriers, BOB strollers) and Dansko-shoe-wearing Moms. You know the type. Cars in the parking lot are Prius’s or Odyssey’s with a few Civics, Corollas and Lexus thrown in. Lots of Toyota represented.

Walmart in the Bay Area, on the other hand, has more people of color and not as many white people. Their parent-gear looks more like gear on a budget – their strollers are the flimsy umbrella type of Graco snap-n’go’s. The cars in the parking lot? Mercury’s, Neon’s, old Aerostars. American.

I very much prefer the people at Walmart. The other shoppers there make eye contact with me, say hi (often – excitingly – in other languages! ). They are friendly and move their carts in a considerate manner. They don’t seem as utterly self-absorbed as the shoppers in Target. Maybe that’s also a Berkeley/Oakland difference, I don’t know. 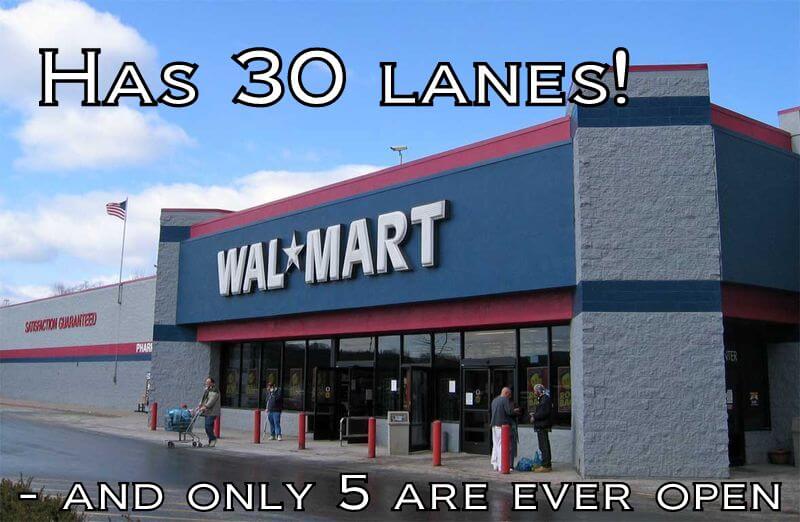 Target staff push you through those lanes like they are just *dying* to get outside for a smoke (and I’ll bet they are); Walmart staff wants to make sure they have interacted with each and every customer – and each and every item being purchased – and each and every bill being presented – as absolutely thoroughly as humanely possible. This can take time, but it doesn’t seem to bother people much, who have to wait around 30 minutes in the “express lane” for 2 or 3 items that they’d like to purchase.

11. Emblematic of the difference between the two: Target/Walmart meme-stuff online.

People don’t really hate Target. People really, really hate Walmart. Both are ultimately big-box stores that are crap for the environment and don’t care for their employees nearly enough.

But a run-down on comparing Target and Walmart in the San Francisco Bay Area:

Target has a fantastic online shopping experience set up.

I buy most of my kid’s clothes there – it’s nice stuff and discounted, it’s incredibly cheap, and has the “kind is cool” and t-shirts in ASL that I like. I buy most of my own clothes from Target as well, as it’s just easy. For craft stuff, I go to Walmart. I try not to go to either for food, but in a pinch, I’d lean towards Target as they have more of a selection of organic and healthy foods.

But I still like the people at Walmart better.

53shares
← Previous
Evelyn Glennie: Hearing vs Listening
Next →
Published on Mamalode: "Be Not Scared"
Click here to cancel reply.

i work at walmart as a cart collector and im here to tell you about 85 percent of walmart customers are lazy and self entitled . These people leave their carts all over the lot instead of putting them in the corrals which are not too far from their cars . There is a time of day where there will be no carts in the store and these people will stand there in line like a bunch of cows and wait for a cart and complain instead of grabbing one out in the lot near their car. Sundays is the worse , its like these people have no life or nothing better to do on a sunday but come to walmart and make pain in the behinds of themselves , and , yes associates are miserable because the company treats us like crap , there is no healthy customer / associate balance because walmart cares more about the simpletons that shop there than the employees . ON my days off when i have to shop , i go to publix for food and target for other things or i just get it off amazon

I cam agree that WalMart has a less nice appearance but has to do with that company and not the people that you call poor. Famous people still love and shop at Wal Mart. Target is not a store that is looking for a Black audience( I'll say). I can complained so many times about the selections and having things that look like myself and my daughter. Without going to deep, I think Target is for a different crowd and they are really discriminative. I wont shop there for these reasons. I know that basic white person wouldn't see these things because it doesn't effect them. I mean that in the nicest way too.

Just an FYI... if the people of color as Black people, WE DONT LIKE THAT. I know that older people cant get over that but its still a fact. Thanks, have a great day.

I don't shop at Target for one simple reason:

You pay an extra 5 percent on everything in the store if you don't use a Target credit or debit card.

I hate shopping at Walmart. Everytime I go there I curde the check out lanes. And truly, I don't know which is worse the low life cutomers who take all day to pay or the slower the dead clerks.

Getting a perscriptions at Walmart is the absolute worst expereince and I can't blame this on the cutomers. The process is pathetic.

If there were a Target/Walmart side by side, and they both had what I would needed I wouls never step foot in a Walmart simply due to Walmrt's check out process.

I won't by meat at either store and do not find either one to be any better stocked.

Target's electronics and automotive should just be done away with. They have been downsized to the point they are useless For automotive needs lile oil, filters and wipers, Walmart clearly beats Target. Also Target, is clearly lacking in lawn and garden.

At the end of the day, I do everything I can to not shop at Walmart simply because of their checkout lanes.