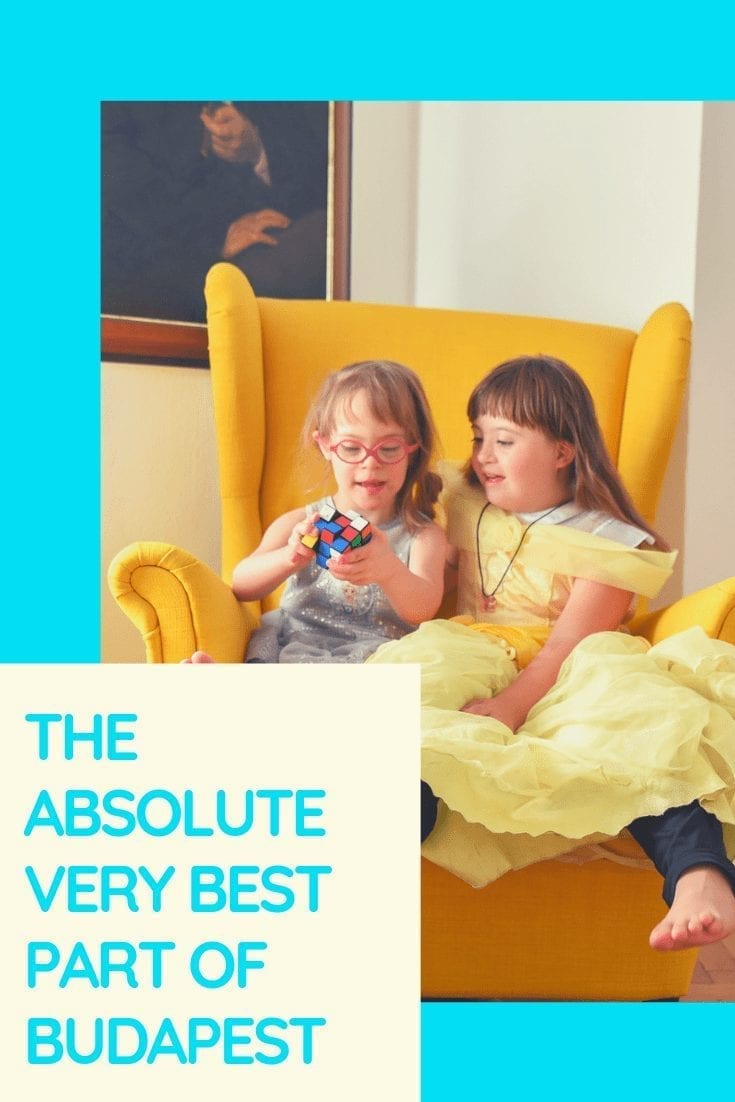 This is a travel post about what we loved the most about Budapest.

While seeing sights and understanding the physical in another space is part of traveling, the entire experience of travel is much deeper than that for me.

For me, travel can be the transformative element, a way to converge thought, experience, serendipity and be thrown up against the Universe – all woven in magic.

In that, travel can be the best of the best, the most unreal, exquisite meeting of people who you have always wanted to know (or have known in another life?) through serendipity, it can be having to interact with people you would be glad to have never known, and then needing to resolve it all within yourself. It can be the allowing of magic to happen. 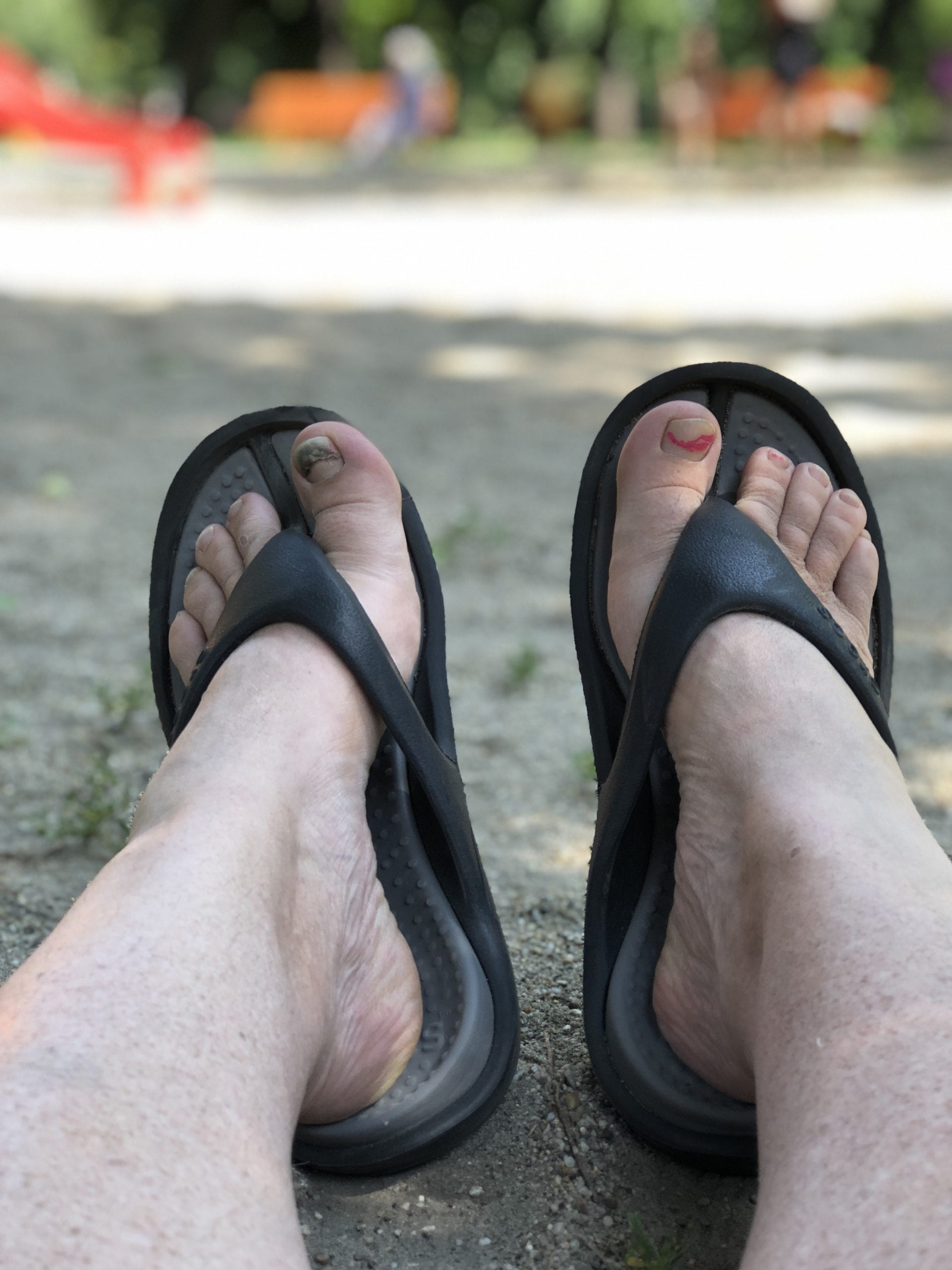 yes, my feet were made for tilling land

I sat there in the playground outside of Szechenyi baths that day.

Moxie really wanted to play and the boys were happy to run around. I was glad initially to just rest a minute, but after a while I grew bored.

I even took a picture of my feet stretched out as I sat on the ground, with all their chipped-nail-polished and hurt-toe glory.

I had the sense that I was waiting for something.

I had no idea what or for whom or anything: just the sense that I was waiting.

I looked around and then I caught sight of a little girl who was dancing/walking alongside her father, and as I looked closer, she seemed to have some characteristics of Down syndrome.

I got up and walked over to them as they approached the other side of the playground, only when I was standing directly in front of them did I realize that I didn’t have anything to say – I had just been drawn to walk over and meet them.

Luckily, the father didn’t seem to think it was odd that I was standing in front of them, and luckily, Moxie had just come over at that moment, so everything made sense. The little girl did indeed have Down syndrome, and Moxie and Panka took hold of one another as immediate friends. 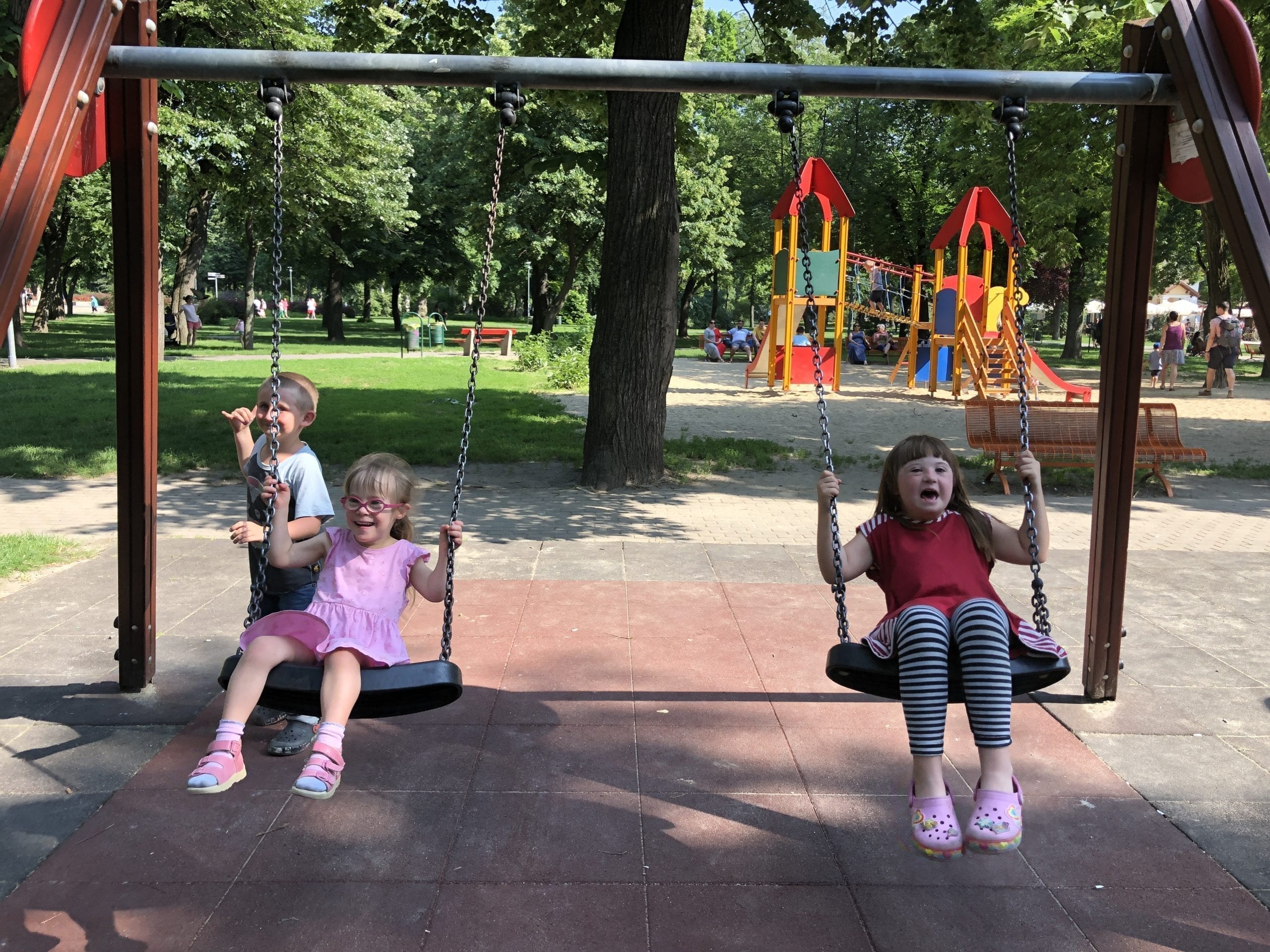 I want to say that this is not a typical “Down syndrome thing”!

Moxie is not immediately drawn to any and all children (or adults) with Down syndrome. She likes who she likes and I don’t think Down syndrome has much to do with it, really.

Well, she sure liked Panka!

And the feeling was evidently mutual.

After walking around the park together, and then when Panka’s mother and sisters came to join them, they invited us to their church and house the next day. 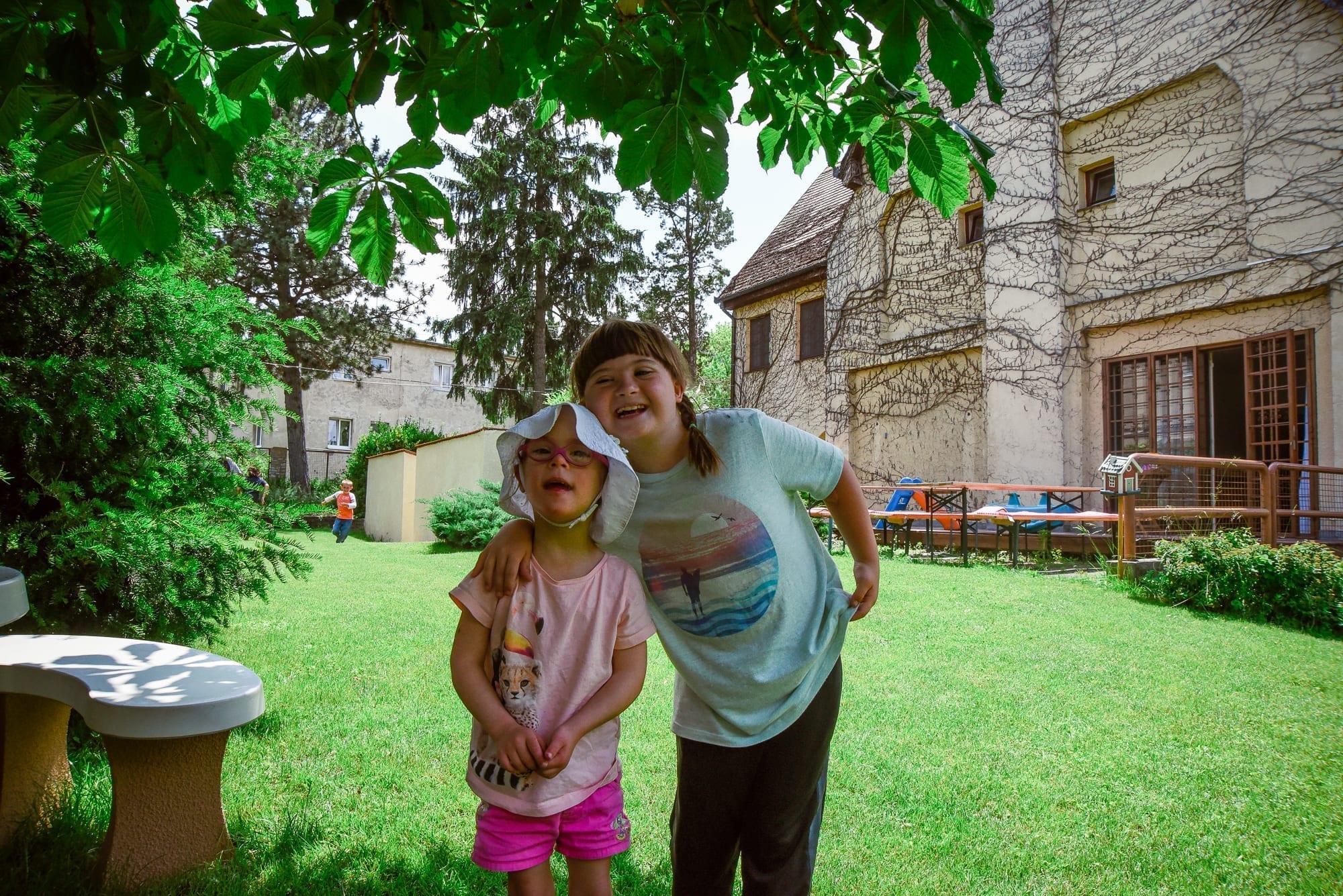 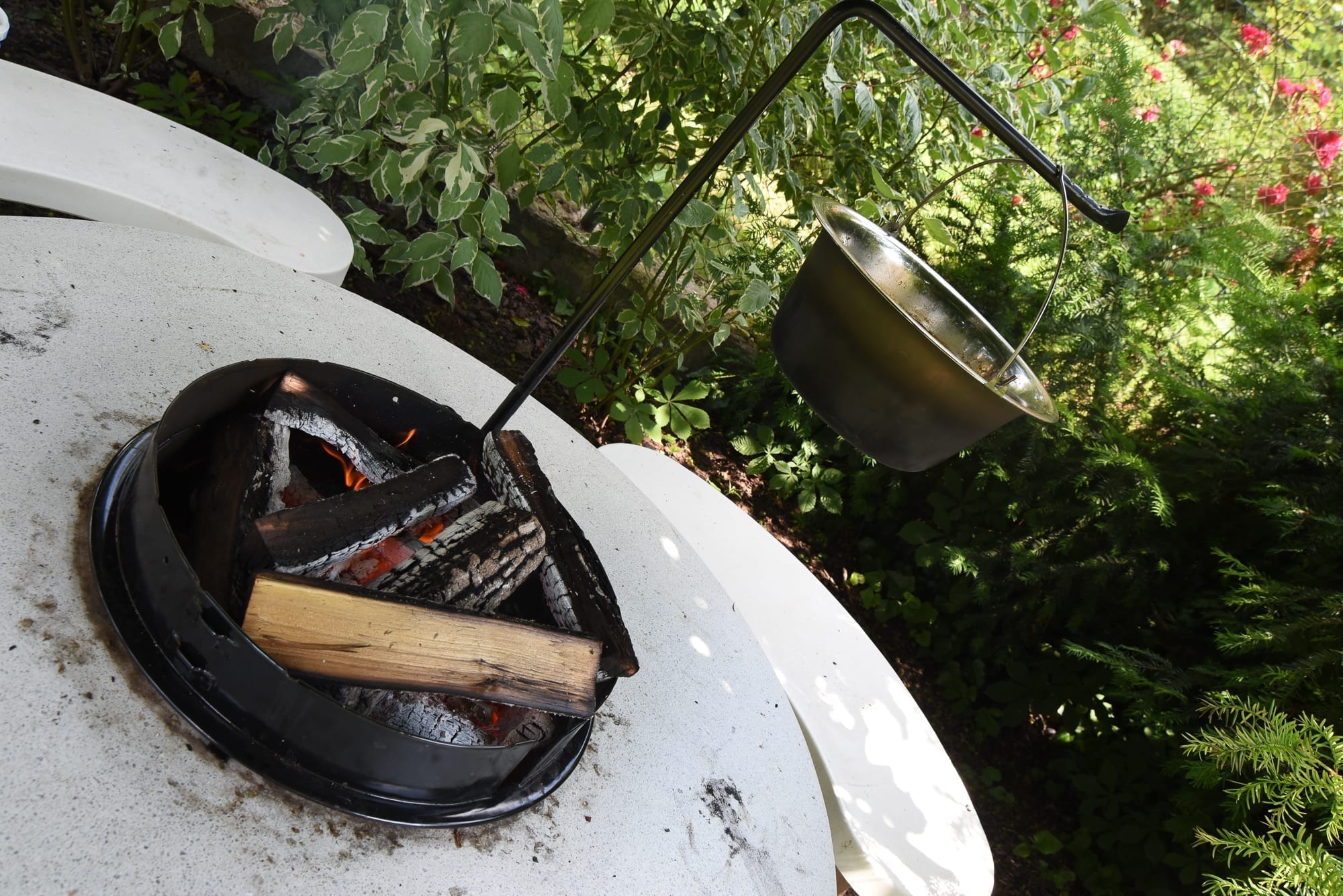 Panka’s dad Zoltan whipped up a fire on their outdoor stove and created some traditional Hungarian stew for us all (- with sausage, onions, potatoes, spices) which we soaked up with bread, cucumber salad (with sour cream?) and lemonade and it was all so beautiful. 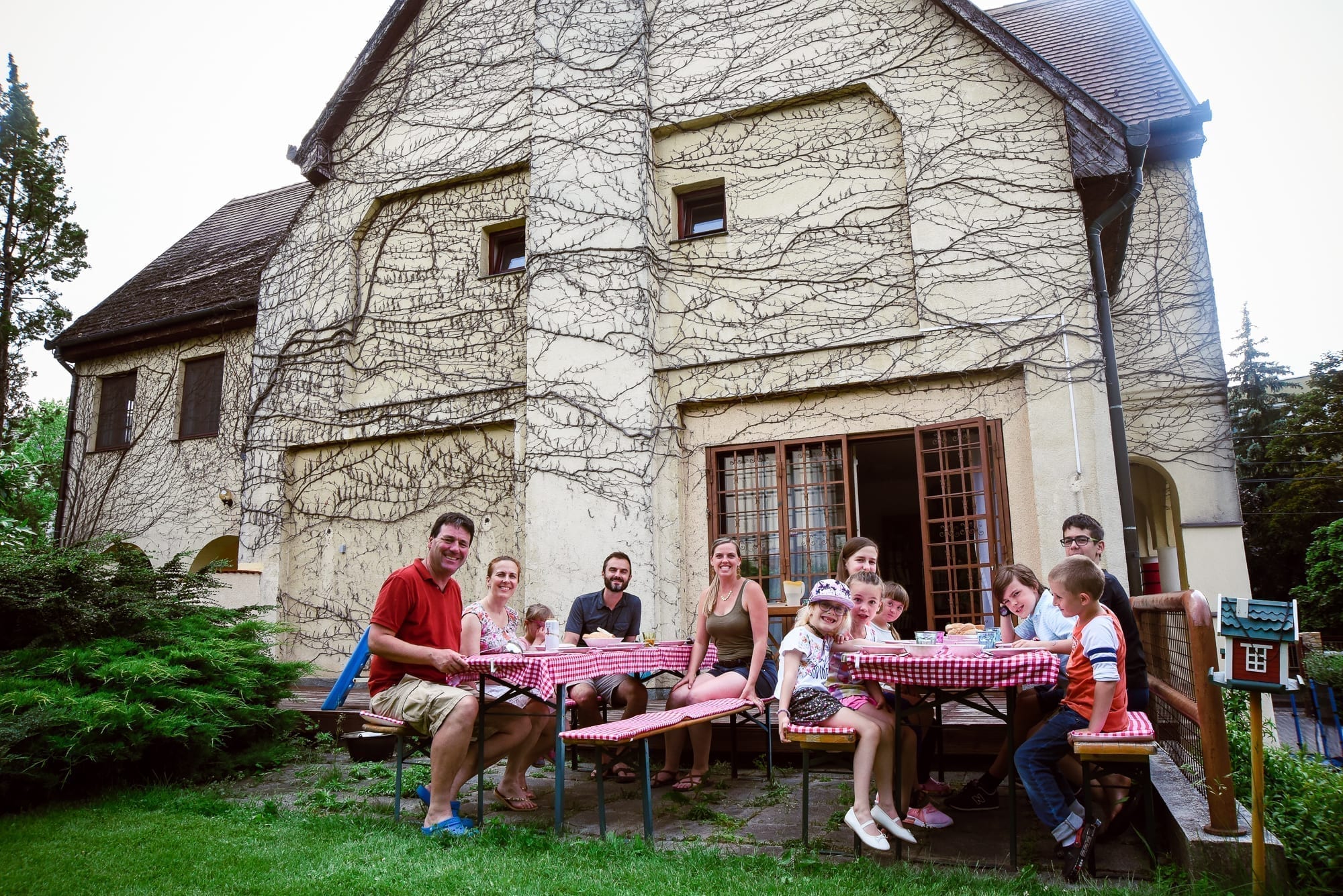 I really liked their family. 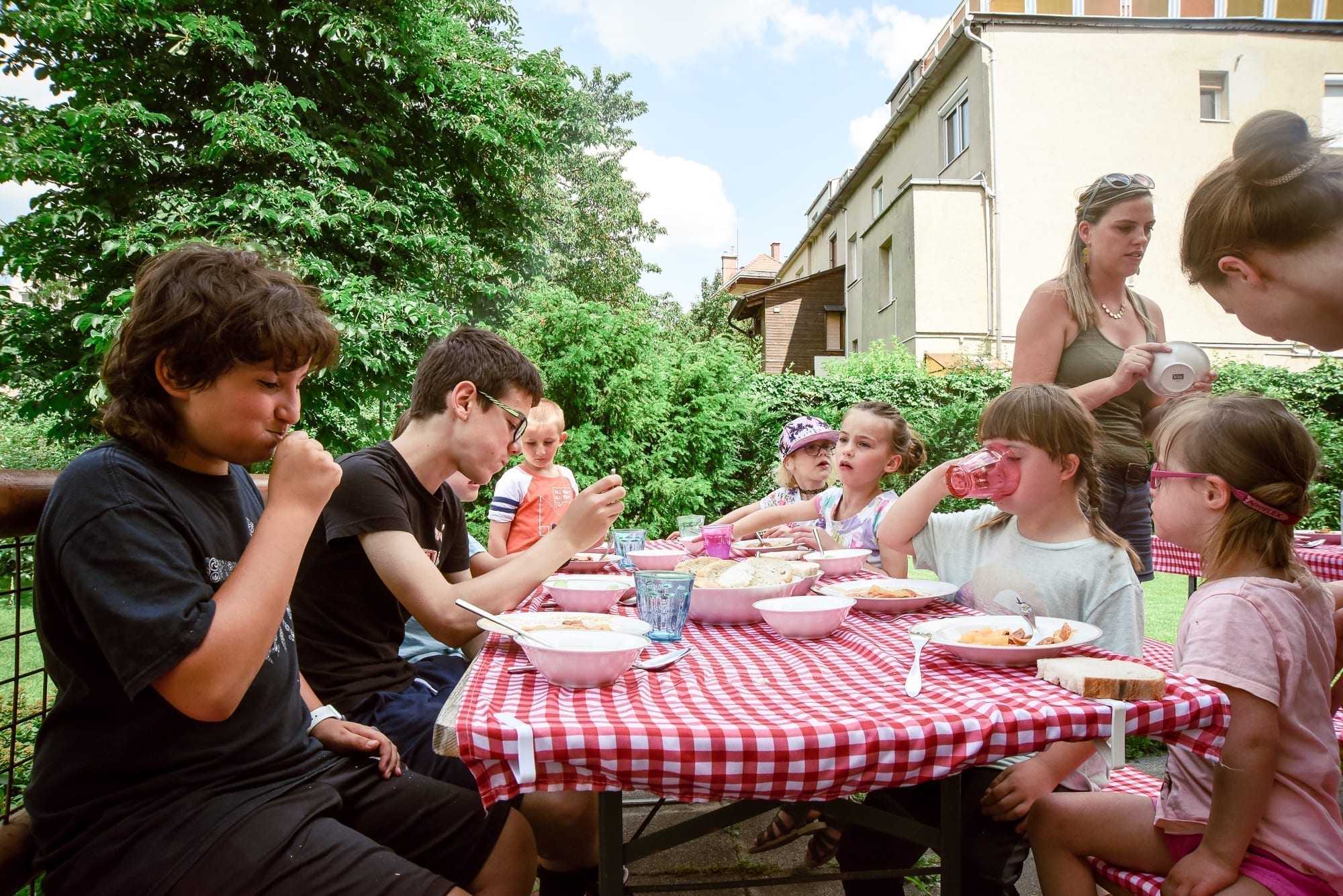 Both Zoltan and Krysta (- Panka’s parents) are active in Christian spiritual revival in Budapest.

That means that Christianity is a living, breathing part of their lives. I enjoyed hearing their story and about Christianity in Budapest and Hungary in general. 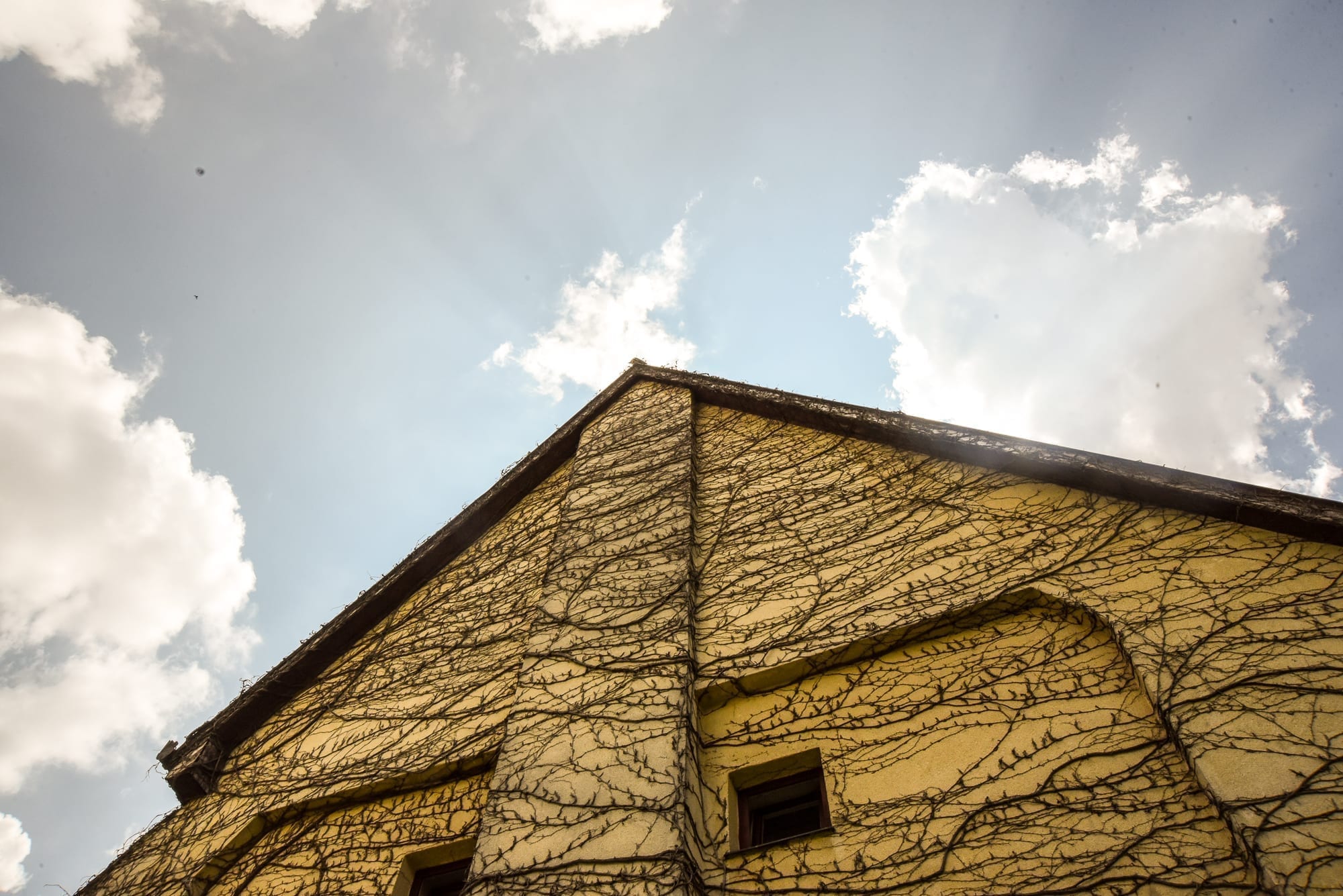 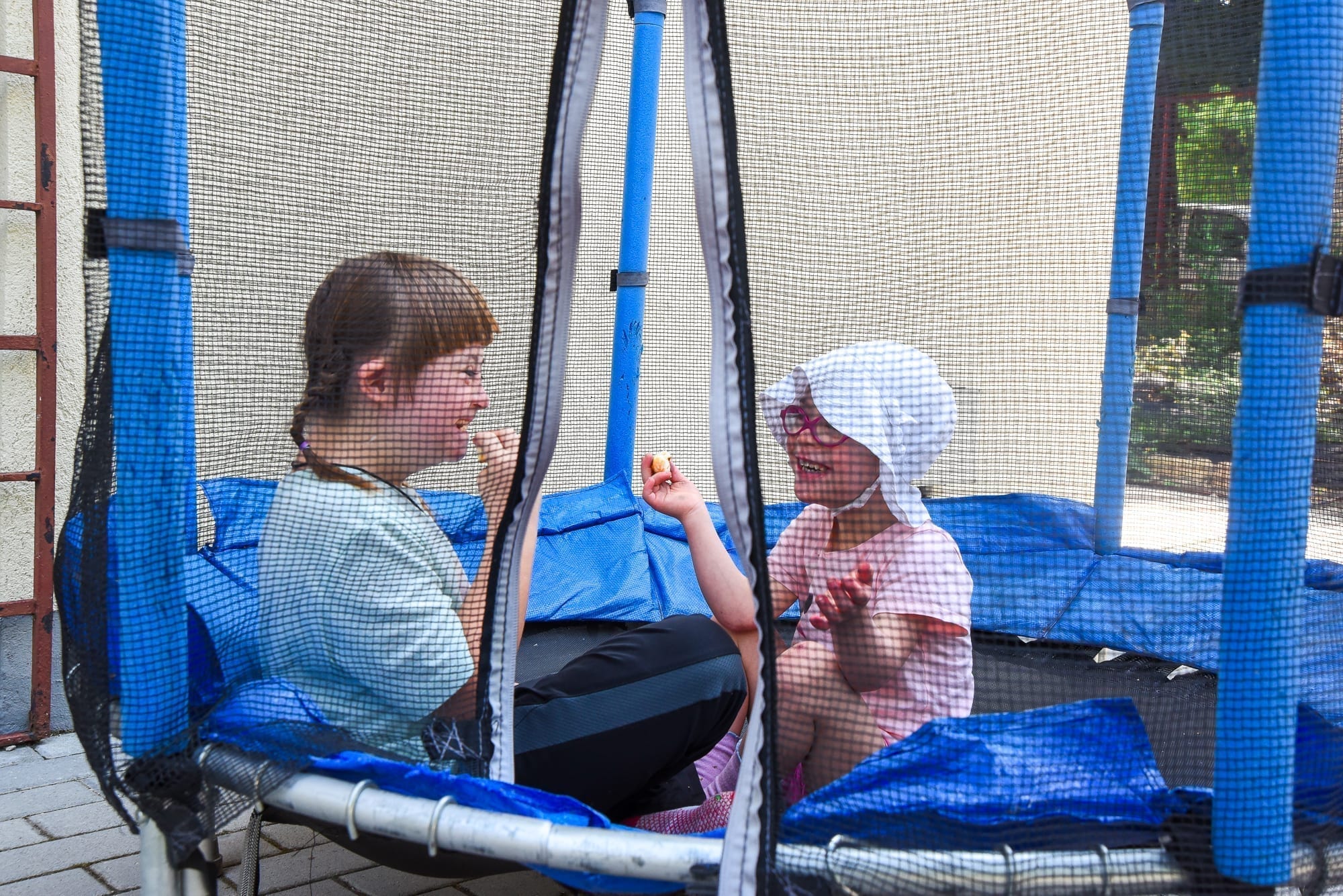 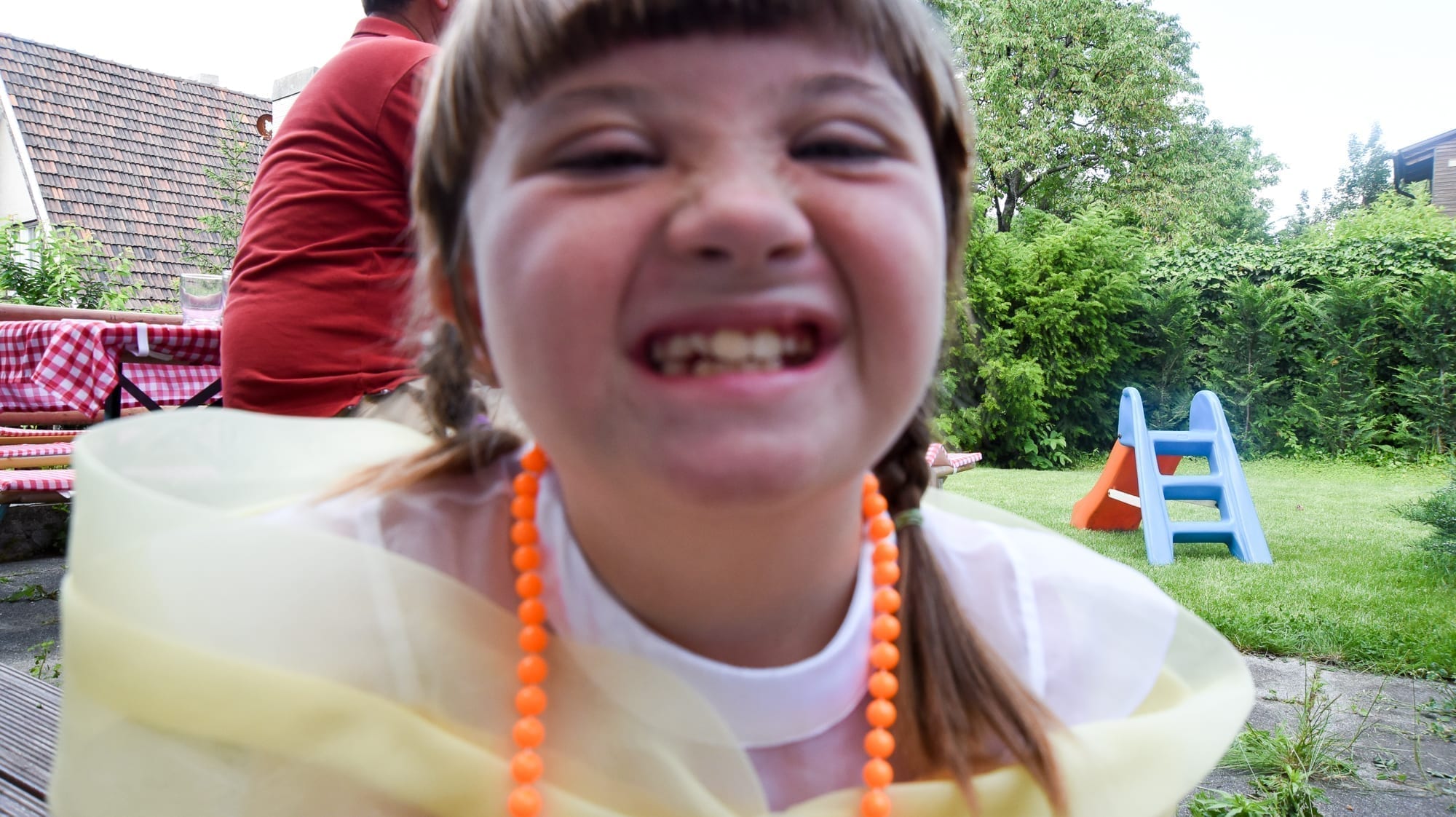 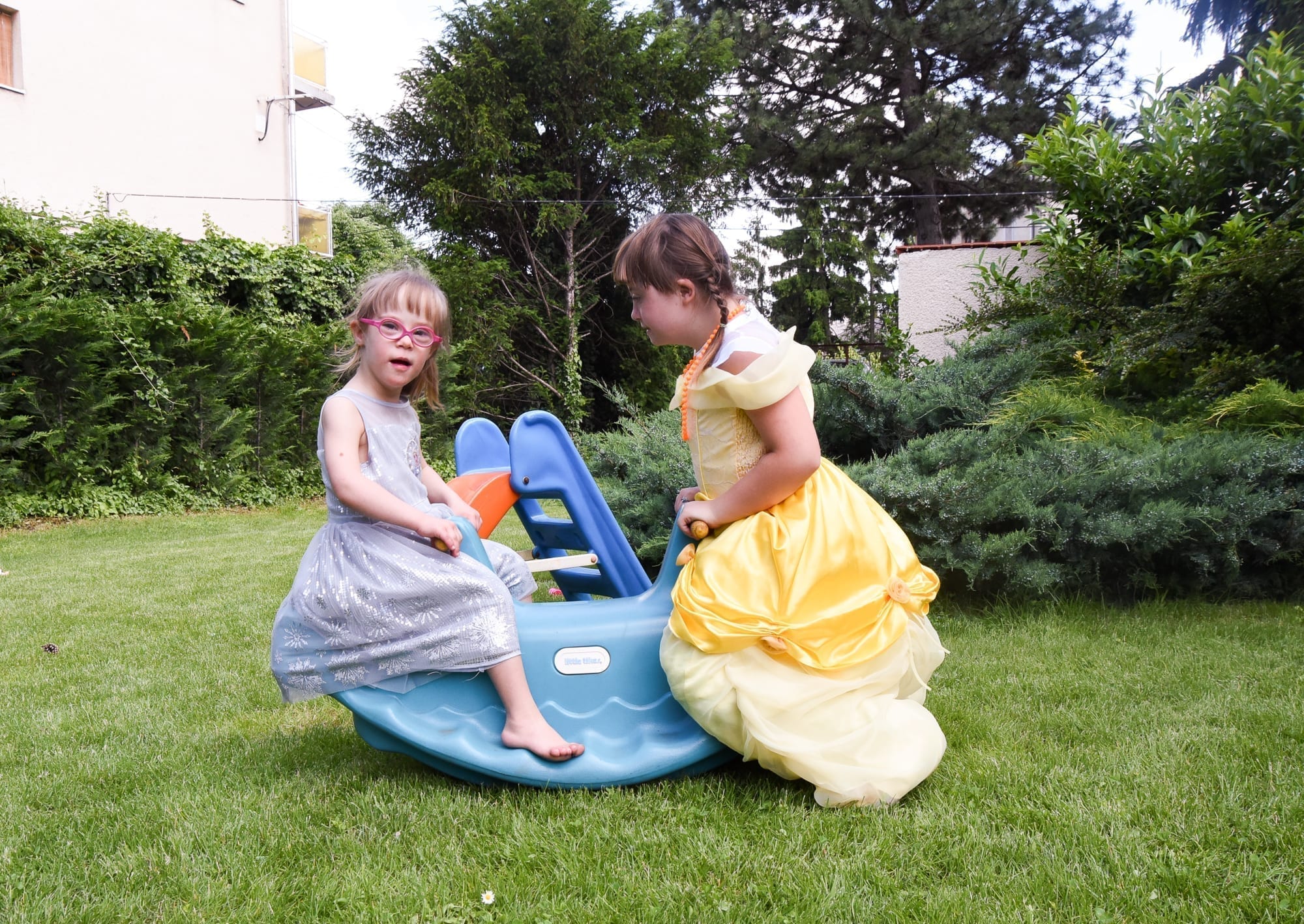 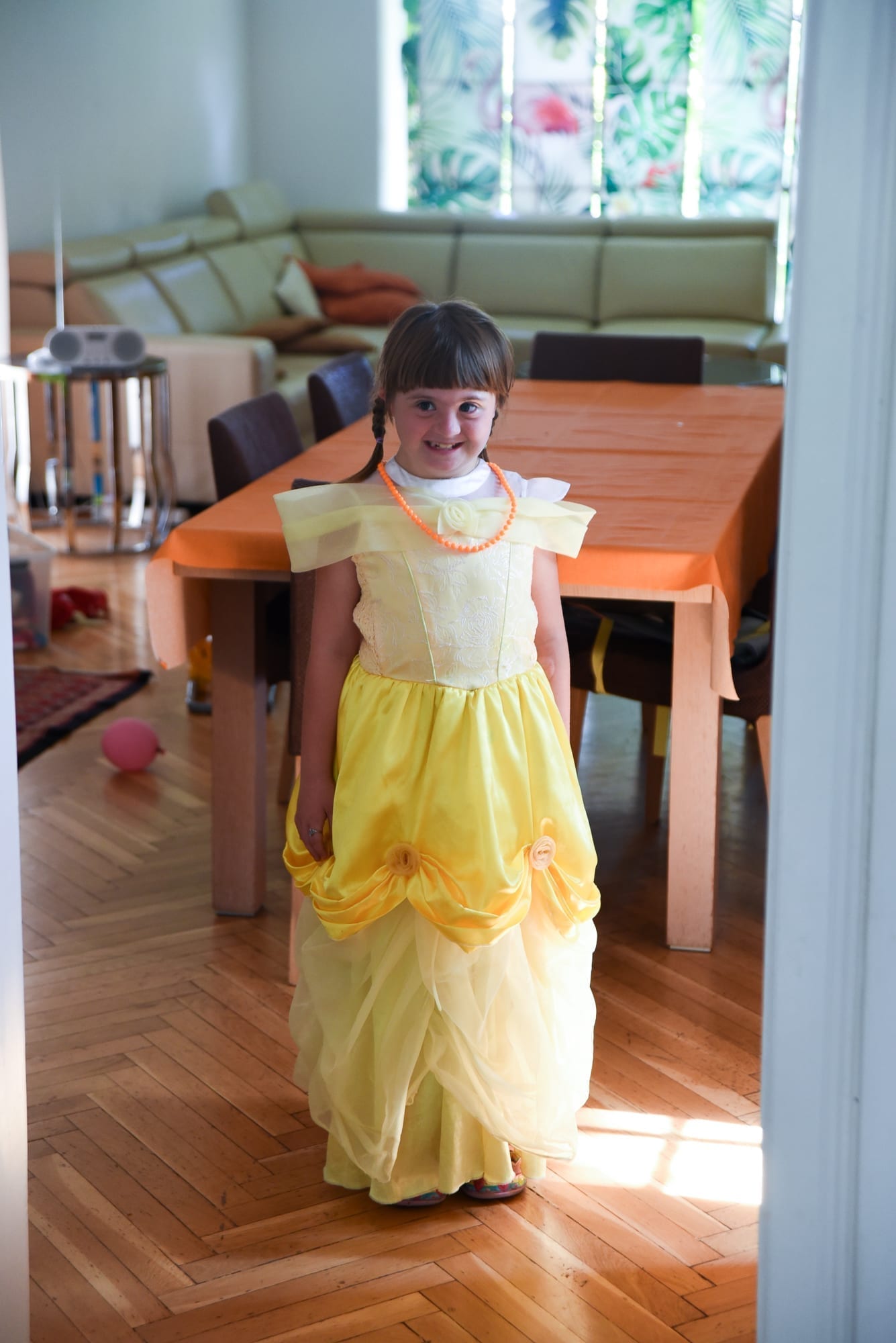 Two peas of a pod.

They were instantly drawn to each other and fast friends.

Panka let Moxie wear her Belle gown and Moxie was on cloud 9 between that and being able to play all the things she loves with her new friend. 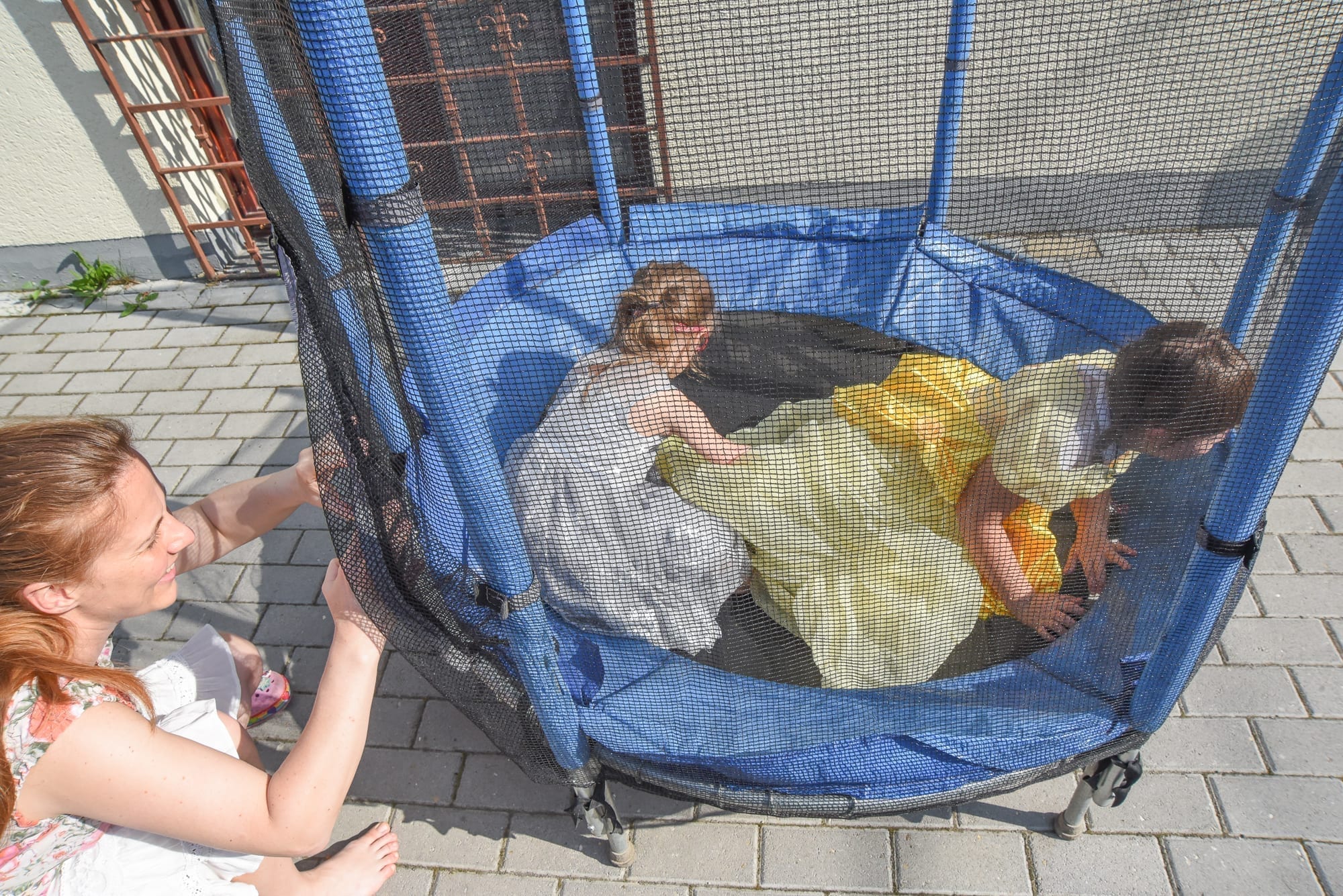 The State of Down Syndrome in Hungary

I got to talk with Panka’s mother about the state of Down syndrome in Hungary. I was so curious about it all not least because Hungary is close to the Ukraine, and I know people with Down syndrome are still institutionalized there.

I was wondering if the same thing happens in Hungary. 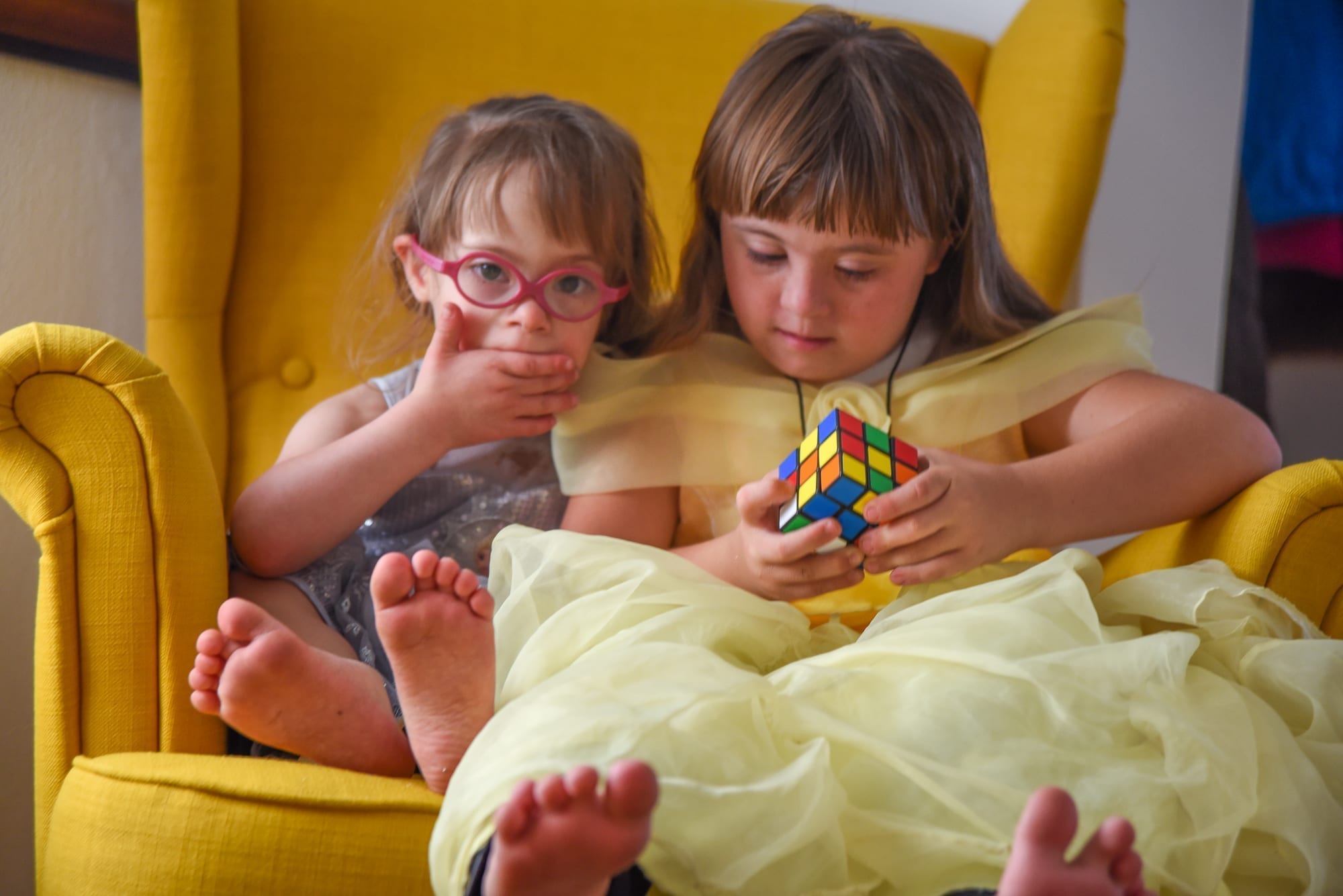 Krysta said that Down syndrome is not as castigated in Hungary as it is in the Ukraine. 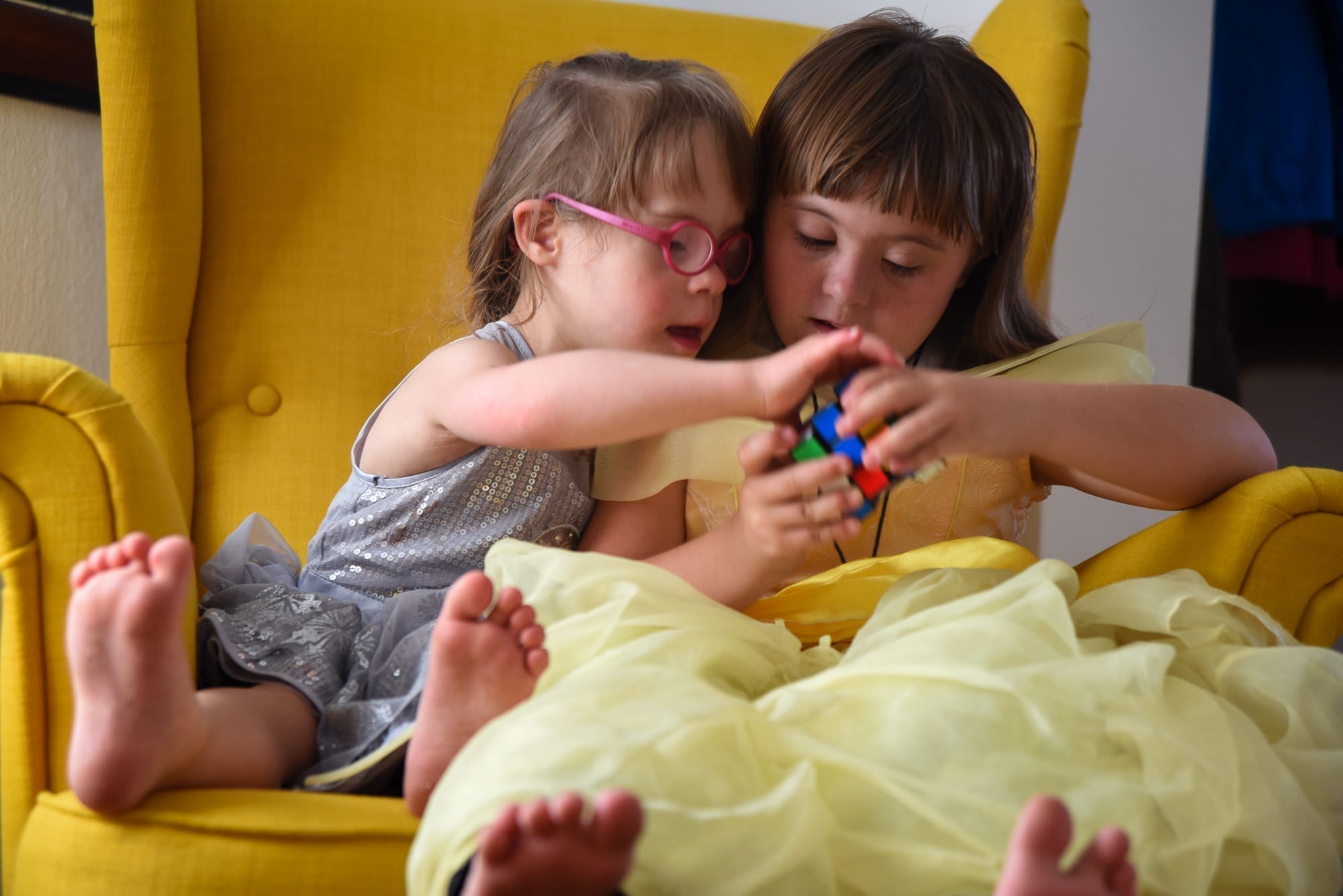 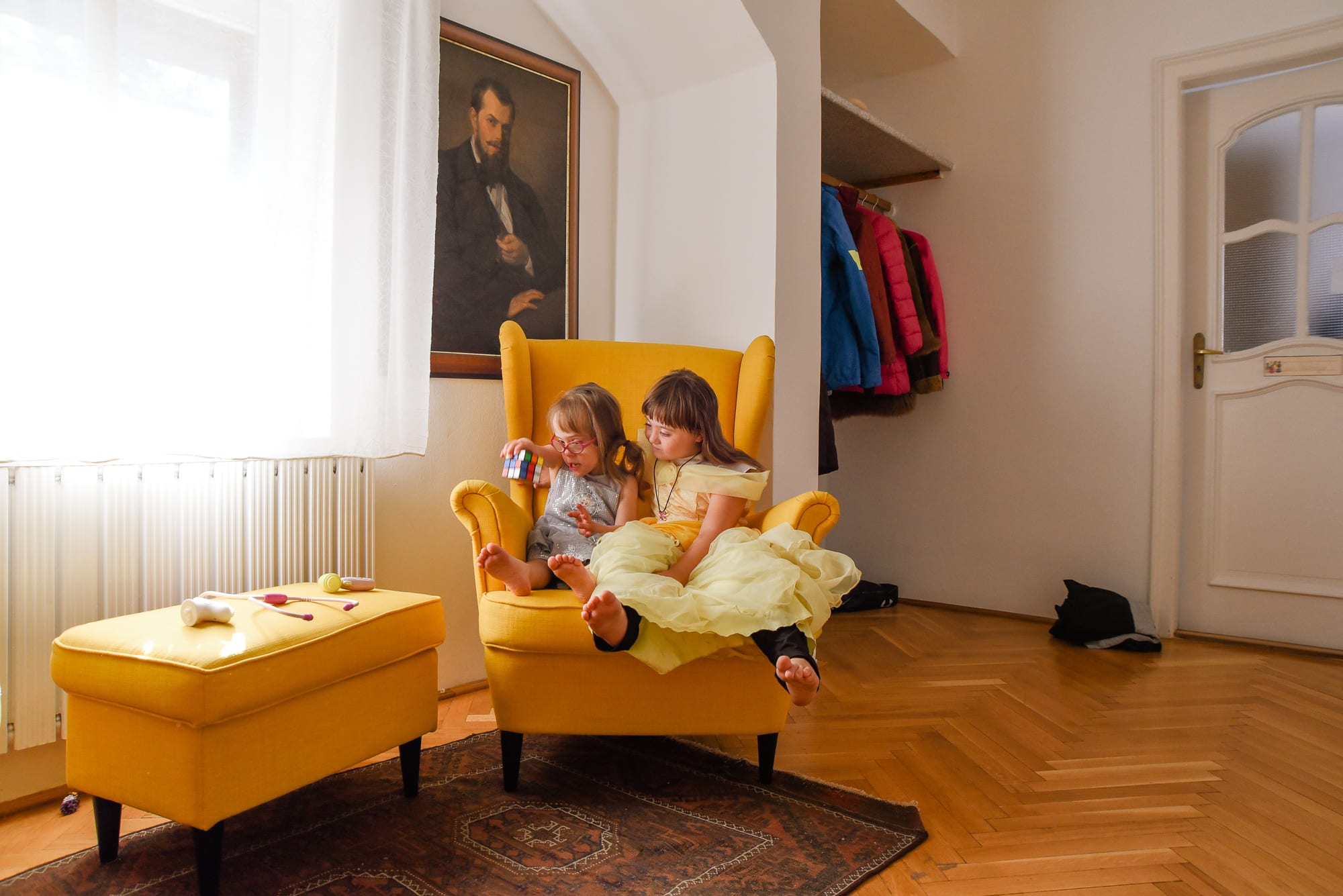 Schools are absolutely segregated though.

Panka’s parents wanted her included, but the only way they can presently do that is to send her to a private American school. If she attends a Hungarian school, she will be in a separate school for kids with disabilities.

I do know that we were all so happy and grateful to be able to talk with Panka in English! And that she is incredibly fluent in both languages (her language skills remind me of Moxie’s friend Nava in Laos). 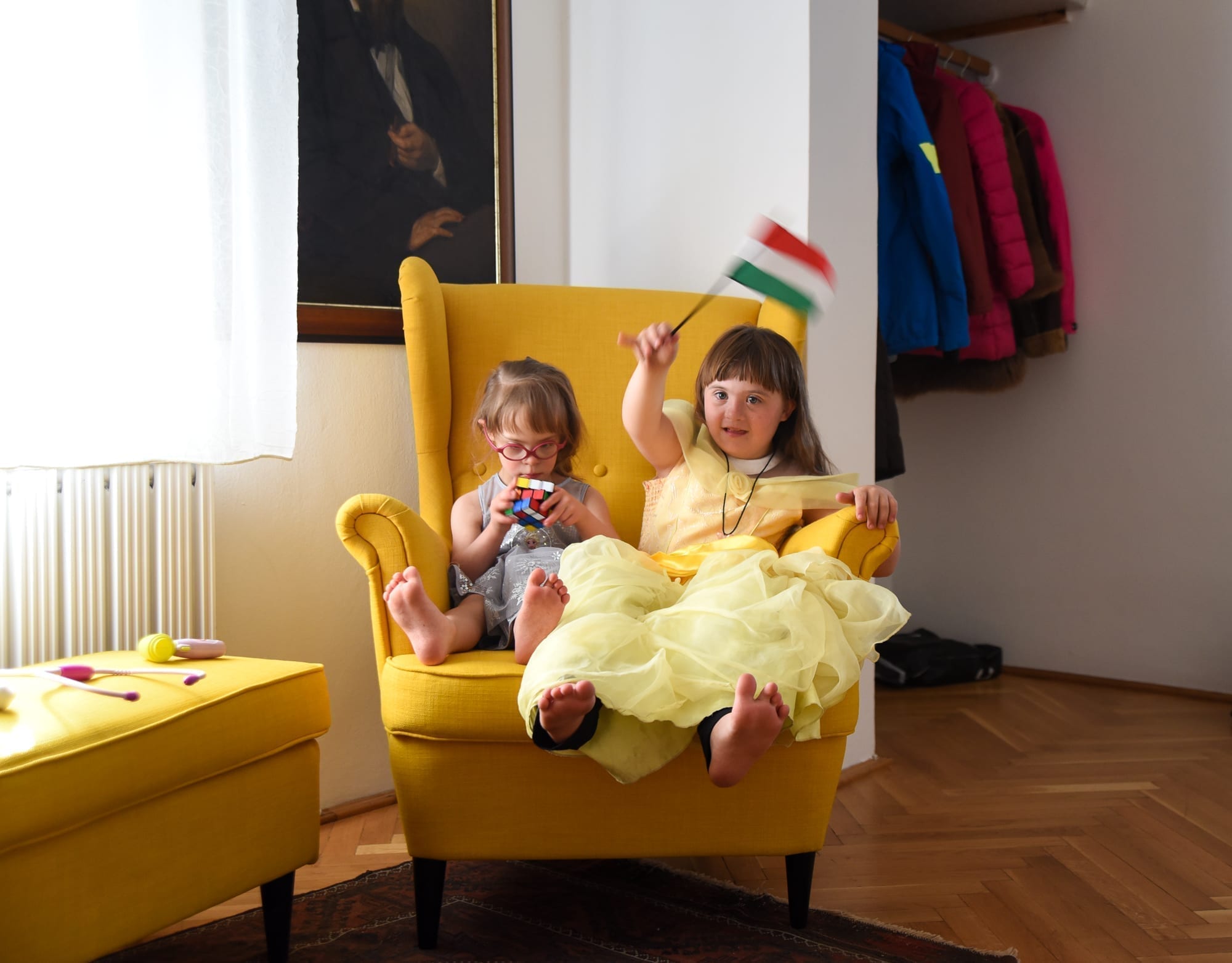 We stayed for hours and were sad to leave. 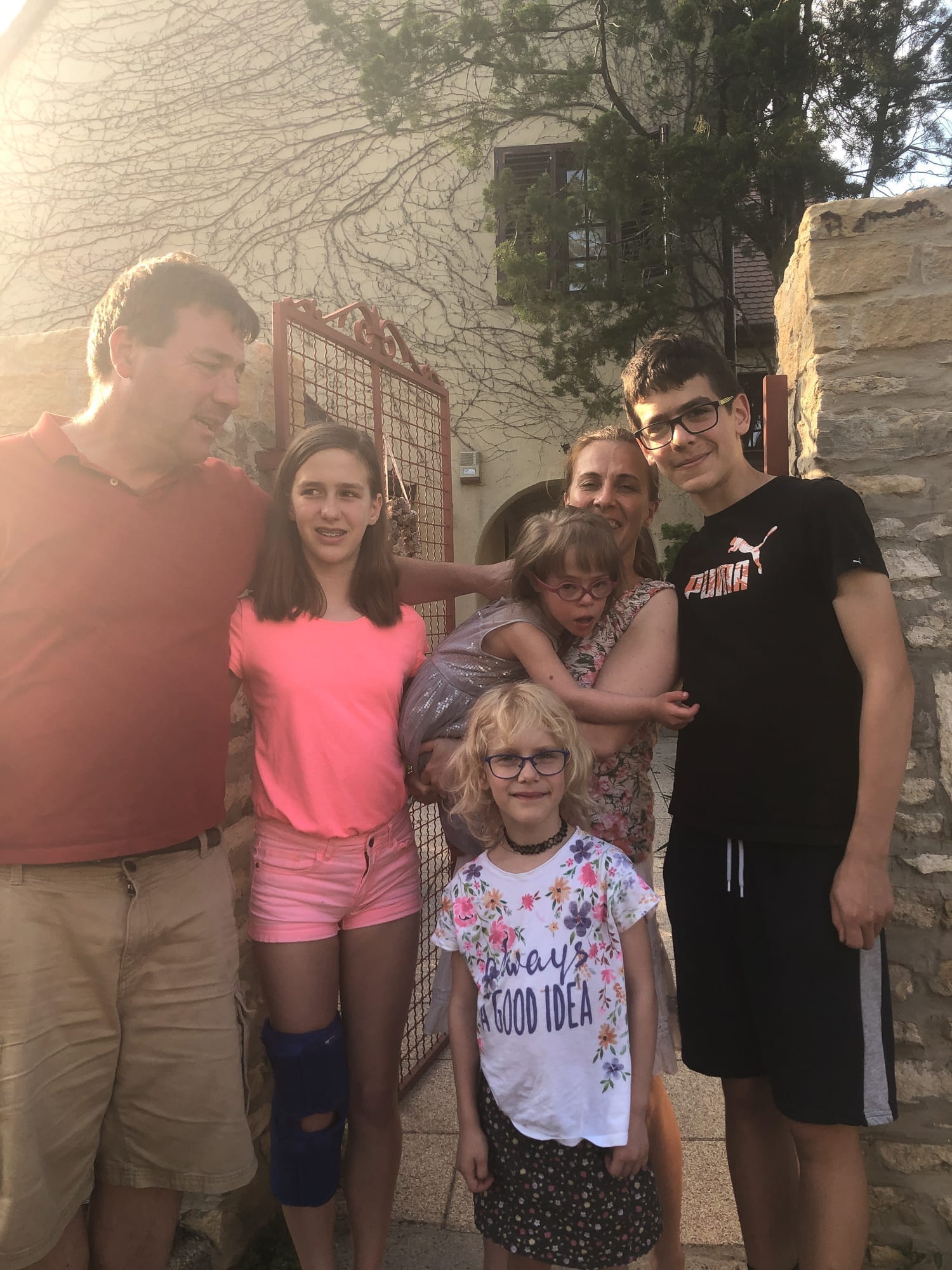 Panka and her family wave goodbye

In one swoop, it felt like all of the magic that travel can bring had been rekindled by connecting with this family, and we all – each of my children and myself included – felt rejuvenated and reinvigorated by the friendships made with the people in Panka’s family and by Panka herself.

They were the absolute, very best part of Budapest for us.

I so enjoyed coming here and catching up on your Budapest posts. I'm so glad a "sunnier" side of the city showed itself and you were able to have a good experience there in the end. Thank you, as always for the tips you share to help others prepare for navigating the local infrastructure.