The call came in early evening.

It was my nephew, my brother Dana’s son, saying that Dana had been airlifted to a hospital in Redding that specialized in gun wounds. He said that they, the hospital staff, had said that Dana was in the Intensive Care Unit ICU), but that he was stable.

When I heard, “gun shot,” followed by “ICU” and “stable,” I thought immediately of the scenes in film where the hero is lying in a white hospital bed and is bandaged, healing. A heart-rate monitor might be around, and quiet would be needed, but our hero was always about to swing his legs over the bed and stand up, ready for more action.

On that day in August 2016, I had friends visiting. I had a husband that was constantly gone and I had three little kids that needed me. I was essentially already a single mother. I couldn’t leave my kids with my husband, and with my friends visiting, I felt bad about taking the kids and leaving. Besides, the hospital staff had said Dana was “stable” and you know what that means. That means he’s about to walk out of there.

The next day I couldn’t focus,

I felt like I was being pulled towards Redding. A constant buzz was going in my head, a low hum that wouldn’t quit. I needed to be in Redding with my brother.

My friends understood – of course they did – and I gathered up my kids and drove the 5 hours that placed us in the hospital with Dana.

This is the thing: we are a gun culture. We have daily reports of gun violence on television, on social media. The stories we create and consume – be it through film, song, dance, or writing – are ever generous in including guns and shooting. We are steeped in guns, shooting and violence, we are raised with it, it’s everywhere in America.

Kids play with water pistols, “bang, bang! You’re dead!” Our heroes chase a bad guy until the ubiquitous shoot out occurs, after which our hero may be scathed but is certainly alive.

None of these scenarios, none of the stories are real.

None of the stories talk about the horror that is really what a gunshot wound is.

It’s like the essence of the viciousness of a gun and the barbaric savagery of the effect of a gunshot is wrapped and hidden in the fun, playful action of gunshot gestures. Pointing our index finger out at someone, fingers curled towards us, thumb up, we make guns of our hands, we click and shoot, usually with a wink, a smile, a nod. “Bang, bang!”

None of this even remotely depicts what it actually is: metal that rips flesh open.

All of this was immediately clear to me in one swift gut-wrenching moment as I walked into the ICU and saw my beloved brother lying there. He was ripped open. “Stable” was full of shit; my brother was RIPPED OPEN by those bullets.

More than anything, I want people to understand this.

I want kids to know what they are actually saying when they play “bang, bang!” I want people who tout the necessity of owning guns, of using them, to see someone they love ripped open by bullets. I want people to know what ripped, open flesh actually looks like.

If and when we do, maybe then we will shift from clamoring for the glory of guns and their bullets that shred skin, slash muscle, gash organs and split lives.

On an objective level I know that it’s futile to keep wishing that I had only known all of this at the time.

But I do wish I had known, I wish I could have had someone to leave my kids with so I could drive immediately over to where Dana was. So close in age, so close in thought and in spirit, Dana was my Irish twin, the yin to my yang, my steady partner in crime. I wonder if my presence in that moment would have changed anything, I wonder if any of that thinking is simply vainglorious, that nothing would have made a difference.

People who allow play guns, who let their kids shoot up in video guns, people who say that guns don’t kill; these people have never seen someone they love ripped open by bullets. As far as the necessity of guns for protection, that’s an excuse. Dana owned a gun; how did that keep him alive? How did that keep him whole? When we lived off the grid in bear, mountain lion and drug cartel country, a barking dog proved to be more essential than a gun.

I don’t tolerate any of that and I will not argue it or listen to the opinions of people who have never walked into an ICU room and seen their loved one with their chest and legs split open, with sponges holding the spaces in which skin should cover.

They’ve never laid hands on their loved one and felt the reverberations of a heart beat so strong, so steady and then suddenly, not at all. 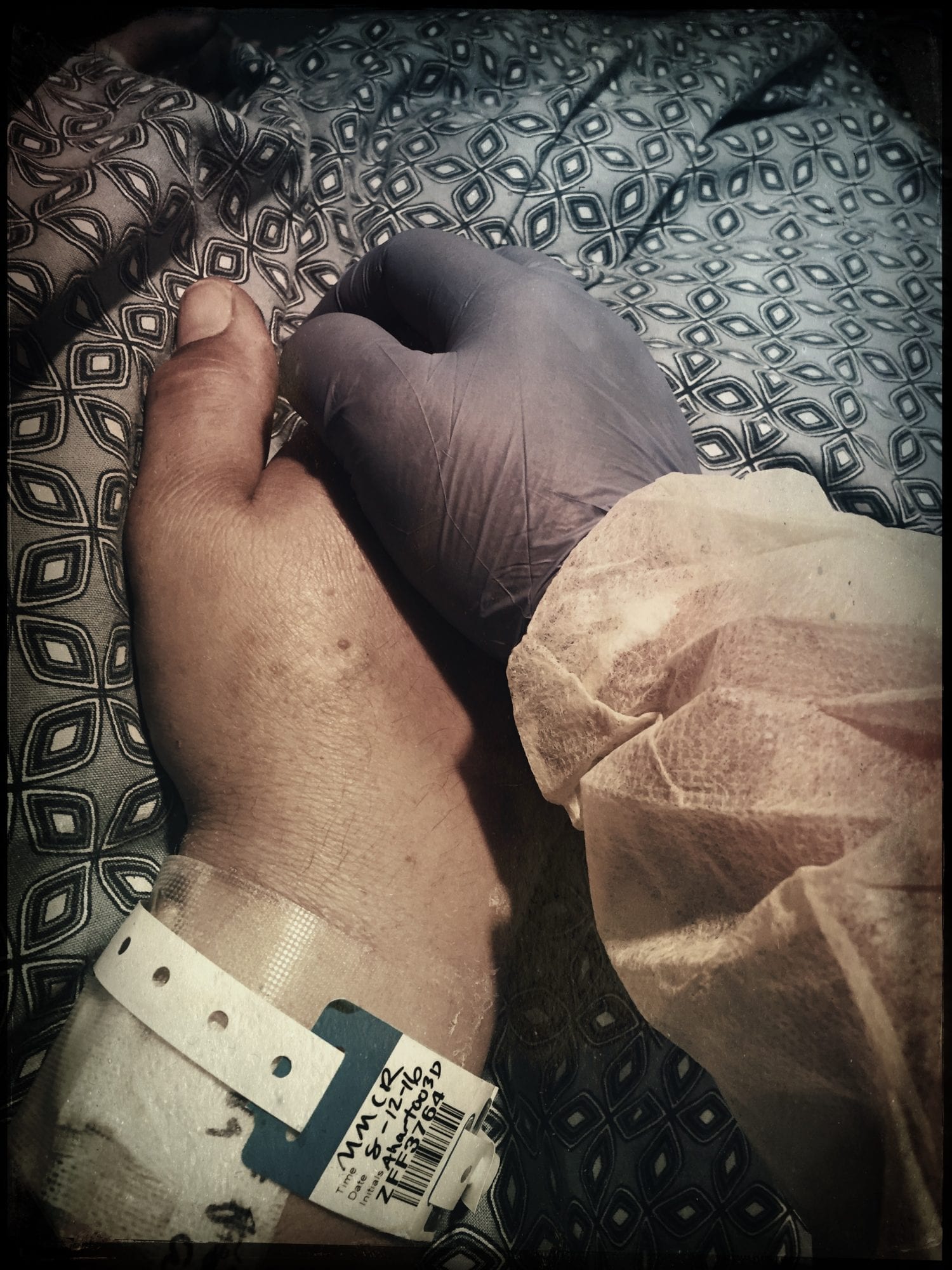 You are so right. Our culture sterilizes the effects of bullets- in movies, in shows, bullet wounds are often a clean in-and-out and you only worry about blood loss. But in reality they tear apart our bodies. I saw someone talk about this on Twitter last week and how this is something that is really missed in the mass shooting discussions.