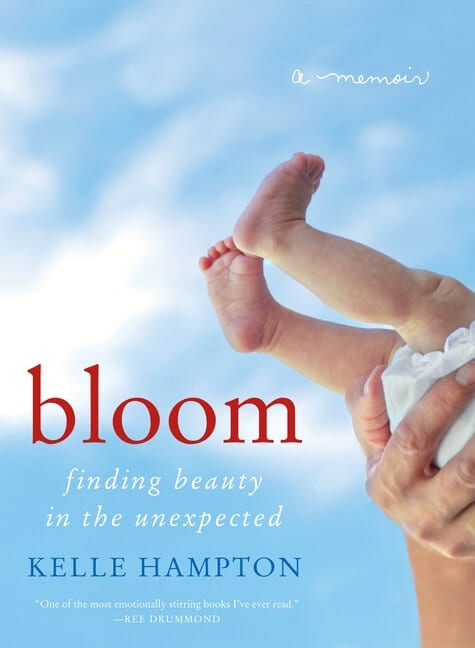 I had arrived in a comfortable place with my feelings regarding Kelle Hampton. I admired the money she raised for NDSS (assuming, of course, that the money isn’t going to padded salaries but rather to assisting individuals with Down syndrome). Happy that she had toned down the seemingly endless tea-parties on her popular blog, Enjoying the Small Things, and had turned some attention to Down syndrome. Because, as you see, she had been lifted high by the Ds community and had accepted leadership but wasn’t stepping up much – besides to stand behind podiums and accept awards.

It was a nice spot, that comfortable spot. It was warm and friendly and I rather liked tapping in to her blog from time to time to see what was new.

Imagine then my astonishment at cracking open her memoir, Bloom: Finding Beauty in the Unexpected

and discovering almost immediately that it must have been written by an entire other.

Using broad strokes full of sweeping generalizations, worn platitudes, exhausted cliches and sophomoric adjectives, Kelle paints a picture of her life. Unlike Monet however, the painting does not become a masterpiece when viewed from a distance. Rather, it’s becomes a mash-up of gloss, painted thick but smelling of tempera – which, when stormed upon, will run.

Speaking of drinking: Kelle and her husband Brett don’t seem to ever talk about problems; rather, they drink through their problems. They have this “unspoken pact” to not “bring the other down” by talking about the things that have real meaning in their lives. Rather, Brett uses his “uncanny ability” in passing out the beers. In her (5 day) hospital stay with her heartbreak over having Nella, Kelle is with her friends while Brett brings the beer. The night she wrote her famous birth story – she wrote through her agony; Brett brought her beer. It seems that at every turn, they are “cracking a cold one.” The former alcoholic in me got thirsty with all that drinking; the wife in me that relied intensely on her husband to pass through her own grief (and yes, despair) at bringing a child with Down syndrome into the world was absolutely at a loss as to how one could go through this without talking about it with one’s partner.

Kelle’s writing about the “hot” therapist and the “hot” doctor in the hospital does nothing for me in developing even a smidgen of a sense of admiration in the loyalty, strength and bond of her relationship with her husband, either. Rather, I was struck at the seeming senselessness of their union – why be together? Just to drink? Get wasted and skinny dip with the neighbors, as she writes of?

The content being what it was for me, I turned to look and absorb her actual writing – the business of crafting sentences, pulling them together with meaning. I think Kelle does a good job of writing in her blog, after all.

I felt lost in a maze of repetition, contradictions (in the very same paragraph!). She likes to cuss, yes, but unlike say, Bill Bryson, she doesn’t insert a well-timed swear word into an elegant sentence, throwing the visual picture into quick comic relief. Nor is she like other authors who just have a potty mouth throughout and it’s a part of who they are, with a writing style being wrapped tight around each and every cuss word. No, Kelle does not cuss like that – she cusses like she’s out to prove how “bad ass” she is, that she’s a “rock star” – and she really, really likes to call herself a bad ass rock star. She throws in her “hell” and her “damn” or whatever like it’s going to hammer that final nail, firmly hanging her neon sign, but coupled with the melodrama with which she drenches her life, if feels a lot more like reading someone’s embarrassing diary from high school than a book that is supposed to pack an inspirational punch.

“Bloom” being as far from an inspiration as a book could possibly be for me was actually depressing. Literally. It triggered an attack of depression. If this book is making bestseller lists (as it is), if this book is receiving great reviews (as it is), then its success obviously stems from the deep and essential pity that the general population feels for a young mother who receives a surprise diagnosis upon the birth of her child with Down syndrome. The success of this book hammers the point of how much further the walk of inclusion and advocacy remains, because I am confident there is absolutely no way this book could be successful on the basis of superior writing.

Furthermore, I honestly do not understand the portrayal she paints of herself as one who finds the good in all things, who fleshes out even the tiniest bit of the positive and “sucks the marrow out of life”. Her life is one blessing after another. She has money. A full backing of friends. She has health, beauty. She even has a gay dad, for crying out loud! What more could one ever ask for? I would believe her ability to be a solidly bright and positive spirit if I saw something in her life – besides having a child with Down syndrome – which was truly a challenge. Getting burned like NieNie maybe. Or growing up poor – or ugly. Or teased. Or abused. Or just…something more than the awfulness of owning a house with 15-year old tiles and not wood floors…Or having a child with Down syndrome… sigh.

On the bright side – the photos – of which there are an abundance – are first-class. Kelle is in over half of them, so obviously some uncredited soul is highly involved. The ones she did take however, are lovely. The photos are extremely important in changing perceptions of Down syndrome, and I acknowledge her for making Down syndrome far more appealing to the mainstream US than it probably ever has – the gloss and “perfection” with which she continues to paint her life includes Nella. Nella – and therefore by extension, Down syndrome – is thus portrayed by Kelle while garbed in fashionable attire, at good angles, in lovely light and with fetching accessories.

I wish I liked this book. I didn’t. I think that while she is a very good blogger, she is not a very good writer – living proof that there is a an enormous difference between handling a blog and writing a book. Furthermore, I am upset that she is a representative of the Down syndrome community, indeed she is the representative. I’d rather have George Estreich

; people who truly know how to craft a memoir. People who have a maturity and depth of understanding regarding Down syndrome and disability that does not include laughing at their friend’s drawing of stick figures of men with large penises under a table at an emotional meeting in which they are present as an honorary speaker.

Or, if they do, have the good sense to not write about it in their books.

George Estreich’s super-fine book The Shape of the Eye has been picked up by a different publishing house and is now available in softcover, with a new cover and as I understand it, an extra chapter (Laura is now eleven!). This book is superb; not just superb as a memoir by a parent of child…

My typically-developing firstborn, Micah, was born in the hospital as a planned C-section due to the fact that he was breech. After he was born, He had trouble latching. The lactation consultants on hand said that his frenulum (the bit of skin that attached your tongue to your mouth) was short and that was the…

Guest post by Sandy Ho on her top 15 book picks for 2016, neatly categorized for ‘who should read’ it and which ones have a disability connection

October is National Down syndrome Awareness Month. It's the month in which we – members of the Down syndrome community – reflect on what a tiny little extra chromosome has brought to our lives by way of our children, our friends, our community.   It's a special time in which we strive to share parts… 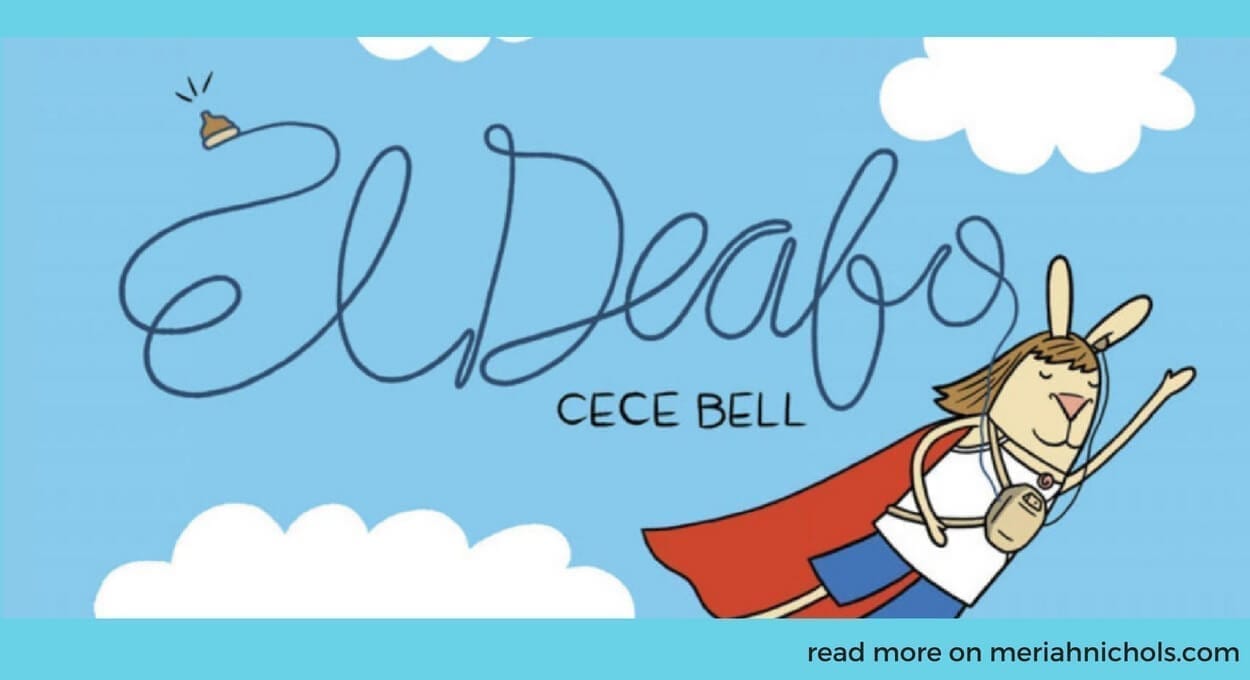 El Deafo Summary El Deafo  is a graphic novel about a young deaf girl. It centers around her deafness and feelings about deafness (and her ginormous hearing aid), with the stories of her friendships, family and school illustrating her points. Now, as a deaf woman, I’ve been recommended El Deafo so much so that a blog…