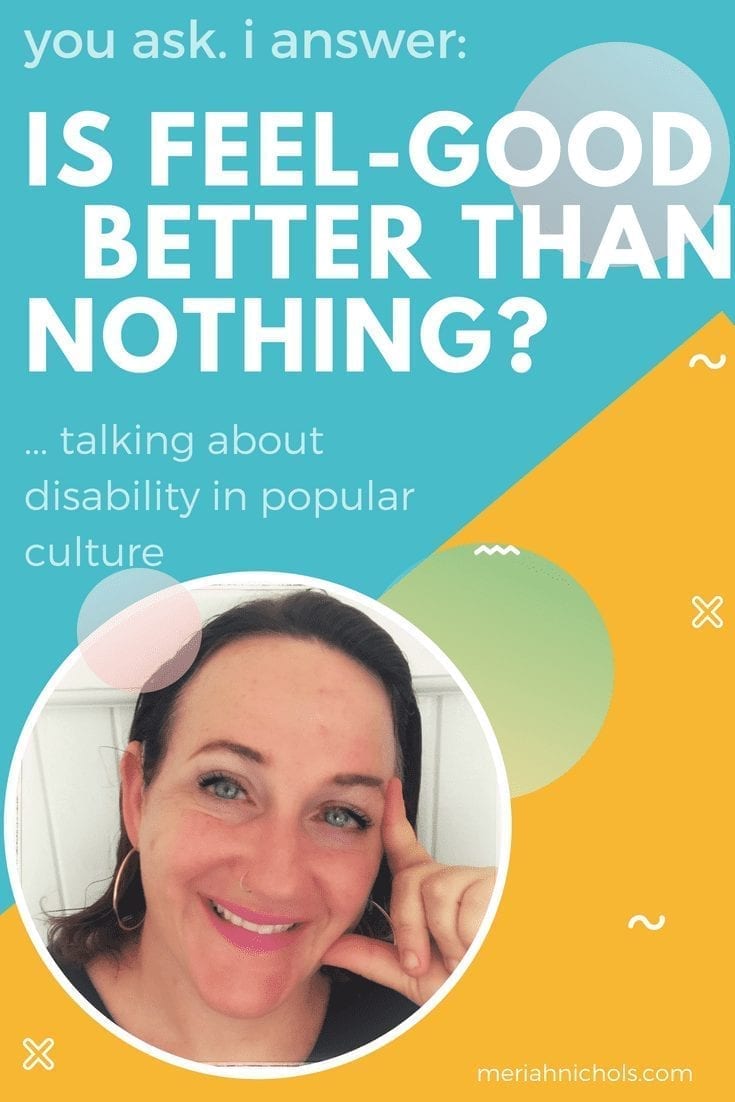 You Ask, I Answer

Ask whatever you want and I’ll answer! This is a new series that pulls questions that you guys ask me and answer them. If you have a question, ask!

….is there not an argument for any coverage is good coverage when it comes to raising awareness, even if that coverage is pure feelgood fairytale??

“Show a people as one thing, as only one thing, over and over again, and that is what they become.” – Chimamanda Ngozi Adichie

Major problems across the disability spectrum include unemployment (and under-employment), sexual abuse, physical abuse, glass ceilings brought about by systemic structure (- that is, earning caps to keep medical benefits and financial nets), and rampant discrimination and prejudice against people with disabilities.

I can’t speak to each element within the collection of problems that we face, but I can speak to the employment piece, since that’s the one that I’ve worked on, with , and around for 15 years.

This is the deal: it’s extremely hard to find a job, create a career, when you don’t feel you have anything worthwhile to bring to the table. An employer asks, “why should I hire you?” and you sit back, all, “uh…. I don’t know… why should you?!”

In my case, I was told all my life that my disability was something that I should overcome. That I was beautiful despite my scars (not because of them), that my (lack of) hearing was a test given by God to me to strengthen me (“with fire we test the gold!“). My abysmally low sense of worth was the perfect ground for sexual abuse – and of course later, mental and physical – to flourish upon.

I’ve talked before about what a shock it was for me to work at and be engaged with the Berkeley disability community. It was huge for me, without question a pivotal experience in my life. It was the first time I had ever – EVER! – seen engaged professionals with disabilities – all kinds of disabilities – working, changing the world, kicking ass. It was the first time I had seen loud and proud d/Deaf people – not only unashamed of who they were, but PROUD OF BEING DEAF.

When I first heard, “nothing about us without us” I cried.

I mean, I ugly-cried, it spoke so deeply to my mind (so tired of people with disabilities telling us how to be), and viscerally to my heart (yearning to connect with my own power).

Chimamanda Ngozi Adichie said, “show a people as one thing, as only one thing, over and over again, and that is what they become.” While she was referring to Africans and race, it applies in this case to us with disabilities.

You see, when we are portrayed as inspirations (like in the movie Wonder, and oh, all over the place in mainstream American culture), when we are seen over and over again as “angels” (in the case of Down syndrome), when we are perpetually put into a one-dimensional box, a part of us becomes that.

Or rather, there is a part of us that becomes that – or thinks we should be that way, but the greater part of us feels the discrepancy between what we know ourselves to be and what society is telling us we should be, and let me tell you something:

In my opinion, one of the roots to the problems that our community faces is in the objectification of us who have disabilities. It’s telling us over and over again that we are to be pitied, that we have to overcome intrinsic parts of who we are – parts of us that WILL NEVER CHANGE, no matter how much therapy we engage in!

It’s our families, schools, surrounding social imagery and culture telling us that the only real value that we have to offer people is that of inspiring them (through dint of our disability alone).

It’s growing up without understanding the value of our disability in and of itself (because all disabilities have value – but we need to figure out what that value is).

It’s society telling us that we are angels, and angels don’t need fair pay for fair work, angels don’t need intimacy or sex, and -the flip side of the coin – who would sexually abuse an angel? – so the “angels” are unprotected.

It’s us not tapping into, harnessing and developing our strengths. We aren’t told we are strong; we are told we are weak and need help. And what happens when we are told something again and again? Right. We become it.

This is the danger of these messages. We are NOT raising awareness with movies like Wonder.

Movies like Wonder are NOT better than nothing, because they play an active role in perpetuating this culture of objectification of a person with a disability, of us disabled. This type of imagery is actively telling kids with disabilities that they are inspirational solely on the basis of disability.

And that’s just not true.

I’m going to go a step further and say that the attitude actually hurts us, because it causes mainstream society to actually believe that of us (- “show a people as one thing, as only one thing, over and over again, and that is what they become…”), that we are these one-dimensional creatures upon whom pity should be bestowed, that we are not capable of more than what they think we are capable of, and that we need to try and be more like THEM.

And the inattention to disability intersections and attitude hurts us because mainstream simply can’t understand what a vital role healthcare plays in our lives (- in Wonder, who paid for those 27 surgeries that Auggie had??), what we would be capable of if we were not bound by the constraints of the system.  It doesn’t drive the message home of the fact that if you have a disability and you are a person of color, your life is in literal danger from systemic violence, lack of disability diagnosis, and police brutality.

I could go on. But I won’t. I think you got the point: No, I do not think that a feel-good inaccurate representation of disability is better than none.

People with Down Syndrome Can Be Assholes Too

I agree so much with this. However I find that people actually get very angry when I share this viewpoint. They've told me how negative I am and how I should be happy that people with disabilities are in the mainstream at all. I shared my thoughts on Wonder, mainly it bothered me that Auggie's parents wanted everyone to know he was not "retarded." Having a ID is the bottom of the barrel, to a lot of people. To me that translated to, my kid might look different but at least he isn't stupid. After that part in the book, I couldn't really shake it. I was curious though, if there was a movie that you've found to be a better representation?

I know what you are talking about! I get that too!! It really sucks, doesn't it?!

You know, the movie that kept coming to mind as I was writing this post was "Dory". I really liked the main handling of disability - I was about to write about it in this post but then I remembered the.. walrus? What were those creatures on the rock? The one with the pail? That was not cool. Everything else about Dory was great though.

I need to pull together a short list of better examples of how to talk about disability realistically and in a way that is helpful. Sometimes those movies have nothing to do with disability - they might be a movie about race or sexual identity or orientation that were just directly comparable to me.